Creative and dynamism is the nature of Consciousness

Besides being luminous, consciousness is also creative and on account of its creativity that the universe in its entire diversity has come to being. Just as the seed, though so small, gives rise to the tree of even the largest size, even so consciousness, though infinitesimally subtle, has given birth to the universe of so gigantic a size. When the Katha Upanishad describes the universe as primeval with its root lying above the branches extending downward, it indicates to the creativity of consciousness characterised as the lustrous, Brahman and immortal besides having the universe rooted 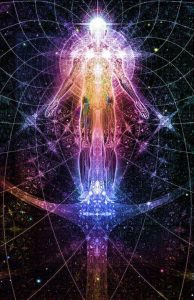 in it and dependent on it (Kath.Up.VI.1). Reference to consciousness as Brahman indicates its expansive nature and it is creative as well. Had it not been so, consciousness would not have undergone the process of subject-object cleavage, transformation into the physical, variation of the latter into gaseous, liquid and solid, recovery of the vital of the physical and of the mental out of the vital.

Idea of Rita in the Veda elucidates the above proposition still better. Rita is the cosmic principle of eternal dynamics. The dynamics comprises the physical as well as the mental and spiritual. Whatever is happening in the universe, be it in the interrelationship of galaxies of heavenly bodies, inside each one of the bodies down to the microscopic particles and even lower than that, in the interrelationship of living being or in the working of the mind of any particular living being including man, everything and every being in it is governed by this law of dynamics.

It is due to the operation of this law that galaxies and heavenly bodies keep themselves maintained in their own ways, atoms and particles remain sustained in their peculiar modes of behavior, living beings evolve out of energy and matter, procreate and grow in their singular ways, have their singular psychologies, desires and aspirations. In fact, any kind of order be it physical or psychological, prevailing in the universe, is due to Rita. Rita basically is of the nature of consciousness, as is evident from the term Rta-chit used several times in the Rigveda (RV I.145.4; IV.3.4; IV.16.10; V.3.9; VII.85.4).

Lying on high pedestal of consciousness, this principle has provided laws of being and action to one and all in every respect of their existence. This has been possible owing to Rita being the principle of chit, consciousness, rather than that of achit, inconscience or physical force. Submersion of self-consciousness into the potentiality of energy must have taken place prior to emergence of the space-time continuum, as the latter is rather a product of the play of the energy. This is evident from the theory of Big Bang showing how space and time happened to be born with the explosion in the primeval ball of fire which in itself cannot but be a formation of the energy.

While not in a position to condescend to this extent in regard to the origin of the space-time continuum, the Veda has a definite indication to its admissibility to the view that the continuum could not have emerged anyway prior to the submersion of the self-consciousness into the self-oblivion creating thus the scope for its getting rendered into the potentiality of physical energy. This is evident from the very next mantra of the Aghamarshana Hymn in which the seer circumscribes the origin of time in the ocean of energy (RV X.190.2). Thus, while the physical energy is a product of inversion of the self-consciousness of consciousness, space-time continuum is a by-product of the same event of inversion.

The Four Stages of Pranayama

Glimpses of Yoga in Vedic Samhita – 3 of 4
Yoga, the science of restoration of collective consciousness – cidakasha – 3 of 9
Comment