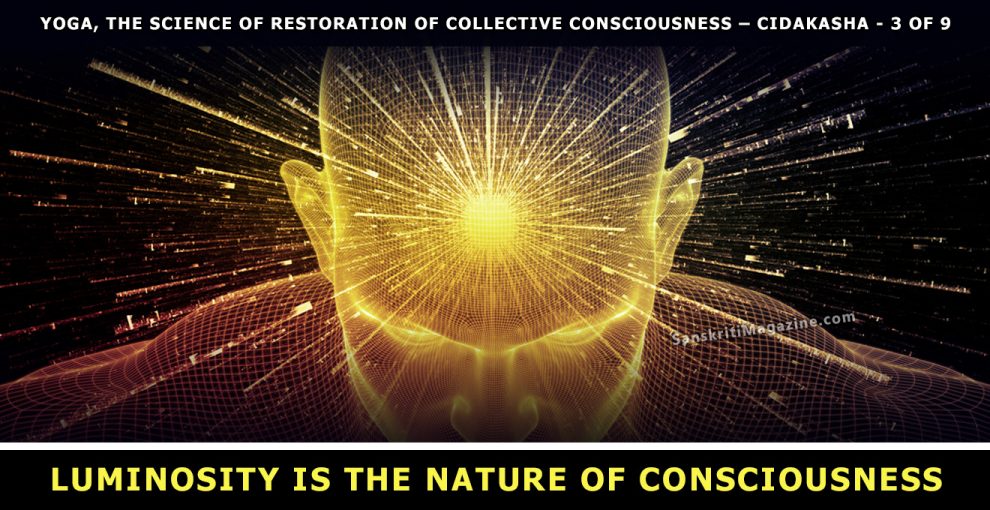 Luminosity is the nature of consciousness

Luminosity is another feature of consciousness which is rarely taken note of in practical life but it has been dealt with most exuberantly in the Vedas, Upanishads and Yogic literature. We see things in the external world by virtue of this feature of consciousness. Physical light, be it solar or electrical, only helps us in the act of seeing by just removing the darkness around the object concerned. Any luminous object does not require any such aid for its being seen. The real power of seeing rests in the consciousness of the seer himself. Visualization of objects around him by the blind and seeing of objects in the state of dream by ourselves are direct proof of the luminosity of consciousness.

The king further asks the sage about any possible source of light in the state of total absence of even word or speech. Being asked so, the sage indicates to the light of consciousness as enshrined in one’s self as the last resort of the person concerned in the event of failure of all sorts of light including what figuratively he had described as the light of speech (IV.3.1-6). By turning to speech as a light, he crossed the threshold of the physical in his search for light. The deliberately spoken word of indication is obviously a manifestation of consciousness. In this act of embodiment, consciousness takes the help of the physical in the form of the wave of sound. While physical light is a manifestation of the electro-magnetic wave passing through space, sound is the attribute of space itself. Thus, the wave of sound is direct connecting link between consciousness and the physical light.

Taking cognizance of the luminosity of consciousness, the yogins have drawn a clear line of demarcation between the physical and the spiritual. It lies in the description of the physical as simply a light but the spiritual as the light of lights. This is evident from the very first mantra of Yajurvedic Shiva-sankalpa hymn where the higher mind has been characterized as the light of lights (YV.XXXIV.1). Light of mind is the light of consciousness while the rest is that of the physical luminaries. While making this statement, the seer is absolutely clear about the primacy of consciousness vis-a-vis the physical in regard to the luminosity on the psychological level as well as in terms of genesis. This becomes evidently clearer from a statement made in the Aitareya Upanishad. The Upanishad says that all the psychological faculties and functions, such as sensation, mentation, feeling, emotion, intuition, awareness, understanding, knowing, insight, wisdom, desire, power of retention, super intellection, memory, determination, etc. on the one side and the five basic elements along with all their products, organic and inorganic both, on the other, are nothing but formulations and products of consciousness (V.1-3).

The Chandogya Upanishad indicates the same status of consciousness in a different way. It lies in seeing oneness between the trans-heavenly and the intra-psychic light. It states: “Now the light shining beyond the heaven, behind the universe, behind everything, in the highest of the worlds as also in the world next to the highest, is the same as is shining in the inner being of the individual (III.13.7).” The light lying beyond the heaven must be the light serving as the source of the universe in all its physicality. The intra-psychic light is consciousness in all its psychic luminosity. The equation of the extra-cosmic with the intra-psychic is clear indication that the former also is nothing but consciousness.

This idea underlying this equation is also deeply rooted in the Rigveda, which though cryptic. In this mantra, the seer refers to seeing the light of the primeval seed of creation shining beyond the heaven which is loveliest to dwell in. (RV VIII.6.30).