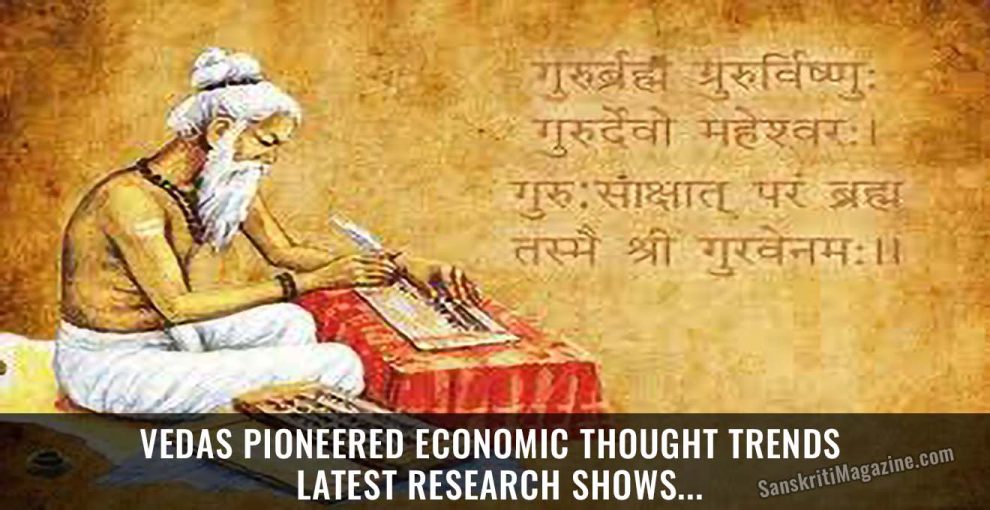 The research paper published by Professor Satish Deodhar (Economics Area) of Indian Institute of Management (IIM)-Ahmedabad also says that there has been a general lack of awareness about the economic thinking that emanated from ancient Indian texts.

The paper published recently refers to various ancient Indian texts and the economic thoughts expressed therein as it looks into the reasons why they have gone unnoticed.

The senior professor blames foreign invasions and the British rule for “scant attention” paid to the history of Indian economic thoughts.

The pre-classical economic thoughts that appeared in the Vedas dating a millennium prior to the Greek writings culminated in their comprehensive coverage in the treatise Arthashastra by Kautilya in the 4th century BCE, but have remained largely unnoticed, the research paper states.

The Indian ancient economic thoughts has its origins in the Vedic age, it adds. “The history of Indian economic thoughts goes back to Vedas which were first composed at least three millennia ago. The expressions of early economic thoughts were grounded in the socio-cultural and material environment that existed then,” the paper says quoting texts from the Rig Veda and various other Indian scriptures.

Professor Deodhar says though disjoint and scattered in different texts, these thoughts were profound and did get collated and improvised over centuries. “The treatise on political economy, Arthashastra, written by Kautaliya in fourth century BCE, came out of the crucible of the Vedic and other secular texts,” he says. The paper gives minute details of economics principles laid down in the Arthashastra.

Discovery of many of the ancient texts, their translations into English and their exposure, both to domestic and foreign researchers, began only in the early twentieth century, if further says.

“In fact, the Arthashastra was discovered only in the early part of the 20th century, in the possession of a pundit from Tanjavur, Tamil Nadu, a region that was left mostly unharmed by the Muslim conquests. It was transcribed and published in English in 1915 by Dr. R. Shamasastri of the Mysore Oriental Library, and, it took several more decades before it became known to rest of the world,” it says.

“However, the colonial preconceptions about ‘backwardness’ of Indian society resulted in focus of academic research mainly on the otherworldly nature of the Indian tradition,” the paper says.

“The hangover continued after Independence, where economist such as R J Krishna, pejoratively referred to India’s slow GDP growth rate as the ‘Hindu Rate of Growth’.”

In fact, having copied the command-and-control model of the Soviet Union, the slow growth rate was the Socialist Rate of Growth. “A corollary of these developments was that only scant attention was paid to the history of economic thought that emerged in the Indian subcontinent,” the paper says.

If the Sanskrit grammarian Panini came up with nomenclature for compound interest circa 700 BCE, it was Kautilya who understood the relation between interest rates and risk and uncertainty, it says. “In contrast, the western world had looked down upon interest as usury until a millennium after Kautilya’s treatise,” it says.

The paper quotes numerous verses on economics from ancient Indian texts. It also quotes various verses on how poverty was considered as a bad state to be in.

The research paper further says that the original ‘varna’ system which degenerated into present caste system, was invented for division of labour.

“Clearly, the division of people among four varnas — Brahmin, Kshatriya, Vaishaya, and Shudra i.e . knowledge seeker, warrior, tradesman, and artisan/cultivator — was based on guna-karma (aptitude driven vocation) and not birth,” the research paper said quoting various verses from ancient texts.

“In contrast to varnas, the endogamous jati system prevalent in India was not ordained by the Indian sacred texts,” it says.

The intent of the paper is to present and give recognition to the economic thought that had emerged in ancient Indian literature, professor Deodhar said.

“Had this literature been accessible to the occidental thought during the middle ages and the mercantilist period, classical economics might have evolved much earlier,” the study says in conclusion.