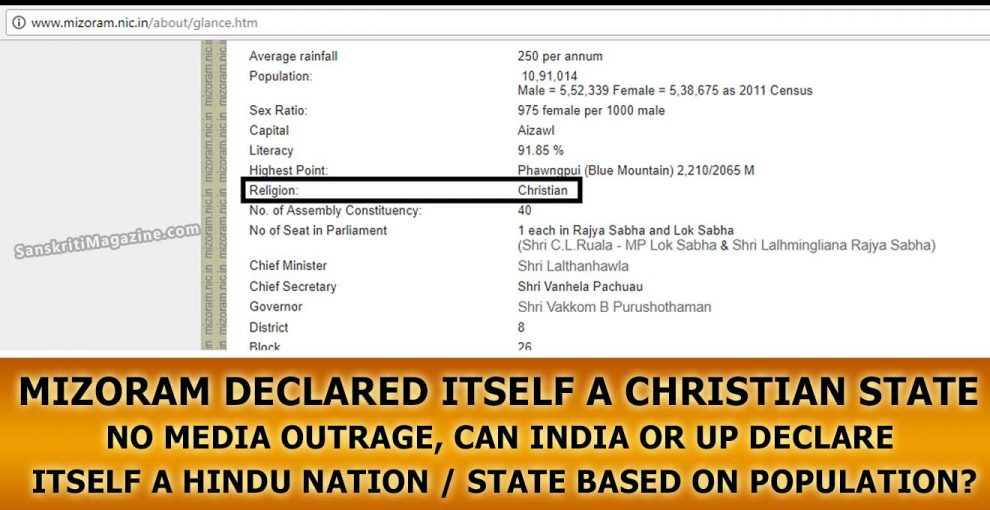 India is a “secular” country, according to our Constitution, everyone has freedom to follow any religion, they can celebrate the festivals/rituals of their faith and there will be no one who will question them.

If anyone asks about the religion of India then we answer him that “India is a secular country and it has space for every religion. In India, we have almost 10 religions booming and Hindus are in Majority followed by Islam.”
ndia is birthplace of four major world faiths:

Despite having 79% Hindus population in India (according to 2011 census), India doesn’t claim it to be a Hindu nation. Even if one or the other party demand to make India a Hindu Nation the liberals and seculars of India rip them apart. Recognized People start returning their Awards, Aamir Khan’s wife starts thinking of staying outside India, Hamid Ansari gets the feeling that Muslims are not safe in India and Barkhas and Ranas and Ravish start chest beating.

But if a state of India does the very same and claim that it is a Christian State, no one comes out in the middle and return awards, no one even utters a word forget a prime-time debate.

Mizoram claims itself a Christian State but no outrage we have ever seen. We went to the official website of Mizoram and we were shocked by the claims made on the website:

Now, just imagine Yogi Adityanath of Uttar Pradesh declares UP a Hindu State, we all can understand the amount of outrage coming from the Liberals, there will be prime time debates, there will be intolerance debates.

There is no surprise that recently Coward, spineless, ignorant, bigoted #Christian converts burn and break Lord #Ganesha‘s Murti and National flag in full public view in Lunglei town in #Mizoram.

There is not much difference in Jihadi scumbags and spineless christian converts.. they are both the same… PATHETIC. When you spread hate then don’t expect flowers in return, you will get what you deserve.