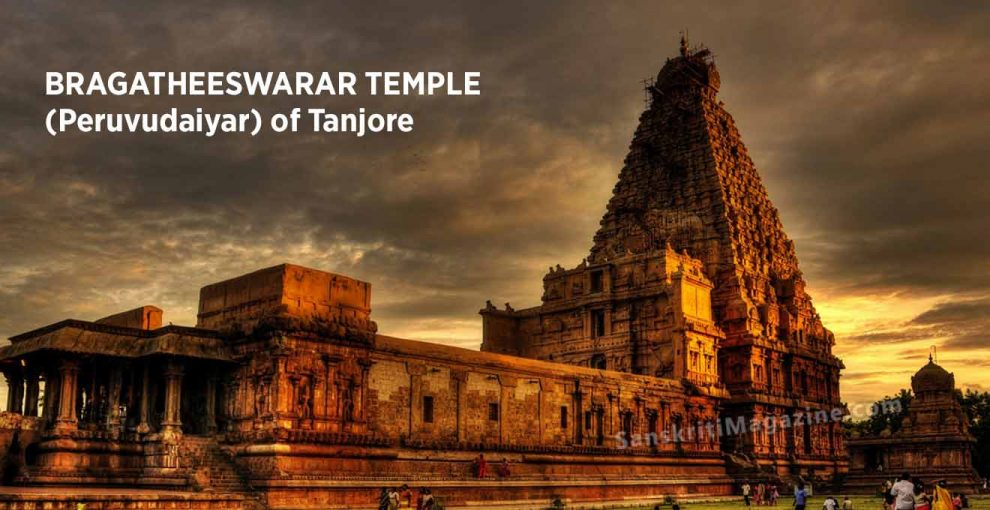 Bragatheeswarar (Peruvudaiyar) Temple, also known as Big Temple. “In the twenty-fifth year of Raja raja Cholan (A.D 1009-10) on the 257th day of the year the king handed over the copper pot for the finial at the top of the Vimana”. It weighed about 235 lbs., and was overlaid with gold plate of weight of 292.5 Kalanju or nearly 35 lbs.

Raja Raja Chola I, the greatest of the Chola Monarchs. During his reign (985 – 1014 AD) he brought stability to the Chola Kingdom, and restored from obscurity the brilliant Tevaram hymns of the Saivite Nayanmars from obscurity. Raja Raja was a great builder, and the Peruvudaiyar Koyil or the Big Temple at Thanjavur was his creation. His son Rajendra Chola (1014 – 1044 AD) was a greater conqueror who marched all the way to the banks of the Ganges. This march was commemorated with a new capital Gangaikonda Cholapuram and another ‘Periya Koyil’. Gangai Konda Cholapuram was the capital of the Cholas for about two centuries, although it is nothing more than a village now with this rather well maintained magnificent temple. 35 Kilometers from Thanjavur lies Darasuram, once known as Rajarajapuram – a part of the Chola’s secondary capital of Pazhaiyarai. Here is the Airavateeswarar Temple built by Raja Raja II (1146 – 1173). 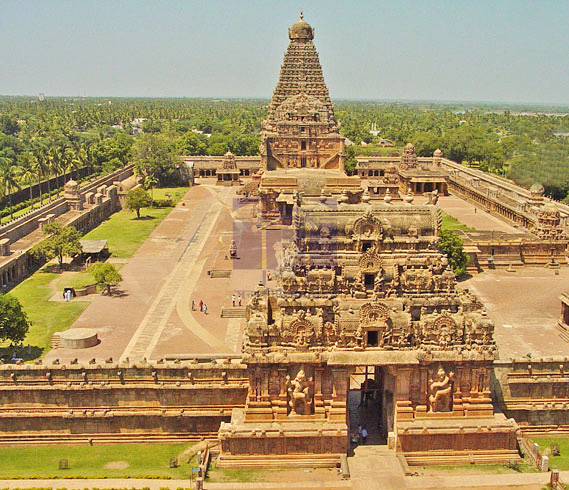 It was during the reign of Kulottunga III (1178 – 1218) that the Kambahareswarar temple at Tribhuvanam was built.These four temples under discussion stand out from the others in Tamilnadu in that; it is only in these that the Vimanam towers over the entrance Gopurams. After these four temples, the Cholas went back to their traditional style of building temples with larger Gopurams and smaller central Vimanams. These temples are fitting memorials to the glory of the rulers that built them, as well as monuments of piety and a committment to art and architecture.

A 107 paragraph long inscription on the walls of the Vimanam records the contributions of Raja Raja Chola and his sister Kundavai to the Thanjavur temple. The temple stands within a fort, whose walls are later additions built in the 16th century. The towering vimanam is about 200 feet in height and is referred to as Dakshina Meru. The octagonal Shikharam rests on a single block of granite weighing 81 tons. It is believed that this block was carried up a specially built ramp built from a site 6 kilometers away from here. Huge Nandi’s dot the corners of the Shikharam, and the Kalasam on top by itself is about 3.8 meters in height. 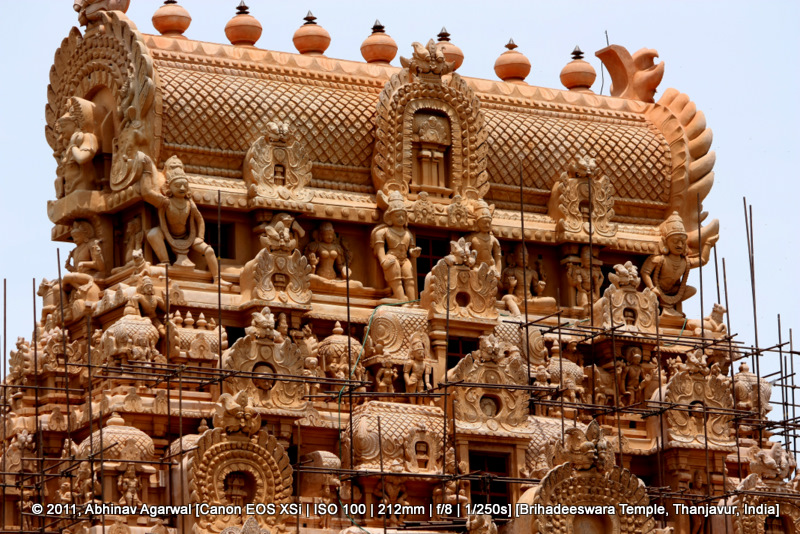 Hundreds of stucco figures bejewel the Vimanam, although it is possible that some of these may have been added on during the Maratha period. The Shivalingam – Peruvudaiyar, Rajarajeswaramudaiyar – is a huge one, set in a two storied sanctum, and the walls surrounding the sanctum delight visitors as a storehouse of murals and sculpture.The long prakaram surrounds the great temple (500 feet/250 feet), and the walls surrounding the prakaram again go back to Raja Raja Cholan’s period. 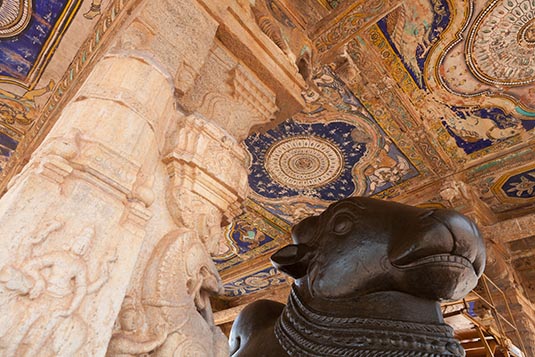 The walls house long pillared corridors, which abound in murals, Shiva Lingams and Nandi’s. The Periya Nayaki temple within the temple is a later addition from the Pandya period, and so is the Subramanyar Temple sung later by the Saint poet Arunagirinathar.Incidents from the lives of the Nayanmars, several of the 108 Bharata Natyam Dance postures, manifestations of Shiva (Aadalvallaan – Nataraja, Tripurantaka, Dakshinamurthi etc.) are depicted in sculptured panels or in exquisite Chola murals. 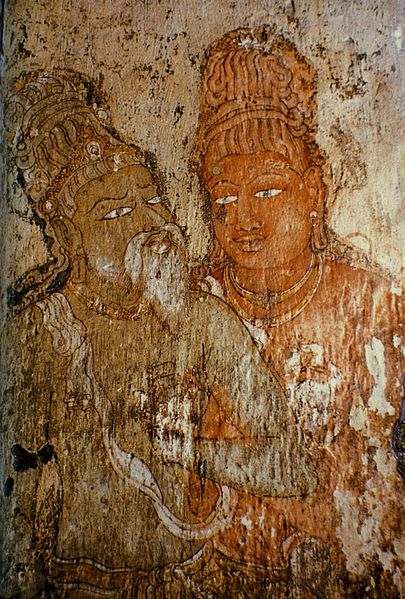 Both the interior, and the exterior walls of the temple, are replete with images of the kind described above.The sanctum, the ardhamandapam, the mukhamandapam and the Mahamandapam, although distinct, form a composite unit with an imposing appearance that awes visitors, forcing one to wonder how such timeless architectural feat was executed about a 1000 years ago. Entrances to the Mandapams and the towered entrances to the Prakarams are majestic.

The grandeur of the architecture and the sculptural finesse speaks volumes of the skills of the Imperial Cholas.Inscriptions refer to Shiva as Dakshina Meru Vitankar and Aadavallan. The Nandi, which dates back to the Nayak period, is housed in its own mandapam and it matches up to the grandeur and size of the temple. It is a monolithic Nandi weighing about 25 tones, and is about 12 feet high and 20 feet long.

Rajarajeswaram, as the temple was named by its founder, fills a large portion of the small fort (Sivaganga Fort), encircled by moat on the east and west, the Grand Anaicut Channel (Putharu) on the south and by the Sivaganga Garden on the north. The temple entrance has an imposing gateway on the east, on either sides of which stand two small shrines dedicated to Ganapathi and Murugan and further through there is another Gopuram 90 feet high. This way leads into an outer court.

A second and magnificent Gopuram further leads into the main court in which the temple is built. The inner court is about 500 feet long and 250 feet broad, is well paved with brick and stone. The court is surrounded on all sides by a cloister. The western and northern wings have Sivalingams consecrated therein and there are paintings over these walls depicting sixty-four Nayanmars, sacred sport of Siva. The outer measurement of the temple is 793 feet by 397 feet.

The main shrine of Sri Brihadisvara, the Great God – a Sanskrit rendering of the original Tamil name Peruvudaiyar- stands at the western end of the main court. It comprises of five divisions – 1. Garbhagriha or the Sanctum Sactorum and the corridor around it 2. Ardhana-Mandapam 3. Maha-Mandapam with the open aisles 4. Stapana-Mandapam with the shrine of Sri Thyagarajar 5. Narthana-Mandapam for the temple paraphernalia and where the servant waits; and 6. Vadya-Mandapam and portico for the musicians.

Main shrine has three portals named Keralantakan, Rasarasan and Thiru-Anukkan. These portals are guarded by Dwarapalikas or the guardians of the gate. They are of huge proportions and of exquisite workmanship. There are several sets like these in the temple, of which seven of them are 18 feet by 8 feet. They are all monolith, and some are of very high artistic merit, especially at the entrance of Sri Subramanya temple.

The Sivalinga of Sri Brihadisvara is probably the grandest in existence. This image was originally called Adavallan (the one who is good in Dance). Another name was Dakshina-Meru Vitanken. Both the names occur in Thiruvisaipa as the names of the deity are as same as in Chidambaram Temple. This possibly indicates that the Saiva creed derived its support at the time mainly from Chidambaram. Rajaraja Cholan calls the image Rajarajeswaramudaiyar – The Lord of Rajarajeswaram. The tower over the shrine is named Dakshina-Meru after the abode of Lord Shiva at Kailasam, the Uttara-Meru.

Sri Thyagaraja, also called Vitankar, worshiped within a portion of Stapana-Manadapam, is the patron deity of Cholas. The legend goes that their mythical progenitor Chola Muchukuntan helped Indra against the asuras, for which help, he was presented with seven images of Thyagaraja, which he installed in the seven holy places of Thiruvarur, Thiru-nagai-karonam, Thiru-kkareyil, Thirukolili, Thirumaraikadu, Thirunallaru and Thiruvamur which are known as Sapta-Vitanka-Kshetras. Rajaraja Cholan was a devout worshiper of Sri Thyagaraja at Thiruvarur where he built this great temple; and, consecrated Sri Thyagaraja at Thanjavur also, as a mark of his own piety and in commemoration of the exploits of his celebrated ancestor.

The great Vimana is of the Dravidian style of architecture. It rises to a height of about 216 feet, a tower of fourteen storeys, finely decorated with pilasters, niches and images of gods of the Hindu pantheon. The basement of the structure which supports the tower is 96 feet square. The sikhara or cupolic dome is octagonal in shape and crowns the Vimana. The gilded Kalasa or finial, over dome is 12.5 feet high. It is believed that the sikhara and the stupi does not throw on the ground. The dome rests on a single block of granite, of 25.5 feet square. Two Nandis, each measuring 6.5 feet by 5.5 feet beautify each corner of the stone which is estimated to weigh about 80 tons, and is believed to have been conveyed to the top of the tower by means of a inclined plane commencing from Sarapallam (scaffold-hollow), four miles north-east of the city. 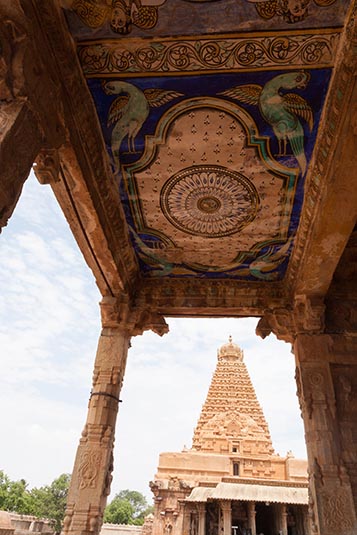 Shrine of Sri Subramanya in the northwest corner, Shrine of Goddess Sri Brihannayagi, Sri Chandeeswara Shrine, Shrine of Ganapathy, Shrine of Nataraja in the north eastern corner, the colossal monolith figure on Nandhi, the sacred bull, in the central courtyard and the Shrine of Karuvurar.

The Nandi within is elaborately worked and the Nayak Mandapam is massive and striking. The Nandhi is 12 feet high, 19.5 feet long and 18.25 feet wide. The Nandhi is a monolith weighing about 25 tons and the stone is said to have come from a bed of Gneiss at the foot of Pachaimalai near Perambalur. Another version is that the stone was brought over from the bed of the River Narmada in the north. There is a tradition that the Nandhi is growing in size with the progress of time. 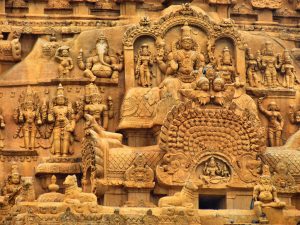 It was feared it might become too large for the Mandapam erected over it and a nail was driven into the back of it, and since, its size has remained stationery. Two portrait statuesques on the front pillars of the Nandhi Mandapam are pointed out as those of Sevappanayakan (the first Nayak ruler) and of his son Achyutappa Nayak.

The Chola frescos painting discovered in 1931 by Mr.S.K.Govindasamy of Annamalai University within the circumambulatory corridor Aradhana Mandapam are of great interest. These are the first Chola specimen’s discovered. The passage of the corridor is dark and the enthusiast finds the walls on either side covered with two layers of paintings from floor to ceiling. Those of the upper layer are of the Nayak period, as certain labels in Telugu characters mentioned the names of Sevappa, Achyutappa and others. The Chola frescos lie underneath. An ardent spirit of saivism is expressed in the Chola frescos. They probably synchronised with the completion of the temple by Rajaraja Cholan. Saivism was at its height at that time and the Cholas were predominently of that faith.