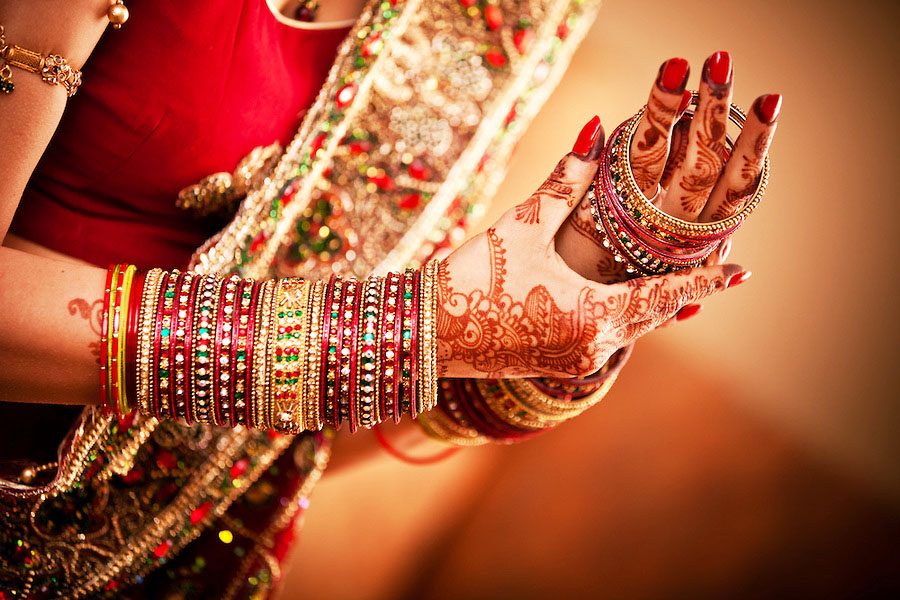 The tradition of wearing of bangles in India began in ancient times. Even today, womenfolk love to enhance their feminine grace and beauty with the help of bangles that are available in variety of forms. The word bangle has been derived from the Hindi word bangri or bangali, which in Sanskrit means the ornament which adorns the arm.

History of Bangles in India

There is strong evidence which shows that women have been adorning their arms with bangles since ancient times in India. One of the oldest art objects in India, the bronze figurine of a dancing girl excavated at Mohanjodaro epitomizes the antiquity and the universality of wrist ornaments in India. The figurine stands in the nude with one arm at her hip, the other arm completely weighed down with a collection of bangles. Even the Yakshinis are depicted wearing bangles. Banabhatt’s Kadambari has a reference to Goddess Saraswati – Goddess of Learning, shown as wearing kangans. Ancient fragments testify that bangles were made from terracotta, stone, shell, copper, bronze, gold, silver, lac, glass and almost any material that lent itself to craftsmanship. From simple plain circlets of metal, to ones decorated with etched and exquisite designs of bird and animal-head terminals and studded with gems, bangles in various forms existed in ancient in India.

Significance of Bangles for Married Women

Wearing of bangles is considered a must for a married woman in India and are considered to be an important part of Indian bride’s jewellery. In certain communities, there is a custom which says that gold bangles should not be worn alone by married women and should be teamed with glass bangles, popularly known as ‘kaanch ki choodiya’, as it symbolizes well-being of husband and sons. In some communities women are so superstitious, that even when changing bangles, they never allow their arm to be completely bare. A simple string or even the end of her sari is wrapped around the arm, until the new set is worn. In certain communities, widows are not allowed to wear glass bangles.

Here’s a look at what the various colors mean:

Tradition of Bangles in West Bengal

While most married women in India wear gold bangles, married women in the eastern state of Bengal wear a pair of white color shakha (shell) and paula (red coral) bangles as a symbol of marriage.

Tradition of Bangles in Punjab

In the state of Punjab, bride wears a set of ivory bangles called chooda on each hand for 21 days, or for a year after marriage, depending on family tradition.

Tradition of Bangles in Rajasthan

Rajasthani woman wears ivory bangles from her wrist to her upper arm as jewellery of gold for the rest of her life or till her husband is alive. This tradition has become obsolete in present times.

Tradition of Bangles in Contemporary Times

In present times, women, in spite of their marital status adorn their arms with bangles that are available in various types and styles as they believe that wearing of jewellery after marriage or before marriage has no relation to their husband’s age. Hence, these days, bangle or bracelets are worn by fashion conscious girls with as much style as their mothers and grandmothers wore as part of tradition.

Bangles are vital not just during weddings, but also on the occasion of baby shower, which in the Indian context can be referred to as the bangle ceremony. It is believed to be an event held to ward off evil spirits that might be lurking around the mother-to-be or the baby in the womb. The mother-to-be, full of health and radiance, diverts the evil spirits’ attention to her arms full of bangles (glass, silver, conch, or shell bangles, depending on the region and community), thereby deflecting danger to her or the baby. The only time that a married woman removes her bangles is either at labour while having a baby or when she is widowed. While the former is significant of an easy delivery, the latter has tragic connotations. That is why, when glass bangles break, it is thought to portend ill luck. Hyderabad and Firozabad are the favourite haunts for those looking for an amazing variety of strikingly beautiful bangles. If you happen to visit these places, you just might chance upon Kasars there, who specialize in the art of making bangles.

So, when you see beautiful arms with strikingly pretty bangles resting delicately on their wrists, make sure you give them a second look. You might just be inspired to wear some yourself.