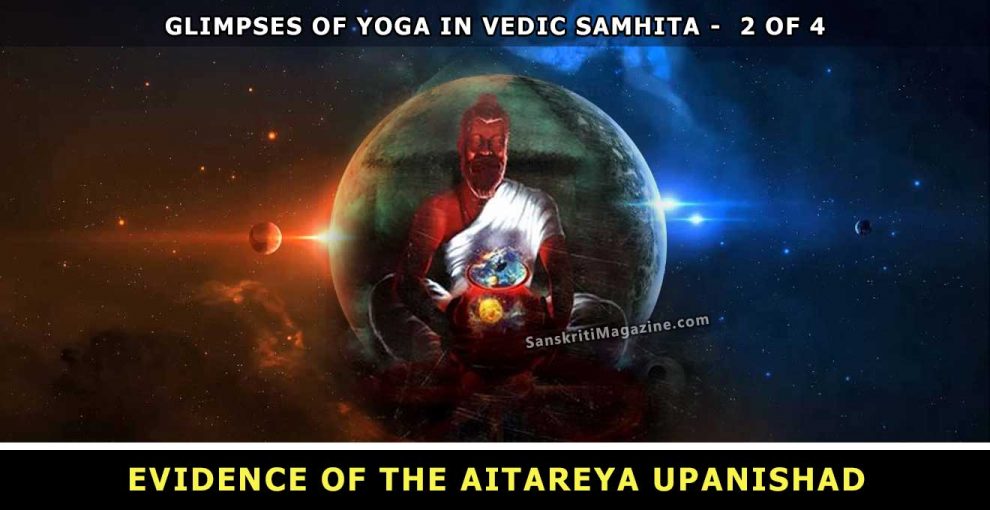 Evidence of the Aitareya Upanishad

The Aitareya Upanishad provides us with a further clue to the understanding of the significance of Indra and the secret sadhana associated with the realization of him. According to it, in the process of formation of the human personality while other gods have entered into it through other openings of lesser importance, the Supreme Being has entered into it, assuming the form of Indra through the sagittal suture at the top of the head (Ait. Up. III.12). from here he moves up to the heart in the body. In the waking state he comes down to the right eye while his wife dwells in the left. He retires to the heart in the state of dreamless sleep along with his wife.

Dwelling in these states and the corresponding locations when he looked towards the external world, he realized it as Brahman and when he directed his attention to his self he found it as Atman. As he saw all this in its essence, he came to be called idam-dra which eventually got settled to the well-known form Indra, so says the Upanishad (Ibid. III.14).

The space inside is the meeting point of Indra and Indrani. They feed themselves on the red lump of blood in the heart. They sue the net of nerves in the heart as their wrapper. The nerve extending from heart up to the highest point in the brain serves as the track of their movement. This nerve is as subtle as the thousandth part of a hair. The net of nerves spread in the heart is connected with this principal nerve. The subtle essence of the food taken by the individual passes through these nerves in a rarified form for the use of Indra (Brihadaranyaka Upanishad, IV.2.3).

The Upanishad further traces the relevance of hita nerves to the dream consciousness. According to it, these nerves are filled with a liquid white, blue, yellow, green and red in colour. Whatever stimuli we receive from the outside world in the waking state, get impressed here on this liquid. It is the circulation of it through the nerves in the state of dream which, according to the Upanishad produces all types of dreams which, as such, are mostly reproductive but may also be creative owing to involvement of the psychic forces in the act of reproduction (Brh. Up. IV.3.20).

The details given here regarding the human anatomy and physiology as visualized by Vedic seers obviously at a higher level of consciousness may be made a matter of serious investigation by experts in the respective sciences. The discovery is sure to bridge the appalling gap still continuing to exist between matter and consciousness.

This much, however, is obvious from the above details that the yogic consciousness of Vedic seers had penetrated so deep into the subtle areas of the human anatomy and physiology as to understand the action and reaction of spirit and matter in the human personality and make use of this understanding in the conversion of the physical energy into consciousness.

Glimpses of Yoga in Vedic Samhita – I of 4
Yoga, the science of restoration of collective consciousness – cidakasha – I of 9
Comment