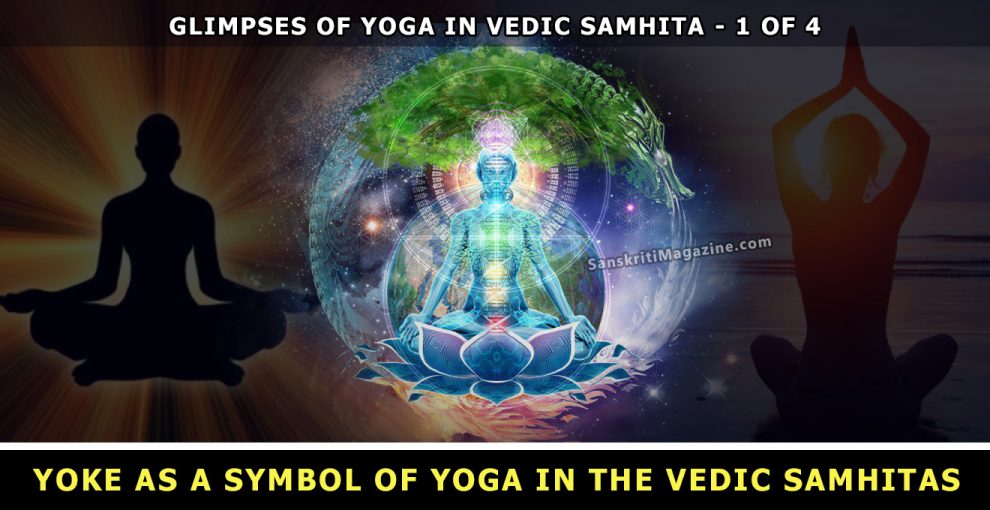 Yoke as a Symbol of Yoga in the Vedic Samhitas

The word Yoga occurs about half a dozen times in the Rig Veda which is associated with the word Kshema, signifying polarity of meaning associated with it. For example, in one of such mantras, seen by seer Atri prays to Indra to provide him with nourishment in the state of Kshema and be around him in the state of yoga (RV.V.37.5).

Similarly, in another mantra, gods, including particularly Varuna, have been prayed by Vashistha to become suspicious to seers in the state of yoga as well as khema (RV.VII.86.8).

The polarity of meaning of these two words is clearer, however, in another mantra addressed to Indra where is is said to rule over the heave and the earth, over water and mountain, over old people and the wise and is worthy of invocation in the state of yoga as well as kshema (RV. X.89.10).

Being derived from the root ksi, to dwell, the word kshema is related to the state of conservation and stasis while being derived from yuj, to yoke, yoga signifies yoking, movement and dynamics.

Accordingly, in its other usages, the word yoga is intimately connected with yoking of horses to the chariot. “When would the powerful donkey get yoked to the chariot, O Ashvins, by means of which you go to the sacrifice?” This is what seer Hiranyastupa inquires about theses deities (RV. I.34.9).

“In a single homogeneous act of yoking, O swift gods, your chariot has taken a round of the seven streams,” observes seer Vashistha regarding the same Ashvins in another mantra (RV VII.67.8). Similarly, in regard to Indra, it is prayed by Atri that having yoked a well trained pair of horses to his chariot, he may do something good when invoked to his side IRV.V.43.5).  In these instances the word yoga, obviously, appears to relate barely to the act of yoking the horse to the chariot. But, what these horses actually are is not easy to understand as it has been warned by a Rigvedic seer himself through the statement, “Who can possibly track the pair of horses belonging to Indra?” (RV. X.114.9). This tracking, in his view, is as difficult a task as understanding the real application of the chandas and the receptacle of wisdom. Such a man, in his view, would really be a wise man, the eighth hero from amongst the Ritviks (RV. 11.8.1)

That the horse as yoked to the chariots of gods and goddesses is not a horse at all but a symbolic of a certain spiritual force or process is evident from one of those four wonderful acts of the Ribhus by means of which they are said to have attained immortality. The relevant act is to lie in deriving a horse out of another horse and yoking both of them to their chariot proceeding to the state of immortality. Correlation of the texts concerned shows that while the original horse is the human mind, the horse derived from it is the divine mind indicated by the term devam manah. It is something supramental. It needs to be brought forth so as to get associated with the ordinary mind for getting elevated from mortality to immortality.

That the act of yoking the horse to the chariot had become symbolic of certain spiritual practices is evident from a number of instances in the Samhita. In one of his mantras, seer Gritsamada asks his followers to offer prayers to the yoga of Agni which is comparable to yoking horses to chariots. The yoga of Agni is an important act involving utmost attention in kindling the fire which in itself is a highly symbolic matter.

The significance of this act has been sought to be brought out through the imagery of yoking the chariot. In another mantra seen by seer Bharadvaja, there is still clearer case of chariot and its driving signifying something psychological. Here, it has been stated that a good charioteer while sitting on a chariot drives the horses onwards where he wishes. In his case, the reins control the horses exactly as per the promptings of his mind (RV V.75.6). thus, what the seer visualizes in this mantra is the importance of the mind of the charioteer inasmuch as it is through the bidding of the reins that it controls the horses which while working under its control take the chariot wherever it desires them to take.

Deriving inspiration from this or some such mantras, the sage of the Katha Upanishad works out the whole symbolism of chariot in which Atman is the owner of the chariot, body is the chariot, intellect is the charioteer, manas is the reins, senses form the path while the highest abode of Vishnu is the final destination vishnoh paramam padam (Katha Up. III.3-9). By means of this symbolism the message which is conveyed here is that if one wants to reach one’s real destination, one has to merge one’s senses in one’s manas, the latter in one’s knowledge-self, the latter in the great self and the last in the Self remaining always in peace (Ibid. III.13). it is in this strain that the Shiva-Sankalpa hymn of the Yajurveda, while wishing to make the mind perfectly auspicious in its determinations and describing it as unaging and fastest and lying in the heart, compare its working to that of a good charioteer driving the horse on the right track by exercising control over them through the reins (YV. XXXIV.6).

This widespread use of the word yoga in connection with the yoking of chariot in the Veda along with all its nuances of meaning, inclining particularly to mind and it control is sufficient to suggest that the accounts of yoking of the chariot and fighting, etc., here are not so much physical in their import as they are spiritual, relating particularly to the tedious course of sadhana involved in the practice of yoga, no matter of whatever variety but involving basically the idea of tending to and realizing the potentialities of the Self in all its ramifications. This viewpoint gets positive support from Yaska’s analysis of the Vedic scenario in words as follows:

“Owing to the all-comprehending nature of the Divine, different gods are just one and the same Atman extolled variously representing its different aspects from different point of their innate natural associations and thus are recounted as giving birth to one another, inhering in the nature of one another, getting born of their actions and of their own selves and having their self itself serve as their chariot, as their horse and as their weapon (Yaska’s Nirukta VII.4).”

Besides the substantive yoga having been derived from the root yuj, its verbal form yunjate has also been used in the Samhita and that, too, in connection with an obviously yogic act. This has been done by Syavasva Atreya in the context of devotion to god Savitr, the cosmic stimulator. The seer recounts in the mantra concerned how seers united their mind and intellect with the great source of enlightenment and wisdom, namely, Savitr (RV.V.81.1). The Yogic potentiality of this mantra is duly recognized by the Shvetasvatara Upanishad which makes it a central piece in its account of yogic sadhana and experience in a whole section of its texts (Shevt. Up. II.1-17).

Yoga, the science of restoration of collective consciousness – cidakasha – 2 of 9
Glimpses of Yoga in Vedic Samhita – 2 of 4
Comment