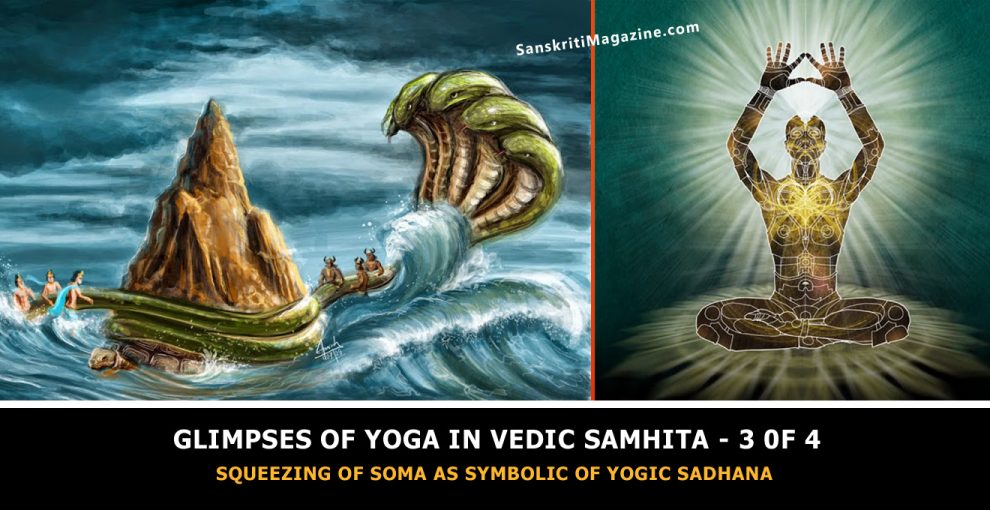 Squeezing of Soma as symbolic of Yogic sadhana

In the Vedic sadhana, all sorts of crude experiences received through the organs of sense and action get deposited through sensory and motor nerves in the central anatomical system extending from brain to heart and become subtler and subtler until they are made worthy of being taken up by Indra lying in the heart. This is perhaps the secret of the pressing of Soma, making its juice pass through three sieves and offering it to Indra as is recounted so graphically in the Samhitas. That Soma was not merely a creeper’s juice is clarified by the Rigveda itself when it observes that though the ordinary drinker takes as Soma what he takes out by pressing the creeper, the real Soman known to knowers of Brahman cannot be tasted by anyone other than the knower of Brahman, the Supreme Being (RV. X.85.3).

There is yet another mantra seen by Vishvamitra in which this process of purification of the psychic offering is recounted in a relatively clearer way. In this mantra, it is stated how a certain most venerable seer Sayana takes as the teacher of Vishvamitra, purified the offering by making it pass through three sieves and understanding at the same time through his heart the secret of the Light of consciousness by means of his self-offerings he made manifest the most effulgent gem and then saw the earth and the heaven spreading around him (Ibid. III.26.8).

It is also interesting to note that understandably as a result of this sadhana the seer concerned gets transformed into such a prodigy as to be sketched out by Vishvamitra in the immediately following mantras as a reservoir flowing out in the hundreds of channels and yet remaining inexhaustible as possessed of all-seeing power as author of all whatever is worth speaking of as source of real knowledge, as speaker of of only truth and as lying blissfully in the midst of the heaven and the earth like a child lying in the lap of its parents (Ibid. III.26.9).

It is this exploration in the heart through meditation which comes to be called dahara vidya in the Chandogya Upanishad. As the Upanishad puts it, a teacher asks his pupil to see what lies in the small space in the heart. Being inquired by the student as to the use of such a meditation, the teacher tells him that the space inside the heart is as vast as the total space outside and has accommodated in it all whatever is there in the outside space as also what is not there in it (Ch. Up. VIII.1.3). This Upanishad also finally in this context talks of hundred and one nerves shooting out of the heart out of which one hundred nerves spread in the rest of the body while the remaining one goes up to the top of the head and serves as the channel to immortality if, of course, the soul is made to pass through it at the time of death (Ibid. VIII.6.6).

All such references cumulatively bear out the point of close coordination of the psychic with the physical even in deeper states of self-realisation. At the sensory level, we can have only a particular kind of sensation from the contact of the sense organ concerned with its specific object. We can only see with the eye and hear with the ear. This is, obviously, due to specific systems involved in the act of sensing beginning from the tip of the sense-mechanism to the centre of the brain.

The Vedic seers, however, have discovered involvement of lower portions of the body up to the heart in the act of cognition and understanding. This is why they talk of hrida manisha rather than only manisha as instrumental in higher experience. This, as their accounts show, brings a qualitative change to the nature as well as range of knowledge. It need not be stated that our sensory perception is extremely selective and therefore partial.

Conceptualization on the basis of that inadequate datum is necessarily to produce an understanding of the object concerned still farther away from the actuality. Use of the same mechanism in the understanding of the supra-sensual is sure to prove still less adequate since the sensory base is also missing in that case. Moreover, since the senses work on behalf of the exterior of the brain, they cannot awaken the interior of it which has little correspondence with them. If the interior of the brain has any possibility of being fed duly with sensibility that is only through the heart which, is so internally correspondence with the whole of the brain.

This is what the Upanishadic sage most probably means when he says that Indra feeds himself on the lump of blood inside the heart. Being the greatest centre of sensory nerves next to only to brain as well as of supra-sensory sensibility heart needs to be utilized to the maximum extent in getting to the core of the brain and in understanding the corresponding core of the reality apart from its abstraction available to the senses, sense-mind and intellect.