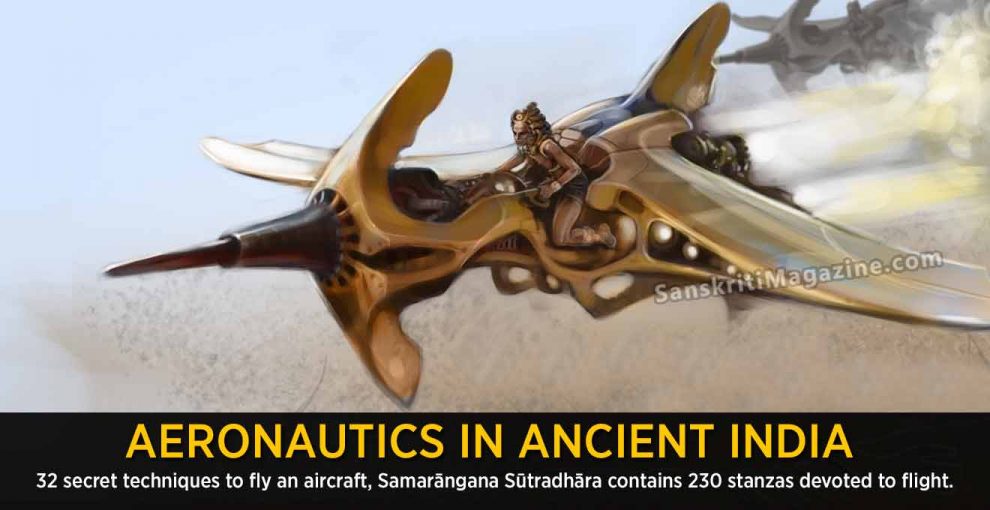 There is mention of the usage of aircraft in the Indian epics, Rāmayāna and Mahābhārata. As mentioned in the Rāmāyana, Ravana used puspakavimāna, which had been captured from Kuvera. However, Rama took charge of this aircraft after killing Ravana and used it to reach Ayodhya along with Lakshmana, Sītā and others. Gavopākhyāna in Mahābhārata, also talks of using aircraft. 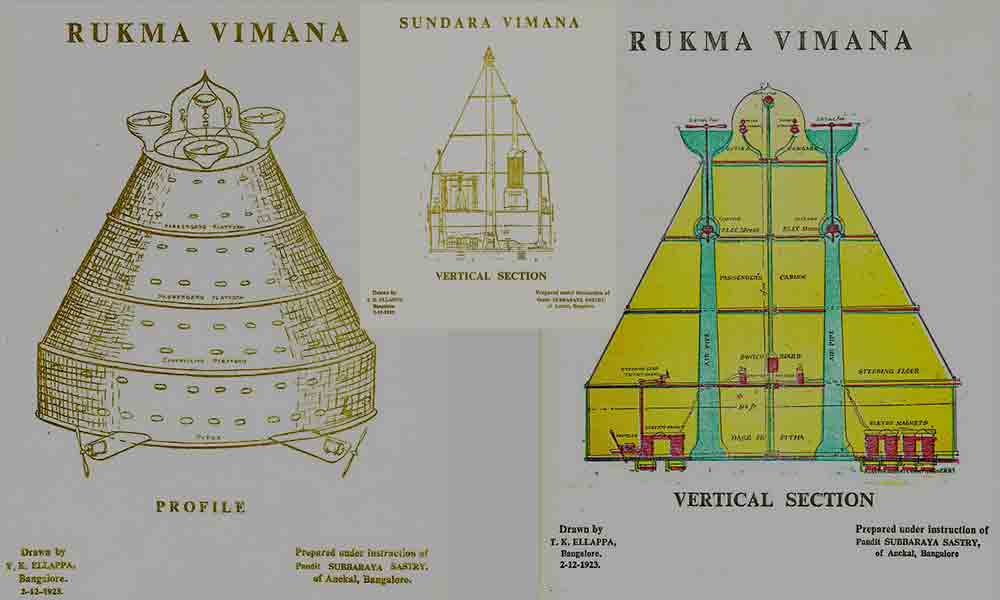 Western scientists estimate the antiquity of this aeronautical science in India to be around 5000 years. Indian scientists and critics have a different opinion about judging the number of years. They say that aircraft was used extensively during Rāmāyana and Mahābhārata period indicating that aeronautics was a much developed branch of science by that time. It also points to the fact that aircraft was developed much before this period.

Aeronautics or Vaimānikaśastra is a part of Yantrasarvasva of Bharadvāja. This is also known as Brhadvimanasāstra. Vaimānikaśastra deals with aeronautics, including the design of aircraft, the way they can be used for transportation and other applications, in detail. The knowledge of aeronautics is described in Sanskrit in 100 sections, eight chapters, 500 principles and 3000 shlokas. Great sage Bharadvāja explained the construction of aircraft and way to fly it in air, on land, on water and use the same aircraft like a submarine. He also described the construction of war planes or fighter aircraft. 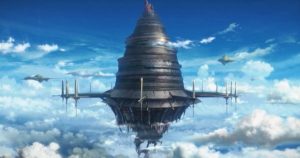 The first principle of Vaimānikaśastra defines an aircraft, ‘vegasamyat vimana aņdajānāma’, which means vimāna is the one which can fly in air like a bird. Subsequent principles explain the requirements for being a vimanādhikari or pilot.

According to Bharadvāja, there are 32 secret techniques to fly an aircraft.

The aircraft is classified into three types – mantrikā, tantrikā and krtakā, to suit different yugas or eras. 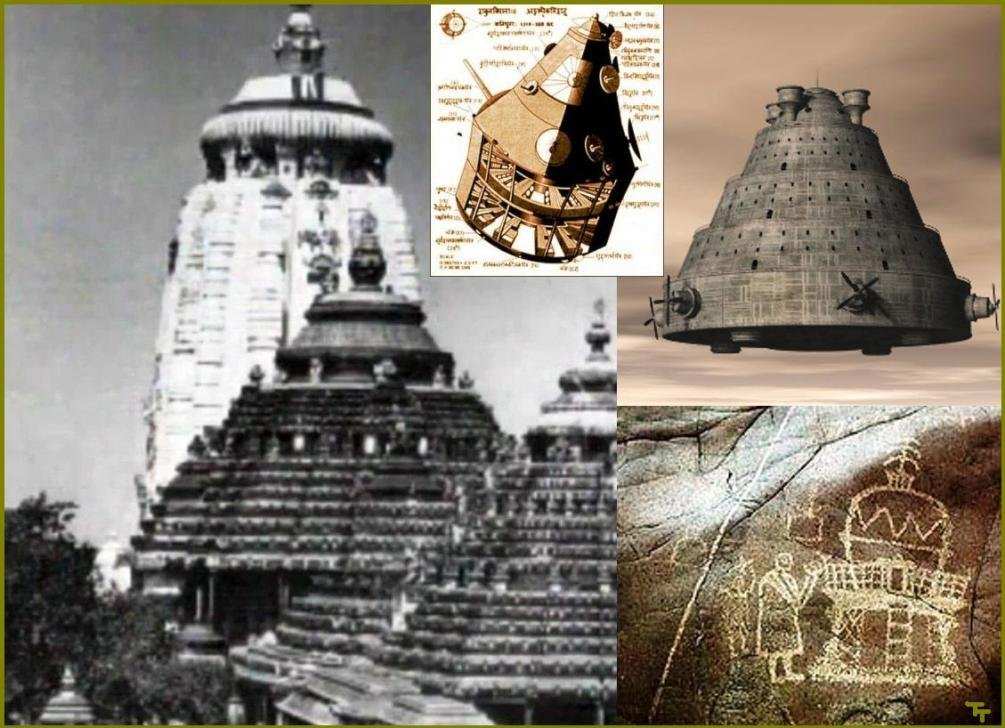 In Krtayuga, it is said, dharma was well established. The people of that time had the divinity to reach any place using their astasiddhis.

The aircrafts used in Tretāyuga are called mantrikāvimāna, flown by the power of hymns (mantras). Twenty-five varieties of aircraft including puspakavimāna belong to this era. The aircraft used in Dvāparayuga were called tantrikavimana, flown by the power of tantras. Fifty six varieties of aircraft including śakuna, sundara and rukmavimāna belong to this era. According to Bharadvāja, a gānyekatrimśat, which means there were thirty one instruments to fly an aircraft, including viśvakriyādarpana, to see the surroundings from the aircraft and śāktyākarsanadarpana, to absorb solar energy. Manufacturing of different types of instruments and putting them together to form an aircraft is also described.

In vastrādhikarana, the chapter describing the dress and other wears required while flying, talks in detail about the wear for both the pilot and the passenger separately.

Āhārādhikarana is yet another section exclusively dealing with the food habits of a pilot. This has a variety of guidelines for pilots to keep their health through strict diet. The Samarāngana Sūtradhāra is an encyclopedic work on classical Indian architecture written by Paramara King Bhoja of Dhārā (1018–1060 AD). In 83 chapters, subjects treated are town planning, house architecture, temple architecture and sculptural arts together with mudrās, the canons of painting, and a chapter on the mechanical contrivances, the yantras. This chapter on yantras deals with gathana, the art of mechanical constructions, delineating upon the definition of yantra, its elements; qualities and manifold varieties of pleasure machines, toy-machines, the machines of warfare as well as the domestic machines, like dvārapālayantra, the soldier machine, etc. 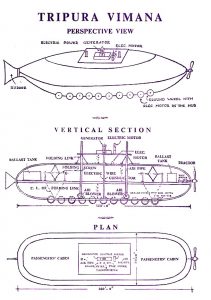 Samarāngana Sūtradhāra contains 230 stanzas that are devoted to flight. It describes in detail, every possible aspect of flying. The vimānayantra like vyomacāriviha gamayantra, wooden brief machine travelling in the sky and ākāśavāni-dārumayavimāna-yantra, wooden aero plane flying in the air together with varieties of vāriyantra, dharayantra and the rathadolāyantra, the swinging machines are described in the text.

Some of the ideas which have been translated are given below:

“The body must be strong and durable and built of a light wood (laghu-dāru), shaped like a bird in flight with wings outstretched (mahāvihanga). Within it must be placed the mercury engine, with its heating apparatus made of iron underneath.” 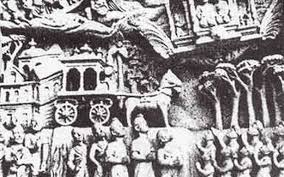 “In the larger craft (dāru-vimana), because it is built heavier (alaghu), four strong containers of mercury must be built in the interior. When these are heated by controlled fire from the iron containers, the vimāna develops thunder power through the mercury. The iron engine must have properly welded joints to be filled with mercury and when the fire conducted to the upper parts, it develops power with the roar of a lion. By means of the energy latent in mercury, the driving whirlwind is set in motion, and the traveler sitting inside the vimāna may travel in the air, to such a height as to look like a pearl in the sky.” 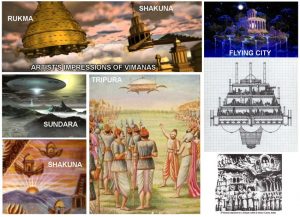 Bharadvāja’s Vaimānikaśāstra is not as popular as Vāstu or Āyurveda due to various reasons. Vaimānikaśastra was never considered to be of much use in day to day life and experimenting with the concepts was difficult due to the technicality and scientific nature. It was also considered that the Vaimānikaśastra would be misused if it were put to common man’s knowledge. Historians also quote yet another interesting reason for keeping the Vaimānikaśastra out of reach for all and sundry. Fear for the theft of the shastra during invasions was one such deterrent against the wide circulation of the text, which in return might have hampered further study or experiment.

Among many significant contributions of ancient Indian scientists, Vaimānikaśastra is notably a towering work dealing with vimanas and allied topics. As a subject, aviation has its own charm over other disciplines, even in these days. It is the firm view of many scholars that mere knowledge of Sanskrit or science or both plays little role in true understanding of such a work. The authors were intelligent to use coded terms, symbolic expressions, and archaic language to safeguard knowledge against falling into unauthorized hands. For right understanding, true flair in Sanskrit and science along with an expertise to decode and interpret with reference to context are the key.