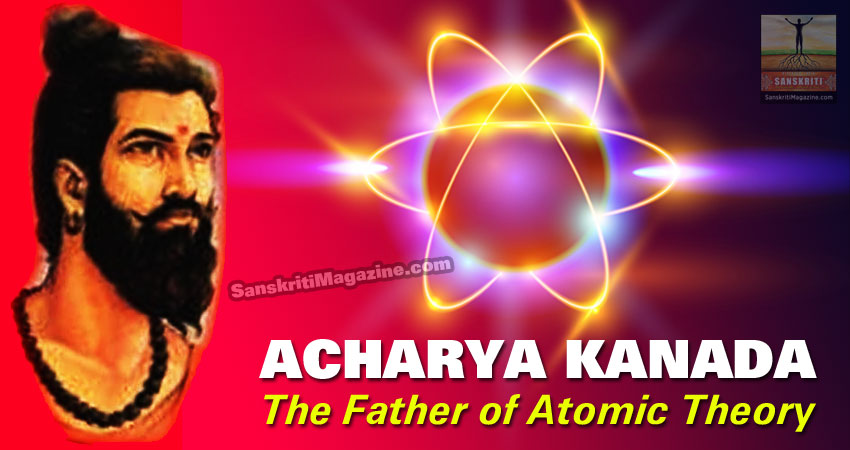 Modern science credits the atomic theory to an English chemist and physicist named John Dalton (1766-1844).  However, not many people are aware that a theory of atoms was formulated approximately 2500 years before Dalton by an Indian sage and philosopher named Acharya Kanada.

Acharya Kanada, originally known by the name of Kashyap, is believed to have been born either around 600 BC or 800 BC in Prabhas Kshetra near Dwaraka in present day Gujarat, India.   He was the son of a philosopher named Ulka.

Kashyap displayed a keen sense of detail since childhood and minute things attracted his attention.  As a young boy, he once accompanied his father on a pilgrimage to Prayaga.  He noticed that thousands of pilgrims in the town were littering its roads with flowers and grains of rice which they offered at the temples by the shore of river Ganges.

Fascinated by the tiny particles, Kashyap began collecting the grains of rice from the ground while everyone else was busy offering prayers or bathing in the Ganges.  Noticing this behaviour from a boy of a well-to-do family, an inquisitive crowd gathered around him and started wondering why he was acting in such a strange manner.

When questioned about why he was collecting grains of rice that even a beggar wouldn’t touch, Kashyap replied that one grain in itself may seem worthless but a collection of some hundred grains make up a person’s meal.  The collection of many meals would feed an entire family and ultimately the entire mankind was made up of many families.  And for this reason alone, a single grain of rice was as important as all the riches in the world.  People started calling him Kanada after this incidence as ‘kan’ translates to the smallest particle in Sanskrit.

It was Kanada who first realized the idea that “anu” (atom) was an indestructible particle of matter.

This theory occurred to him while he was walking with food in his hand.  As he nibbled at the food in his hand, throwing away the small particles one by one until he was unable to break it down anymore and it left a smell on his hands.  He realized that he could not divide the food into further parts and the realization of a matter which cannot be divided further came into existence.

He called this indivisible matter, “anu” which literally means atom. He founded the Vaisheshika School of philosophy where he taught his ideas and the nature of the universe.  He authored the text “Vaisesika Sutras” or Aphorisms, pioneering the atomic theory, describing dimension, motion and chemical reactions of atoms.

Acharya Kanada considered the atom minute objects invisible to the naked eye which come into being and vanished in an instant; they were indestructible and hence eternal.

Adherents of this philosophy further held that atoms of same substance combined with each other to produce dvyanuka (bi-atomic molecules) and tryanuka (tri-atomic molecules). This devinuka has the properties similar to those of the two original paramanu. Kanada also put forward the idea that atoms could be combined in various ways to produce chemical changes in presence of other factors such as heat. He gave blackening of earthen pot and ripening of fruit as examples of this phenomenon.

His primary area of study was Rasavādam, considered to be a type of alchemy. He is said to have believed that all living beings are composed of five elements: water, fire, earth, air, ether. Vegetables have only water, insects have water and fire, birds have water, fire, earth and air, and Humans, the top of the creation, have ether—the sense of discrimination (time, space, mind) are one. He theorized that Gurutva (Hindi/Sanskrit for Gravity) was responsible for the falling of objects on the Earth.

Accordingly, the universe is the interplay of seven aspects or states of material things, namely:

This Indian conception of the atom was developed independently and possibly prior (depending on which dates one accepts for the life of Kanada) to the development of the idea in the Greco-Roman world. Indian theories about the atom are abstract and enmeshed in philosophy as they were based on logic and not on personal experience or experimentation.

Thus the Indian theories lacked an empirical base, but in the words of A.L. Basham, the veteran Australian Indologist “they were brilliant imaginative explanations of the physical structure of the world, and in a large measure, agreed with the discoveries of modern physics.”

According to author Dilip M. Salwi, “if Kanada’s sutras are analysed, one would find that his atomic theory was far more advanced than those forwarded later by the Greek philosophers, Leucippus and Democritus.”

Maharishi Kapila: The Perfect Being
Indian Chemist discovers the secrets of Agastya Samhita in 1927!
Comment