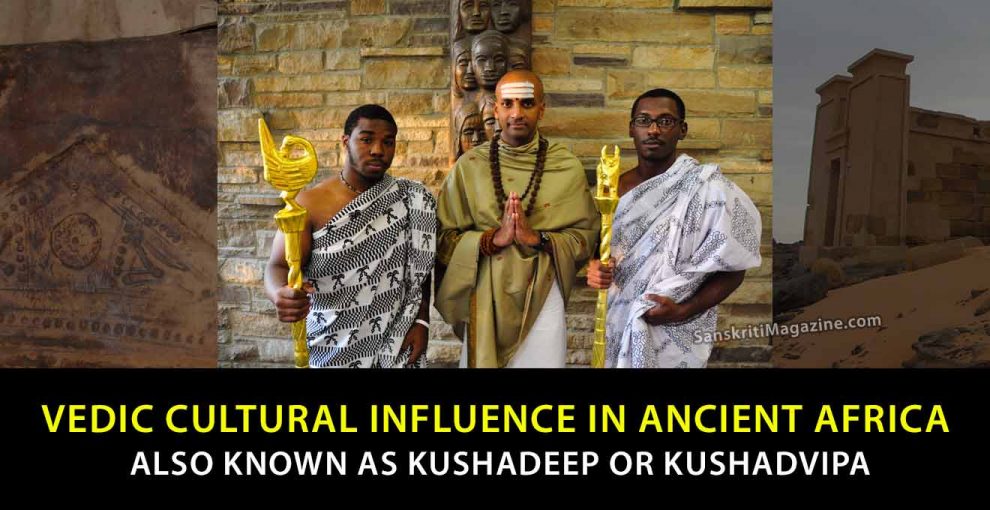 In ancient Vedic lore, Africa was known as KushaDeep, or Kushadvipa. Two reasons for this is because large stretches of land were covered by the tall grass known as kusha grass in Sanskrit, and after the war between Rama and Ravana, the continent was under the administration of Rama’s son Kush, or Cusha. African school text books also describe Africans as Cushites, testifying to the above information.

Swami Krishnanand once visited the Abyssinian monarch Haile Selassie and presented a copy of the Ramayana. He thought the Christian rulers were not likely to have heard of the book, but was pleasantly surprised to hear the monarch’s remark, “This is nothing new to us. We Africans are Cushites.” This is what motivated Krishnanand to search the African school text books and find references of Africans designated as Cushites. The text books provided more evidence of Africa’s ancient administration of Cusha. However, the text books wrongly mention Cusha’s father as Ham instead of Rama. As previously explained, that is because Rama was spelled in western regions as Rham. In course of time the “R” was dropped and what was left was “Ham.”

Other strong Ramayanic links with Africa can be recognized in the island of Mauritius off the eastern coast of southern Africa. The island gets its name from “Marichas,” meaning the island of Marichi, who was one of the generals in the army of the demon Ravana, and also a name for the sun. Rama, however, routed all the demons out of the area during the war with Ravana, and made Marichi flee to the stronghold of the demons. 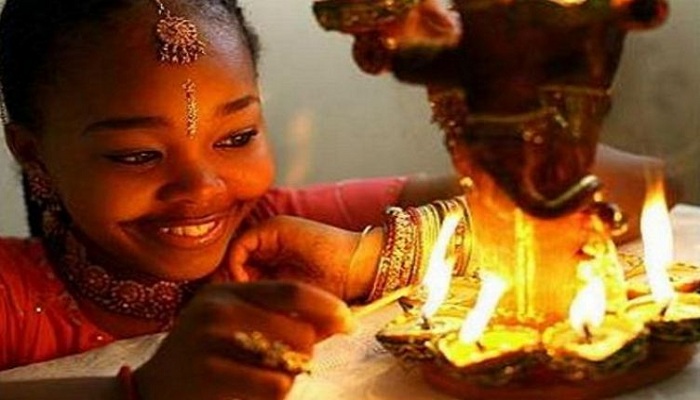 In a book by Drusilla Dunjee Houston, titled The Wonderful Ethiopians of the Ancient Kushite Empire (in three volumes), she indicates that the ancient name for the landmass of Africa was Kushadvipa. This is also a name mentioned in the Bhagavata Purana, and in the Ramayana, which records the activities and pastimes of Lord Ramachandra. Some people feel He appeared at least one million to two-and-a-half million years ago. Lord Rama had two sons, Lava and Kush (or Cush). Each son was given half of the earth planet to rule after the great war between Rama and the demon Ravana. Africa was an area that was under the rule of Lord Rama’s son, Kush, for which it became known as Kushadvipa. For this reason the African people were also known as Kushites, also spelled as Cushites. Thus, Kush is the ancient Vedic name known for Africa. So, the Vedic connection with Africa goes back no less than to the Ramayanic times.

Another reference in this regard is found in the Bible in the book of Numbers, Chapter 12, verse one, in which it is said, “And Miriam and Aaron spoke against Moses on account of the Cushite wife he had taken, for he had taken a Cushite wife.” This means that Cush and Cushites were a distinct and recognized culture and people that existed from before the time of Moses. It also shows that Moses had taken a woman from this country as a wife. Most biblical scholars associate Cush with the area of Ethiopia. In the above verse, Miriam and Aaron spoke against Moses for having taken the woman as a wife because she was ethnically different from them.

Africa in ancient times was also known as Shankadvipa. The word dvipa is Sanskrit for island, and Shanka is Sanskrit for conch. This was because Africa was like a large island in the shape similar to a conch shell. The English word conch is a derivative of the Sanskrit shank. This also shows how the Vedic rulers were so familiar with Africa that they knew its shape as seen from miles above it.

The African Swahili language and other local dialects bare the remnants of its original Sanskrit. For instance, the Swahili word “simba” for lion is the Sanskrit word simha. 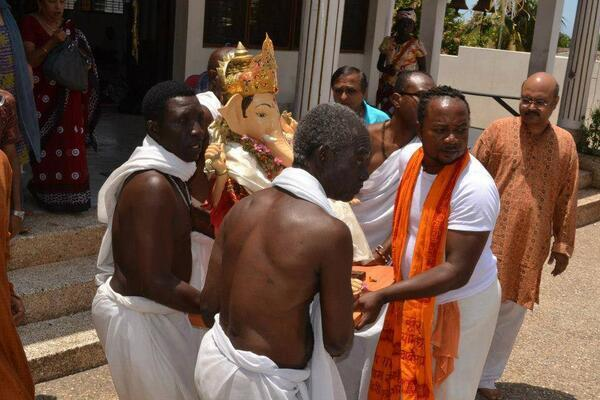 The name of the country Abyssinia gets its name from the corruption of two Sanskrit words; App-Sindhu, meaning the waters of the Sindhu River, the modern Indus. This signifies
that this area was once a settlement of people who had come from the Indus region.

Elsewhere in Africa we find that Somalia is connected with Soma, and whose people worshiped the moon. Tanganyka (from the Sanskrit term Tung Nayak, meaning “the great leader”) and Zanzibar (similar to the Sanskrit name Kanchipur) have merged to become Tanzania. The port city Dar-es-Salaam is the Sanskrit term Dwar-eeshalayam, which means the “Gateway to the Temple of God.” This also shows how the Vedic culture was in or at least influenced Africa.

E. Pococke, in his book India in Greece (page 205), mentions that Philostratus concluded that the Ethiopians were originally an Indian race. They were compelled to leave India for the sin of killing a certain monarch to whom they owed allegiance. Pococke goes on to say that another Egyptian remarked that he had heard from his father that Indians were the wisest of men and that the Ethiopians, a colony of the Indians, preserved the wisdom and usages of their fathers, and acknowledged that this was their origin. He also found the same conclusion had been made at a later period by Julius Africanus, from whom it had been preserved by Eusebius and Syncallus. Thus, Eusebius had also stated that the Ethiopians migrated from the Indus region and settled in the vicinity of Egypt. 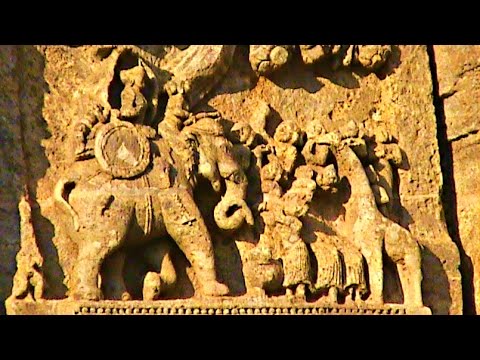 When we analyze the religions of Africa today, we can still recognize that the basic concepts regarding God and life on earth in the traditional African religions are in line with the essential principles of Vedic culture. Such things as the methods of divination and the rites of passage are similar to that found in Vedic traditions. Also, contact with the Divinity was a major factor in life in the Kushite culture. Most all traditional African religions accept a Supreme Being, but His function differs according to region. They also accept lesser gods, respect the ancestors, and practice magical rituals.

The Mbuti Pygmies believe in a supreme Creator in the form of an old man as lord of the sky. They also have reverence for the moon. There is also a benevolent god of the forest to whom many pray and who exists in the trees. They also have ritual dancing and feasting at festivals for religious purposes, and at the puberty rites for the boys and girls. The Bushmen in Southern Africa believe in celestial spirits and have legends that explain their characteristics. The personifications of natural forces are also accepted, and these forces are invoked when the need arises, as in the case of rain. 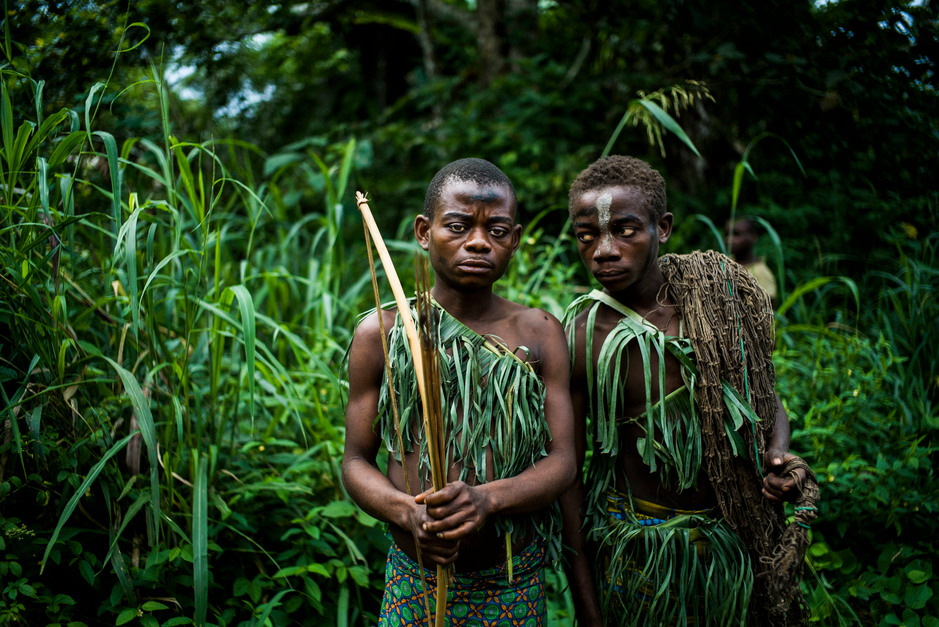 From Kalahari and the Congo to Tanzania there is the belief in an omni-present supreme Creator who punishes and rewards people according to their works. But there are few organized religious societies and no big temples to regularly offer formal worship to the Supreme. However, the general belief is that anyone can pray to God in time of need, and He oversees all the functions of nature and the earth. Belief in life after death is found everywhere. Part of the funeral ceremony often contains rites to make sure the dead will remain at peace and not become a restless ghost, all of which is common Vedic knowledge.

The ancient African religions have now faded as Islam (130 million followers) and Christianity (160 million followers and six thousand sects) continue to spread, but many of the old rituals and beliefs have simply merged with these new religions.

This concludes our presentation of much, but not all, testimony on the Vedic influence in the Middle East and further into Africa. No matter whether every scholar agrees completely with all of this information, it nonetheless provides much evidence for considering the numerous links of the religion and civilization in the Middle Eastern regions to that of the ancient Vedic and Indian society. The Middle East was a part of the original Vedic empire that pervaded the area, and still remains greatly influenced by that Vedic tradition today.

A Foreigner’s account of Chidambaram Temple Festival in 1924, London
History of Vedic Culture in the Middle East
Comment