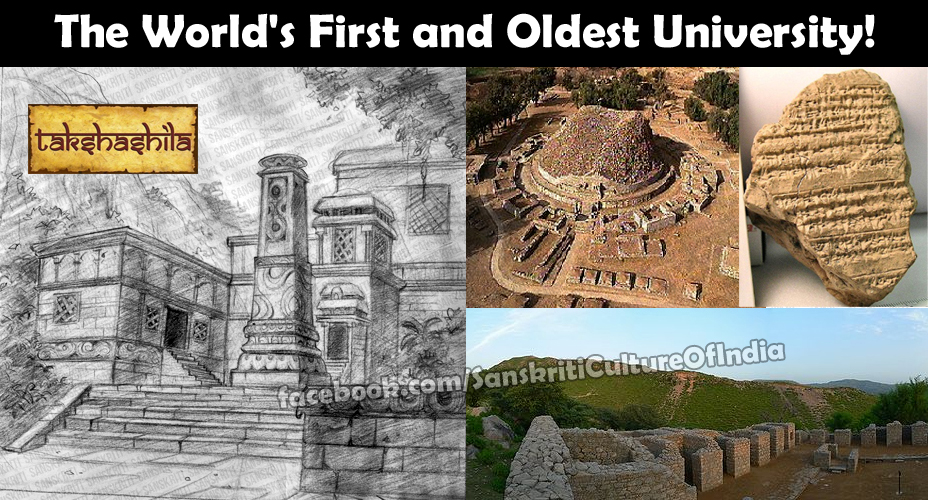 India has a long and venerable history in the field of higher education. In ancient times, the country was known to have been home to the oldest formal universities in the world.

The world’s first University was established in Takshila or Taxila or Takshashila (now in Pakistan) in 700BC. This centre of learning was situated about 50 km west of Rawalpindi in Pakistan. It was an important Vedic/Hindu and Buddhist center of learning but wasn’t as well organized as the University of Nalanda.

The Vayu Purana traces the start of Takshila to Taksha, son of Bharata and is also mentioned in Mahabharata, citing Dhaumya as one of the Acharyas. There are several mentions of this University in the Buddhist Jataka Tales. Chinese travellers like Fa Hian (Faxain) and Huien Tsang (XuanZang) also speak of Takshila in their writings.

More than 10,500 students from all over the world studied here. The campus accommodated students who came from as far as Babylonia, Greece, Arabia and China and offered over sixty different courses in various field such as science, mathematics, medicine, politics, warfare , astrology, astronomy, music, religion, and philosophy. Generally, a student entered Takshashila at the age of sixteen. Students would come to Takshila and take up education in their chosen subject with their teacher directly. Entrance exam to Takshila was very difficult and only 3 out of every 10 students passed the admission test.

They were supposed to pay for their expenses. However, if a student was unable to pay then he could work for his teacher. The Vedas and the Eighteen Arts, which included skills such as archery, hunting, and elephant lore, were taught, in addition to its law school, medical school, and school of military science.

Takshila was specialized in the study of medicine.

Panini, the famous Sanskrit grammarian, Kautilya (Chanakya) and Charaka, the famous physician of ancient India, and Chandragupta Maurya were the products of this university. It gained its importance again during the reign of Kanishka. It was probably, the earliest of the ancient seats of higher education. Takshashila is perhaps best known because of its association with Chanakya. The famous treatise Arthashastra (Sanskrit for The knowledge of Economics) by Chanakya, is said to have been composed in Takshashila itself.

During the 800 years that Takshila was operational, it attained great fame. The University consisted of:
– 300 lecture halls with stones benches for sitting
– laboratories
– Observatory called the Ambudharaavlehi for astronomical research
– Massive Library called Dharma Gunj or Mountain of Knowledge,
consisting of 3 buildings: Ratna Sagar, Ratnodavi and Ratnayanjak

Takshila`s prosperity resulted from its position at the junction of three great trade routes. In the second half of the 5th century, it was severely damaged by Hephthalite invasions; during the 7th century it was gradually abandoned by its inhabitants. Excavations begun in 1913 finally gave the world a peak into the best minds in Indian history.

Takshila was listed by the UNESCO as one of the World Heritage Sites in 1980.

Namasté – It means more than just a “HI”
A RARE photograph taken in 1921 in Amritsar, India
Comment