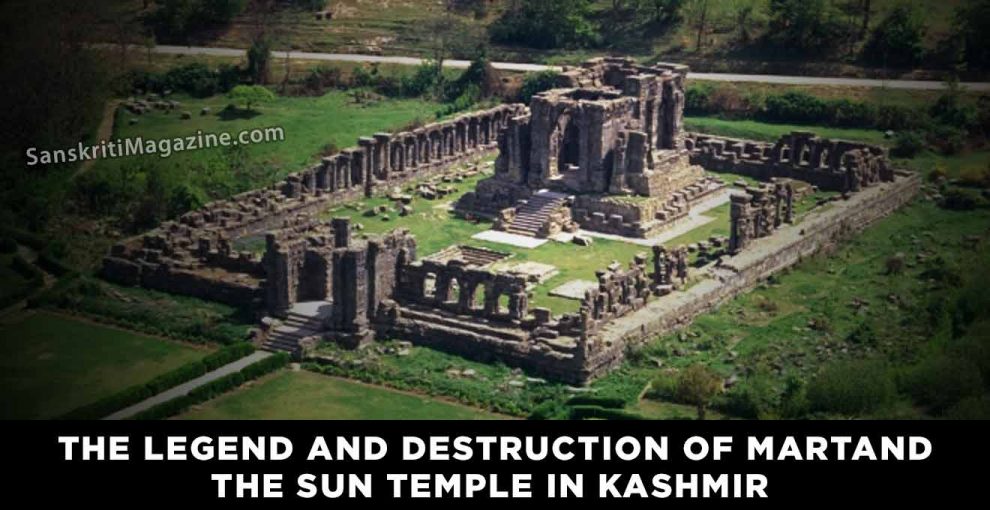 History makes us believe that it had been Raja Ramdev of Pandva dynasty first who built the original Martand temple in 3007 BC. devoted to Sun God. Many subsequent kings and monarchs repaired and renovated the temple complex. However, it goes to Maharaja Lalitaditya (8th century AD) who gave a complete face lift to the ancient temple and made it known all over the world.

S.N. Dhar in his book “Kashmir: Eden of the East” published in 1945 mentions about King Ram Dev. In 2180 Raja Daya Karan was the first monarch. In 3007 B. C. Raja Ramdev built the temple at Mattan. Raja Pravarsen founded the city of Srinagar, calling it Pravarpura.

The Sun temple of #Martand stands in the middle of a large courtyard having 86 fluted columns. The temple proper contains garbhagraha, antarala and closed mandapa, approached by a grand flight of steps. The pliant supporting the central shrine has two tiers, both with niches having 37 divine figures. According to Walter R. Lawrence, the noted historian and a Kashmir expert of his times, “The ruins of the Hindu temple of Martand, or as is commonly called, the Pandav-Koru House – the Cyclopes of the east are undoubtedly, occupying the finest position in Kashmir. This noble ruin is the most striking in size and situation of all the existing remains of Kashmir grandeur”. He further writes. “There are in all eighty-four columns- a singularly appropriate number in a temple of the sun. The number eighty four is accounted sacred by the Hindus in consequence of its being the multiple of the number of the number of days in the week with the number of signs in the Zodiac (Rashis)”.

Cunningham, another historian, thinks that the erection of this Sun temple was suggested by the magnificent Sunny prospect which its position commands. “It overlooks the finest view in Kashmir and perhaps in the world. Beneath it lays the paradise of the east, with its sacred streams, orchards and green fields, surrounded by vast snowy mountains, seem to smile upon the beautiful valley below. The history of Martand or Mattan is incomplete without any mention of Bumzua, a sleepy hamlet at a distance of one Kilometer and situated at the mouth of the Lidder, more known for the cave temple, dedicated to the Kaldeva that stands at the far end of a natural, but artificially enlarged fissure in the limestone cliff. The entrance to the caverns is 60 ft above the river Lidder and is carved into an architectural doorway. The huge Shiva Linga inside the cave is yet another cave, some hundred feet long and is said to have been a Samadhi of some ancient sage.”

Pandit Kalhana has described the early history of Kashmir as “river of kings in which royalty followed royalty”. Pandit #Kalhana believed the real history of Kashmir in Kalyug begins probably 5000 year BC. For about 633 years Dayakaran and his 55 sucessors (roughly speaking) are said to have ruled Kashmir. Somdatta was probably last of the line. King #Ramdev of Pandva dynasty is said to have built the temple at Mattan in about 3007 BC. King Ramdev was a great king whose kingdom extended as far as Bay of Bengal.

The earliest history of Kashmir (also called #Rishibhumi) is wrapped in mystery. The pre-history says #Neel, the son of Rishi Kashyapa was first ruler of beautiful kingdom of Kashmir when #Vitasta (Jhelum) was the main river and a huge lake named #Satisara existed. The main written source is #Rajtarangani, a well known book written by famous historian, Pandit Kalhana. He started the book and other historians, who followed him, added the same script giving factual details of their respective periods. From here it is learnt that the history of Kashmir practically ran alongside the period of Mahabharata.

More pre-historical details about Kashmir can found in #Nilamata, written by Sage Nila. But as a matter of fact the Nilamata gives besides, the account of sacred places, a lot of information about the Kasmiri way of living. The picture of ancient ‘Kasmira’ presented y its study is not complete and compact, still it is significant for its value which is us supplementary to that of the Rajatarangini. While the Rajatarangini acquaints us with kings, queens and ministers of ‘Kasmira’, the Nilamata generally speaks of common men in their homes, streets, gardens and temples. The life of the common people, the food and drinks they took, the amusements they resorted to, the currents of religious thoughts they followed nd the rites and ceremonies they performed throughout the year are described therein. If the Rajatarangini is important from the point of view of the political history of ‘Kasmira’, the Nilamata is no less important for the cultural history of that part of the country.

One of the oldest temple ruins, it is now called “Shaitan ki Gufa” (Devil’s cave) by Kashmiri Muslims. It was featured in the Bollywood movie, ‘Haider’. It was part of the Karkot Empire (A Naga Kingdom) which was in continuous strife with Gandhara’s Suparna (A Garuda Kingdom). Hence, even today, an eagle is taken for a sign of devil in Kashmiri folklore.

Perhaps a scintillating piece of architecture, this temple could have awed everyone who saw it. It was made by King Lalitaditya in around 5th Century A.D. and it was destructed by Muslim ruler Sikander Butshikan. It is believed that it was so strongly built that it took many days for its destruction. The temple now lies in ruins near the district of Anantnag.

According to Soon Adab, it took Sikandar Butshikan quite sometime to demolish it. Martand consists of a courtyard with the principal shrine in the middle and a colonnaded peristyle. The grandeur of the temple can be judged from the facts, as under