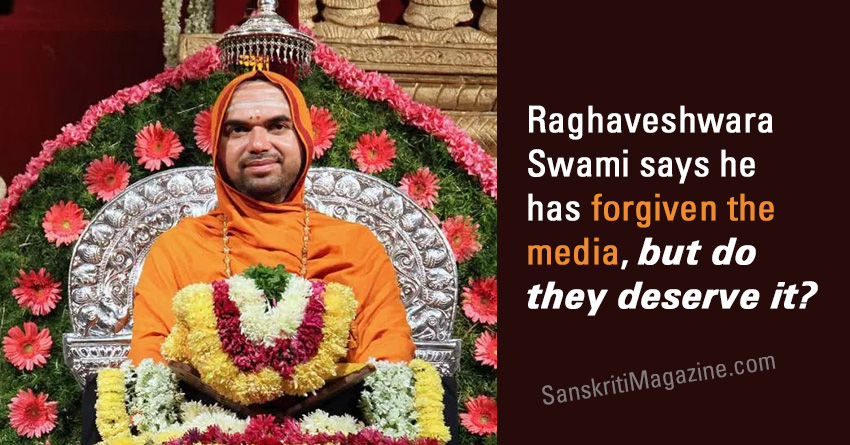 What does a common man perceive about what happens around him? The story that the media says. I was once a common man who believed what the media said, what it wanted me to perceive and know. But then there came a shocker for me. A media news defaming the spiritual Guru whose abode would give me all the peace that I needed. The smile would be a bliss that my heart needed, and the serenity of his divine presence would make my day. A lady had filed a case on him. A rape case that too. And she said the guru had forced her a whopping 169 times in the name of God and expressed that she underwent divine displeasure pleasuring the swami. Yup, I am talking about the Shreemad Jagadguru Shankaracharya Shree Shree Raghaveshwara Bharati Shri Swamiji. I don’t know how the swami handled the shocker. How could he keep his composure and how could he keep that innocent everlasting smile in his face and say

He would always say “Truth alone triumphs; not falsehood.” He would say all these testing times come and happen for a good. He would say even Seetha maathe had to go through Agniparikshe to prove her purity. We are after all humans. These tests are for us to make us strong and make us realize who our true followers and true friends are. Probably that is the amount of maturity and unswerving steadfastness he had. But that was not the case with us around him. We believed him firmly. I used to carry his photo in my wallet all the time. But I had to answer a few questions and clarify a few people about my beliefs in him after this incident. It went on for 2 years. And the media defamation also continued. Friends who had accompanied me in my visits to him had asked dreadful questions about his chastity and purity. Yes that is what the media is capable of doing to people I guess. Tell a lie 100 times people start believing it as the truth. And probably that is what happened even with these people.

The conspiracy and conspirators had tried a lot, there were protests, there were media interviews, there were cooked up stories that would beat Christopher Nolan’s best movies. But there is one thing about the great people and saints, As the Subashitha says,

Which means, what harm can Kalipurusa do to him whose heart is full of kindness, whose speech is adorned with truth and whose body is for the good of others. The Shri would still stay calm, humble, steadfast in his works and still adorn that smile in his face and say these tests are are like clouds covering the Sun, and they would pass by one day or the other. But the conspiracy continued. There were people who wanted the Shri, the pontiff of the Gokarna  Samasthana to step down, they wanted him to undergo tests which no saint would be permitted to do in the name of justice and truth. And when he rejected to undergo them there was issues and news again. They did shows which hugely boosted their dropping TRP’s and defamed him ever so more. But the Shri Shri stood by his virtues and continued to be calm, his greatness was not affected by any of these. It is rightly said,

A good person never gives up his nature even when he is caught in calamity. Camphor caught fire emits more fragrance.

And now the court of law has upheld the innocence and chastity of his holiness I wished and hoped everything was clear and clean. But then media is media. Well, they can make a news out of everything. The judgement had said, ” The prosecutrix was not capable of proving it to the court that she was forced, it said if at all some act of this kind has happened it become consensual and not rape!( That was a clarification to deny the allegation of rape and to nullify such claims). Media picked up that line and made a news out of it.  The set of lines I am going to write down below can be termed and named “saffron Journalism”, but I really don’t care. Having clarified that I have a few questions to the media.

I am not seeking answers because I know I won’t get any. Because moral responsibility and social awareness are big terms for media and people of this kind. They are behind TRP, Instant fame, name and money. It would be so foolish of me to expect an answer from them. But again let me tell you this, people are watching you and they are intelligent to decide what is right, and what is not. They are capable of judging your credibility too. Your lies won’t last long. And the truth would always prevail. Because no matter what सत्यमेव जयते!!!!

Shivaji through the eyes of Swami Vivekananda