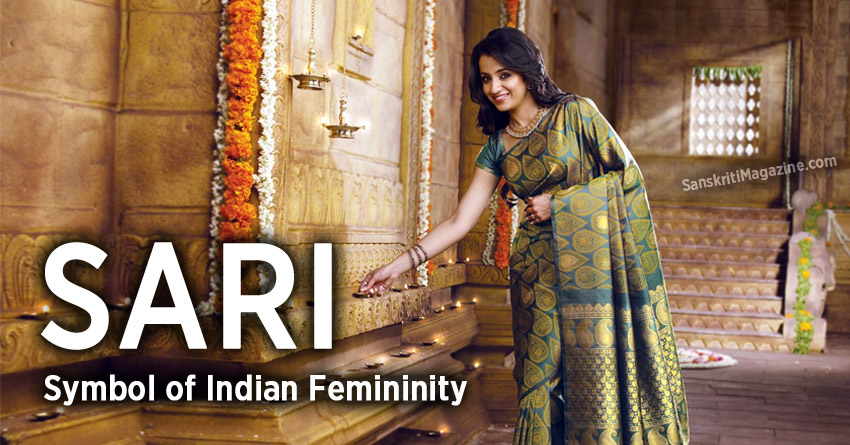 One of the most sensual attires of a woman in India is undoubtedly the sari. It is a long unstitched piece of cloth, usually 6 yards long that is draped in a set pattern. It accentuates the curves of a woman and the mid-riff is usually exposed. However, the way of draping a saree may differ from place to place. The way it is draped in the north may be slightly different from how it is draped in the south. It is available in a plethora of fibers, designs and colors. The sari is usually worn with a blouse that covers the upper part of the body and underneath it is the petticoat, which helps to tuck in the pleats of the saree to hold it in place. 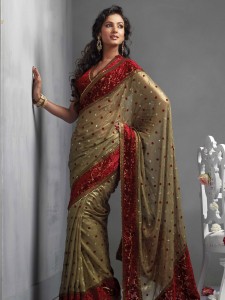 The history and origin of sari seems to date back to the period of the establishment of civilization. Evidence states that women in the Indus Valley civilization used to cover themselves with a long piece of cloth, draped like a trouser. However, the word ‘sari’ originated from the Prakrit word ‘sattika’, which is mentioned in the early Buddhist literature. The word got shortened and was called sati, which further evolved into sari.

A statue recovered from the Indus Valley Civilization depicts a female priest wearing a cloth draped like a sari. The sari used to be draped in a way so that it divides the two legs and forms a trouser like attire. This was basically done to aid the temple dancers in their movements and also cover to their modesty. It is believed that the ‘dhoti’, which is the oldest Indian garment that was draped, is the foundation behind the sari. Till the 14th century, the dhoti was worn by both men and women.

The early statues of Goddesses show that the sari was draped in a sensual manner, like a ‘fishtail’, which was tied at the waist, covered up the legs and came in front of the legs like a decorative drape. During that era, the upper part of the body was either partially covered or was left bare. Down south in the state of Kerala, one can still see people wearing the traditional sari, which is a two piece garment, consisting of a lungi and a shawl. With the coming of the Muslims, the ghagra or the petticoat was discovered and clothes were stitched.

Before that, Hindus believed piercing clothes with needles was impure.

The blouse came into existence with the Muslims and also the British. Since then, sari has come of age and now many new styles are being experimented with. But the main aspects of the sari like the blouse and the petticoat have been carried over in the modern times. Thus, sari is the perfect garment to enhance the beautiful curves of the Indian woman and has done so since times immemorial. 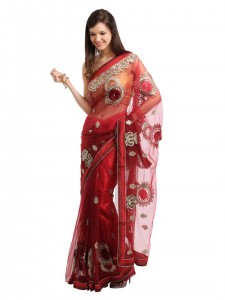 “The Sari, it is said, was born on the loom of a fanciful weaver. He dreamt of Woman. The drape of her tumbling hair. The colors of her many moods. The shimmer of her tears. The softness of her touch. All these he wove together. He couldn’t stop. He wove for many yards. And when he was done, the story goes, he sat back and smiled and smiled and smiled.”

The Indian Sari, believe it or not, is more than 5000 years old! It was first mentioned in Rig Veda, the oldest surviving literature of the world, written somewhere around 3000 BC. The Sari, originally intended both for men and women, is probably the longest incessantly worn dress in the history of mankind.

Sari (originally Chira in Sanskrit, meaning Cloth), is a rectangular piece of cloth, usually 5-9 yards in length. The approximate size of a sari, to make it more understandable is 47 inches by 216 inches. For an untailored length of cloth, the fabric of the sari is very well thought-out, and the design vocabulary very sophisticated.

Every Sari has a design theme, and often has a story to tell. The main field of the sari is framed on its three sides by decorative borders. Two of these borders run along the longitudinal sides of the sari, and the third comprises the end piece of the sari, and is known as its Pallav.

The Pallav is a broader, and more intensified version of the two longitudinal borders. This end piece is the part of the sari that is draped over the shoulder and left to hang over the back or front. For example, if the two longitudinal borders have vines with leaves embroidered on them, the end piece or the pallav will have a lush tree with lots of leaves, and maybe even some flowers on it.

India has a diverse and rich textile tradition. The origin of Indian textiles can be traced to the Indus valley civilization. The first literary information about textiles in India can be found in the Rig Veda, which refers to weaving.

The four general regions of India are each famous for different kinds of saris: 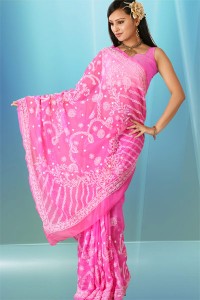 Bandhni (Rajasthan, Gujarat):
Also known as Tie-Dye or Lehriya, Bandhni saris use an ancient technique of tying the cloth in patterns before dipping it in a dye bath. Rajasthan and Gujarat are famous for these brilliant tie-dyes. Bandhni saris are associated with festivals, seasons, and rituals for which there are particular patterns and colors. You’ll also find them decorated with mirrors and bead work.

Chikan (Lucknow)
Chikan embroidery is a specialty of the Uttar Pradesh city of Lucknow. Its unique style was developed during the Mughal period (from the 16th to the 18th century). It is also called Lakhnavi Chikankari.

Kota Doria (Rajasthan):
Named after Kota, a small district in Rajasthan, this type of sari uses a fine woven fabric containing a checked pattern in the weave itself. These saris are very delicate, lightweight, and porous, which helps with surface ornamentation techniques like tie-dye, hand-block printing, embroidery, and appliqué work.

Banarasi (Benaras):
The Banarasi sari is a must for brides. This classic style came into existence during the Moghul era. The signature design of Banarasi saris is a narrow fringe like pattern – called Jhalar – found along the inner and outer border of the fabric.

Taant (Bengal):
The word Taant literally means “Made on the Loom”. Also known as Bengal Cotton saris, these are a traditional sari type worn by Bengali Women. Taant saris are a must-have for all cotton lovers.

Baluchari (West Bengal):
The Baluchari type of sari is about 200 years old. Made of silk and woven on looms, the borders of these saris depict stories from Indian epics like Mahabharata and Ramayana. Baluchari saris use only silk threads – no zari.

Kantha (West Bengal)
Known for its delicate embroidery, Kantha saris are identifiable by a decorative motif with a running stitch. This art is practiced by rural women in West Bengal as a hobby, and each Kantha sari is a result of hard work and labor. 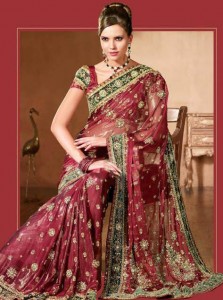 Kanchipuram (Tamilnadu):
Kanchipuram saris are characterized by the gold-dipped silver thread that is woven into premium quality silk. Kanchipuram is actually a town in Tamilnadu. The town’s fabulous weaving history goes back centuries. Kanchipuram remains untouched by fashion fads, so it still maintains traditional weaving styles and techniques. The silk base of these saris is thicker than any other silk sari, which makes it the most expensive kind of silk sari in India. It is believed that “The heavier is the silk, the better is the quality”. The most common motifs found in Kanchipuram saris are Peacock and Parrot.

Madisar (Tamilnadu):
Madisar is a type of sari which is worn by the Brahmin community (priestesses and scholars) in Tamilnadu. It is a very important part of the Iyer and Iyengar cultures. Brahmins wear Madisar saris for any important occasion – starting with marriage, followed by Seemandham (a sort of baby shower), important poojas (prayer rituals), and death ceremonies. It is 9 yards in length instead of the common 6 yards.

Bandhej (Gujarat):
Bandhej saris use the Gujarati style of tie-dye. The multi-coloring method involves working in the lightest shade first, after which the fabric is tied and a darker color is introduced. Any number of color schemes are appropriate. The quality of Bandhej saris can be determined by the size of the dots: The smaller and closer to the size of a pinhead the dots are, the finer is the quality of the Bandhej.

Patola (Gujarat):
“Oh dear, get me those expensive Patola saris with painted peacocks from Patan”, goes a popular Gujarati song. Leading ladies like Sonia Gandhi, Priyanka Gandhi, and Nita Ambani would relate to the lyrics better than many others.

Patola saris are the most time consuming and elaborate of all, as they have intricate five-color designs which are resist-dyed into both warp and weft threads before weaving. Patan, Gujarat produces only 25 to 30 such saris per year. They can cost between Rs. 1 lakh to Rs. 10 lakh (approximately USD $2,000 – $20,000)!

Chanderi (Madhya Pradesh):
The Chanderi sari from Madhya Pradesh is light and meant for Indian summers. It is made in silk or fine cotton.

Invoking the Goddess
Rethinking the concept of arranged marriages
Comment