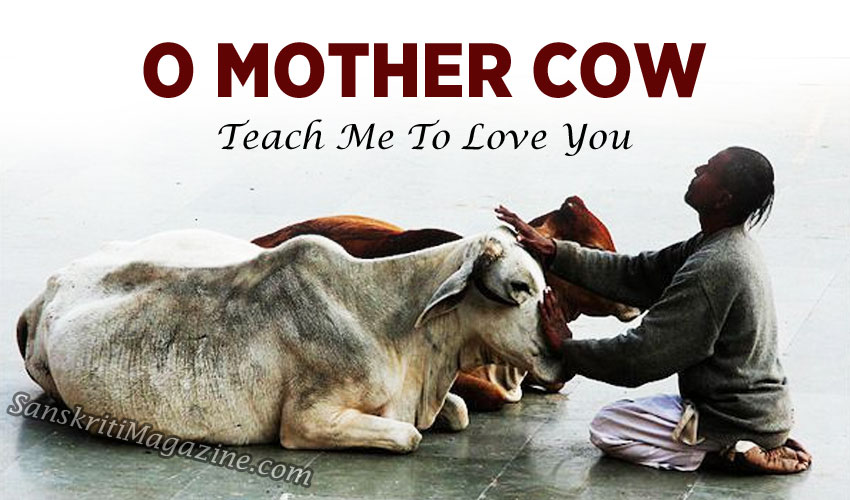 It’s not about vegetarianism or non vegetarianism nor is it about agriculture based economy; it is about sentiments, about emotions, about our love for the cow. Sadhguru Jaggi Vasudev explains it thus, ‘When our mother’s breast could not feed us anymore, and the next level of food did not come to us, the cow was like a mother for everybody. All of us at some point have sustained and nourished ourselves on cows’ milk, is it not? It became very sacred because it is a life nourisher and what should have gone to its own offspring, it allows us. Because it nourishes us in that way, it is like the number two mother in our life. So in this culture some sanctity was given to the cow. Another reason is that the cow has very human kind of emotions. The cow is one animal which responds to your own grief and sorrow. When you are very miserable, the cow feels this and sheds tears for your pain. That is the reason why in India it was said you should not kill a cow because its emotions are close to that of a human being’.

Cow crops up in our spiritual minds just as the flute, the peacock and the gopis come up with the cow herd God Krishna. No picture of Krishna is complete without a cow, flute and peacock feather. Killing the cow for us becomes as emotional as killing Krishna Himself. In Ramcharitmanas, demi-gods invoke Lord Vishnu to save them from demons, “Go dwij hitkaari Jai asurari sindhu suta priyakanta” (Victory to Lord Vishnu, Who cares for the cows and sages, Who kills demons, and Who is the beloved of Ocean’s daughter Laxmi).

In Bhagvata Purana earth takes the form of a cow and runs away, but King Prithu chases it and assures her full protection. Sri Rama’s forefather King Dilip and wife Sudakshina, being childless, were advised by Guru Vashishtha to serve his cow Nandini to fulfil their desire. They cared for Nandini like their own child and after twenty-one days when a lion came to kill the cow, King Dilip offered himself as food to the lion. The lion vanished and a happy Nandini blessed them. They had a son whom they named Raghu and the family tree continued under the name of Raghuvansh.

Then there was King Vishwamitra who ordered his soldiers to snatch the divine calf Nandini, offspring of Kamadhenu, from sage Vashishtha’s ashram but the sage sprang up thousands of soldiers from his yogic power and defeated them. The incident inspired Vishwamitra to go to the forests to attain spiritual power. King Kartavirya stole the kaamdhenu calf from sage Jamdagni’s ashram on seeing that the calf produced a magnificent feast to feed his soldiers but Jamdagni’s son Parshurama brought back the calf after bloodshed.

The entire Braja Leela revolves around Krishna and the cows. Krishna belongs to a family of cow herds and has over a lakh cows in His home yet loves to steal butter and milk from houses. When He is five He takes the cows for grazing barefoot out of respect and walks behind them so that the holy dust settles on His face. Seeing His love for cows He was called Gopala (nurturer of cows) and Govinda (giver of pleasure to cows). In Mahabharata, Lord Krishna tells Arjuna, ‘dhenunam asmi kamadhuk’, ‘Among cows I am the wish fulfilling cow’.

The 1928 Report of Royal Commission on Agriculture said that the low degraded local Indian cow breeds were weak and useless and thus the invasion of foreign breeds of cow began. The cows that Krishna played with were ignored and became extinct. Scientists of National Bureau of Animal Genetic Resources, Karnal have concluded in their tests that Indian cow and buffalo breeds possess a rich A2 allele gene that provides a better and healthier quality of milk than foreign breeds. In Indian milk breeds of cows and buffalos, A2 allele gene is 100 per cent, while in foreign breeds, Holstein Friesian and Jersey, it is around 60 percent. The foreign breeds produce more milk than Desi cows, but due to A1 gene that milk is inferior and its long term usage can cause several health disorders. The scientists found that in milk yielding Desi cows, A2 allele was 100 per cent, while in Desi breeds used for farming, its status was around 94 per cent. NBAGR Director B K Joshi said this was found after testing A2 allele of beta casein gene in native cows like Red Sindhi, Sahiwal, Tharparkar, Rathi and Gir etc. Counter allele to A2 is A1, which is considered to be associated with diabetic, obesity, cardiovascular diseases etc. Milk of Indian Desi Cows is mostly rich in Beta Carotene. Most dairies across India are now producing milk processed from Jersey cows. These were actually a breed of a wild animal named URUS/AUROCHS that was hunted for meat. It was cross bred with various animals and with Desi cows of India and thus was born the Jersey.

Indisputable yogis and saints came together on a platform to save the desi cow in Morari Bapu’s Ram Katha in Govardhan from 17th to 25th November 2012. Bapu said that all had come because it has been held sacred since the Vedic times due to its saatvic nature. Lectures preceded the katha stressing on the importance of stopping slaughter of cows. It is a pity; they cried in unison, that while there was no limit to meat shops, bars, gambling places but there is a ban on opening cow shelters in the city. People wanting to care for a cow and feed it have to faraway. Cow which is a domestic animal has been demoted to isolated places where the common man cannot reach it. Vedas have declared that caring for a cow will not only fulfill all four fruits of human birth- Dharma, Artha, Kama, Moksha but it also earns us the love of God.

Many sages in past have recounted getting vision of Krishna by tending a cow, many have got jobs; have got relief from diseases, court cases just by caring for a cow. Respect was meant to be given to a cow not just by one community but by all beings of earth and science too has agreed though much later. Vedas stated that cow milk, urine and cow dung is good for physical, mental and spiritual health and that is referred to it as Gau- Mata(Mother), Kamadhenu (wish fulfilling), Aghnya (never to be killed), Surabhi (fragrant) and Suradhenu (cow of Heaven). It is believed that one who donates a cow is able to cross the terrifying Vaitarini River, between mrityuloka (earth) and pataal loka (hell), by holding its tail. For an animal the tail is most sensitive part but a cow stands meekly when its tail is held denoting its total surrender at the feet of man. Tail means last and when one does even the last bit for a cow one earns its gratitude for this life and after life. Tending a cow leads to change in Nature-outer and inner. One acquires the same saatvic qualities like non injury, kindness, compassion, selfless love, calmness and control on sensual cravings.

Those who have nurtured a cow even for a few days realize with wonder that it responds to loving words, becomes part of our life, shows its gratitude by producing more milk and the very home where it lives happily is said to become free from environmental diseases like malaria and dengue. She is surabhi due to fragrance of purity coming from her. She is suradhenu because she protects (su-suraksha), is our guard (ra-rakshak), has immense patience (dhe-dhairya) and causes no loss (nu-nuksaan). Faith in cow is equivalent to having faith in one’s Guru or God for it brings utmost peace and harmony in the heart. Offspring of Surabhi and Kamadhenu cow are the sacred cows found in India identified by hump on their back and soft folds of skin under the necks. Sadly, several varieties of Desi cows have become extinct because we denied her space in our home and love in our hearts.

Rethinking the concept of arranged marriages