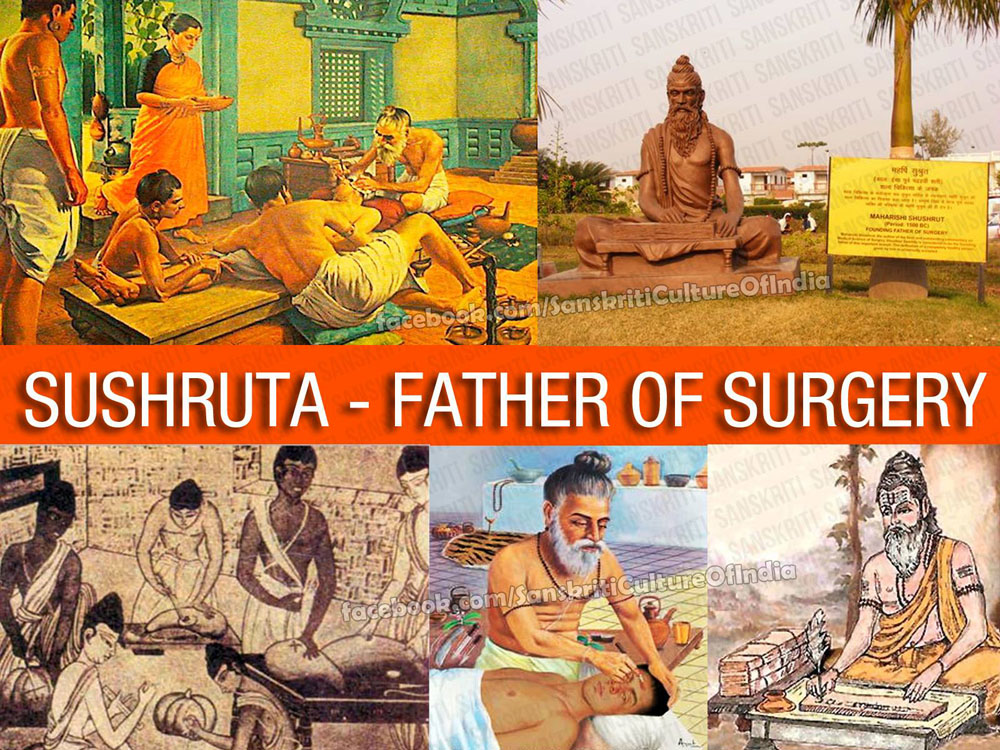 Sushruta was a surgeon and teacher of Ayurveda who flourished in the Indian city of Kashi by the 6th century BC.

He was a disciple of Dhanwantari, who is recognized as the Lord deity of Ayurveda (science of life) the Indian system of medicine. He was identified as the son of the Vedic sage Visvamitra.

The medical treatise Sushruta Samhita—compiled in Vedic Sanskrit—is attributed to him. The Sushruta Samhita refers to the eight branches of Ayurvedic medicine. The text is divided into six sections and 184 chapters. Sushruta details about 650 drugs of animal, plant, and mineral origin. In addition, it describes more than 300 kinds of operations that call for 42 different surgical processes and 121 different types of instruments.

Other chapters in Sushruta make clear the high value put on the well-being of children, and on that of expectant mothers. Sushruta’s coverage of toxicology (the study of poisons) is more extensive than that in Charaka, and goes into great detail regarding symptoms, first-aid measures, and long-term treatment, as well as classification of poisons and methods of poisoning. His samhita discusses in minute detail how to perform prosthetic surgery to replace limbs, cosmetic surgery on different parts of the body, cesarean operations, setting of compound fractures, and even brain surgery.

Sushruta details about 125 surgical instruments used by him, mostly made of stones, wood and other such natural materials. Use of shalaka, meaning foreign body (rods or probe), is also mentioned by Sushruta. Some classifications found in the Sushruta Samhita are not even traced by modern medical science. He is the first surgeon in medical history who systematically and elaborately dealt with the anatomical structure of the eye.

Sushruta described diabetes (madhumeha) as a disease characterized by passage of large amount of urine, sweet in taste, hence the name “madhumeha” — honey like urine. He goes on to say that diabetes primarily affects obese people who are sedentary and emphasized the role of physical activity in amelioration of diabetes.

Though the discovery of circulation is attributed to William Harvey; it is interesting to note that Sushruta had the knowledge of a structure like heart and its role in circulation of “vital fluids” through the ‘channels’. His vivid account of angina (“hritshoola “, meaning heart pain) is marvelous, though he did not use the exact term as angina. It embodies all the essential components of present day definition, i.e. site, nature, aggravating and relieving factors and referral. According to him angina is chest pain which is precordial, temporary, exertional, emotional, burning like and relieved by rest. He also linked this kind of pain to obesity (medoroga). Besides these, he has also described the symptoms of “vatarakta” which are similar to that of hypertension.

Sushruta describes the day-to-day life of the physician in ancient India, who made the rounds of patient’s residences and also maintained a consulting room in his own home, complete with a storeroom of drugs and equipment. According to him, although doctors could command a good living, they might also treat learned brahmins, priests and the poor for free. Sushruta describes the ideal qualities of a nurse, and suggests that doctors may have been required to have licenses.

Sushruta extols the benefits of clean living, pure thinking, good habits and regular exercise, and special diets and drug preparations. A plant called soma that is described in the early texts but has never been clearly identified was recommended as a treatment for rejuvenating body and mind. Sushruta explains the need of all living creatures to sleep and to dream as a function of two principles of the mind that give glimpses of previous existences or warn of future ill health. When both principles are weakened, results in coma.

Sushruta is also the father of Plastic Surgery and Cosmetic Surgery since his technique of forehead flap rhinoplasty that he used to reconstruct noses that were amputated, is practiced almost unchanged in technique to this day.

Sushruta had become very famous and his work was translated first into Arabic. Subsequently it reached Europe through Latin and English. Long before the so-called modern medicine and its surgical wing acquired its professional dimensions, Sushruta had traversed a long way ahead of the rest of the world of medical practice and training.

Because of his seminal and numerous contributions to the science and art of surgery he is also known by the title “Father of Surgery”.

Sushruta’s name is synonymous with India’s surgical inheritance, as correctly summarized by the ‘Legacy of Sushruta” (by Dr. M.S. Valiathan) and in proclaiming the greatness of India’s great heritage of its culture.