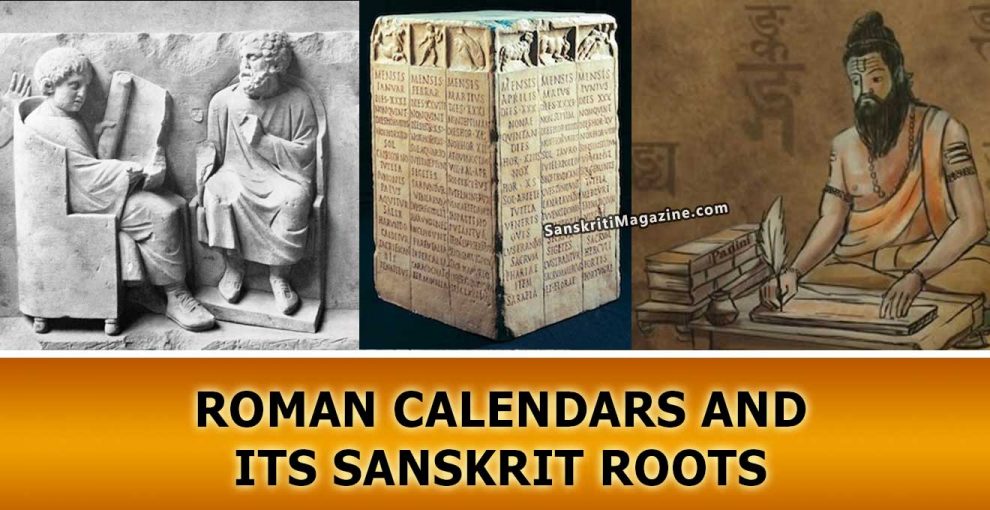 The influence of Sanskrit is pervasive, its roots are seen in the numerical system as the numbers zero to ten all reflect this ancient language. Constellations such as Sagittarius, Taurus, Virgo, Aquarius, Gemini and Cancer all have their roots in Sanskrit and as we shall see below the months of the year are nearly all derived from the Sanskrit language.

Two thousand years ago the Old Roman calendar covered a ten month period which began with Martius and included Aprilis, Maius, Junius, Quintilis, Sextilis, September, October, November and December. This was followed by an unnamed winter period which eventually became January and February.

November is the ninth month of the year, its from the Latin Novem meaning “nine” and this is from the Sanskrit Navam meaning “nine”. In Sanskrit we have Navadvipa meaning “nine islands” and we also have the Navaratnas, the nine jewels such as ruby for Surya, pearl for Chandra, red coral for Mars, emerald for Mercury, yellow sapphire for Jupiter, diamond for Venus, blue sapphire for Saturn, hessanite to appease Rahu and cats eyes for Ketu. In Thailand Queen Sirikit wore all nine jewels as part of the famous necklace known as the “Queen Sirikit Navaratna”.

Sas is reflected in the Persian Shash, the Dutch Zes, the Old German Sehs, the Old Church Slavonic Sesti, the German Sechs, the Latin Sex and through a combination of these dialects we get the number Six. Sextilis was eventually replaced by the month of August, in memory of its reformer Julius Augustine Caesar.

The fourth month of the year is June, this is the Roman god Juno who is associated with youth. Its source is the Sanskrit Yuva and Yuvana meaning “youth” “young”, its also the source of these words, and in Sanskrit its seen as the Yuvaraj meaning the “young king”. Its influence is seen more clearly in the Italian city of Juventus who was the “Roman God of youth” its not too difficult to see how “yuva” and “juve” are from the same source and from this comes June the fourth month of the Old Roman calendar.

Throughout Rome on the doors, gates, passageways, you would find the image of Janus, the God of beginnings. It’s a mirror image of Ganesh, who throughout India would also be found upon gates, doors and passageways and also known as the God of beginnings. The “Jan” in Janus is the Sanskrit Jan meaning “birth” “origin” and by extension “beginning” and this becomes January the beginning of the year.

“Anachronistic as this labyrinthine mythology may appear to the foreign mind, many of India’s ancient theories about the universe are startlingly modern in scope and worthy of a people who are credited with the invention of the zero, as well as algebra and its application of astronomy and geometry; a people who so carefully observed the heavens that, in the opinion of Monier-Williams, they determined the moon’s synodical revolution much more correctly than the Greeks.” Three Ways of Asian Wisdom – By Nancy Wilson Ross p. 64 – 67 and 74 – 76).