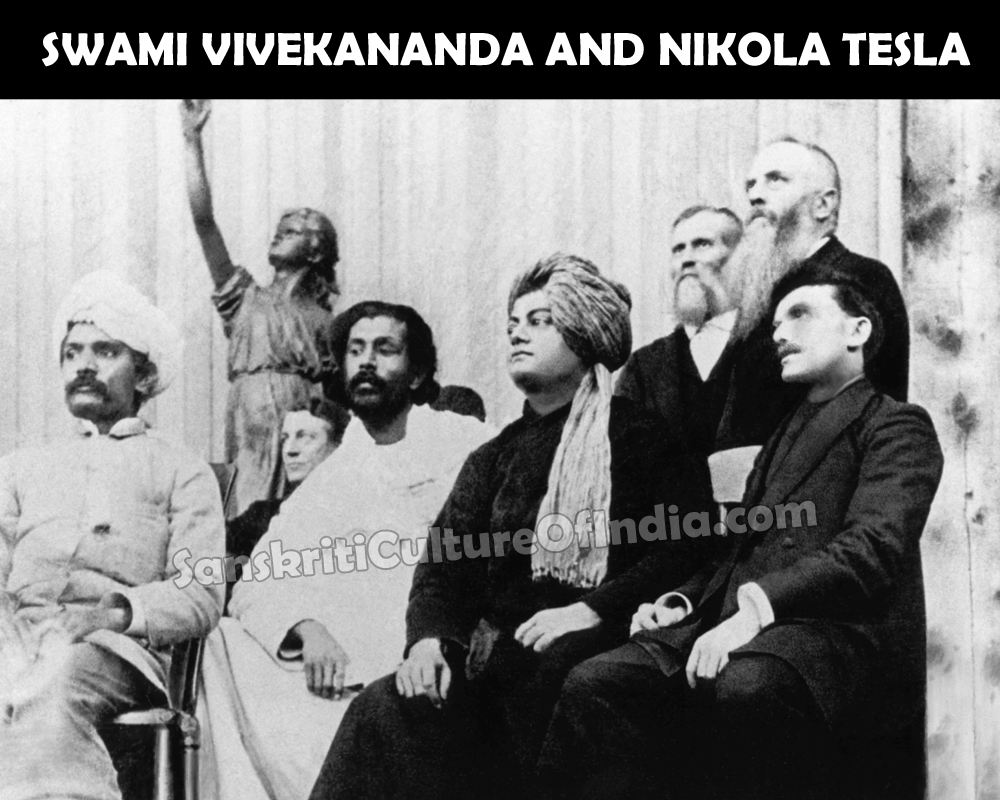 Nikola Tesla used ancient Sanskrit terminology in his descriptions of natural phenomena. As early as 1891 Tesla described the universe as a kinetic system filled with energy which could be harnessed at any location. His concepts during the following years were greatly influenced by the teachings of Swami Vivekananda. Swami Vivekananda was the first of a succession of eastern yogi’s who brought Vedic philosophy and religion to the west. After meeting the Swami and after continued study of the Eastern view of the mechanisms driving the material world, Tesla began using the Sanskrit words Akasha, Prana, and the concept of a luminiferous ether to describe the source, existence and construction of matter. This paper will trace the development of Tesla’s understanding of Vedic Science, his correspondence with Lord Kelvin concerning these matters, and the relation between Tesla and Walter Russell and other turn of the century scientists concerning advanced understanding of physics. Finally, after being obscured for many years, the author will give a description of what he believes is the the pre-requisite for the free energy systems envisioned by Tesla. 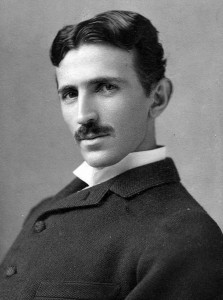 By the year 1891, Nikola Tesla had invented many useful devices. These included a system of arc lighting (1886), the alternating current motor, power generation and transmission systems (1888), systems of electrical conversion and distribution by oscillatory discharges (1889), and a generator of high frequency currents (1890), to name a few. The most well known patent centers around an inspiration that occurred while walking with a friend in a park in Budapest, Hungary. It was while observing the sunset that Tesla had a vision of how rotating electromagnetic fields could be used in a new form of electric motor. his led to the well known system of alternating current power distribution. In 1891 however, Tesla patented what one day may become his most famous invention. It is the basis for the wireless transmission of electrical power and is know as the Tesla Coil Transformer. It was during this year that Tesla made the following comments during a speech before the American Institute of Electrical Engineers;

“Ere many generations pass, our machinery will be driven by a power obtainable at any point in the universe. This idea is not novel… We find it in the delightful myth of Antheus, who derives power from the earth; we find it among the subtle speculations of one of your splendid mathematicians… Throughout space there is energy. Is this energy static or kinetic.? If static our hopes are in vain; if kinetic – and this we know it is, for certain – then it is a mere question of time when men will succeed in attaching their machinery to the very wheelwork of nature.” 1

This description of the physical mechanisms of the universe was given before Tesla became familiar with the Vedic science of the eastern Nations of India, Tibet, and Nepal. This science was first popularized in the United States and the west during the three year visit of Swami Vivekananda.

The Vedas are a collection of writings consisting of hymns, prayers, myths, historical accounting, dissertations on science, and the nature of reality, which date back at least 5,000 years. The nature of matter, antimatter, and the make up of atomic structure are described in the Vedas. The language of the Vedas is known as Sanskrit. The origin of Sanskrit is not fully understood. Western scholars suggest that it was brought into the Himalayas and thence south into India by the southward migrations of the Aryan culture. Paramahansa Yogananda and other historians however do not subscribe to that theory, pointing out that there is no evidence within India to substantiate such claims. 2

There are words in Sanskrit that describe concepts totally foreign to the western mind. Single words may require a full paragraph for translation into english. Having studied Sanskrit for a brief period during the late 70’s, it finally occurred to this writer that Tesla’s use of Vedic terminology could provide a key to understanding his view of electromagnetism and the nature of the universe. But where did Tesla learn Vedic concepts and Sanskrit terminology? A review of the well known biographies by Cheney, Hunt and Draper, and O’Neil 3,4,5, reveal no mention of Tesla’s knowledge of Sanskrit. O’Neal however includes the following excerpt from an unpublished article called Man’s Greatest Achievement;

“There manifests itself in the fully developed being , Man, a desire mysterious, inscrutable and irresistible: to imitate nature, to create, to work himself the wonders he perceives…. Long ago he recognized that all perceptible matter comes from a primary substance, or tenuity beyond conception, filling all space, the Akasha or luminiferous ether, which is acted upon by the life giving Prana or creative force, calling into existence, in never ending cycles all things and phenomena. The primary substance, thrown into infinitesimal whirls of prodigious velocity, becomes gross matter; the force subsiding, the motion ceases and matter disappears, reverting to the primary substance.”

According to Leland Anderson the article was written May 13th, 1907. Anderson also suggested that it was through association with Swami Vivekananda that Tesla may have come into contact with Sanskrit terminology and that John Dobson of the San Francisco Sidewalk Astronomers Association had researched that association. 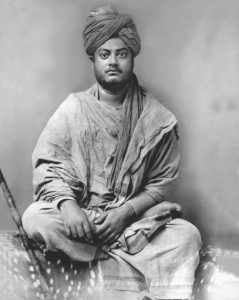 Swami Vivekananda was born in Calcutta, India in 1863. He was inspired by his teacher, Ramakrishna to serve men as visible manifestations of God. In 1893 Swami Vivekananda began a tour of the west by attending the Parliament of Religions held in Chicago. During the three years that he toured the United States and Europe, Vivekananda met with many of the well known scientists of the time including Lord Kelvin and Nikola Tesla. 7 According to Swami Nikhilananda;

Nikola Tesla, the great scientist who specialized in the field of electricity, was much impressed to hear from the Swami his explanation of the Samkhya cosmogony and the theory of cycles given by the Hindus. He was particularly struck by the resemblance between the Samkhya theory of matter and energy and that of modern physics. The Swami also met in New York Sir William Thompson, afterwards Lord Kelvin, and Professor Helmholtz, two leading representatives of western science. Sarah Bernhardt, the famous French actress had an interview with the Swami and greatly admired his teachings. 8

…Mr. Tesla was charmed to hear about the Vedantic Prana and Akasha and the Kalpas, which according to him are the only theories modern science can entertain…..Mr Tesla thinks he can demonstrate that mathematically that force and matter are reducible to potential energy. I am to go see him next week to get this mathematical demonstration. 10

Swami Vivekananda was hopeful that Tesla would be able to show that what we call matter is simply potential energy because that would reconcile the teachings of the Vedas with modern science. The Swami realized that “In that case, the Vedantic cosmology [would] be placed on the surest of foundations”. The harmony between Vedantic theories and and western science was explained by the following diagram;

Tesla understood the Sanskrit terminology and philosophy and found that it was a good means to describe the physical mechanisms of the universe as seen through his eyes. It would behoove those who would attempt to understand the science behind the inventions of Nikola Tesla to study Sanskrit and Vedic philosophy.

Tesla apparently failed to show the identity of energy and matter. If he had, certainly Swami Vivekananda would have recorded that occasion. The mathematical proof of the principle did come until about ten years later when Albert Einstein published his paper on relativity. What had been known in the East for the last 5,000 years was then known to the West.

Brahman is defined as the one self existent impersonal spirit; the Divine Essence, from which all things emanate, by which they are sustained, and to which they return. Notice that this is very similar to the concept of the Great Spirit as understood by Native American cultures. Ishvara is the Supreme Ruler; the highest possible conception of the Absolute, which is beyond all thought. Mahat means literally the Great One, and is also interpreted as meaning universal mind or cosmic intelligence. Prana means energy (usually translated as life force) and Akasha means matter (usually translated as ether). Dobson points out that the more common translations for Akasha and Prana are not quite correct, but that Tesla did understand their true meanings.

The meeting with Swami Vivekananda greatly stimulated Nikola Tesla’s interest in Eastern Science. The Swami later remarked during a lecture in India, “I myself have been told by some of the best scientific minds of the day, how wonderfully rational the conclusions of the Vedanta are. I know of one of them personally, who scarcely has time to eat his meal, or go out of his laboratory, but who would stand by the hour to attend my lectures on the Vedanta; for, as he expresses it, they are so scientific, they so exactly harmonize with the aspirations of the age and with the conclusions to which modern science is coming at the present time”.