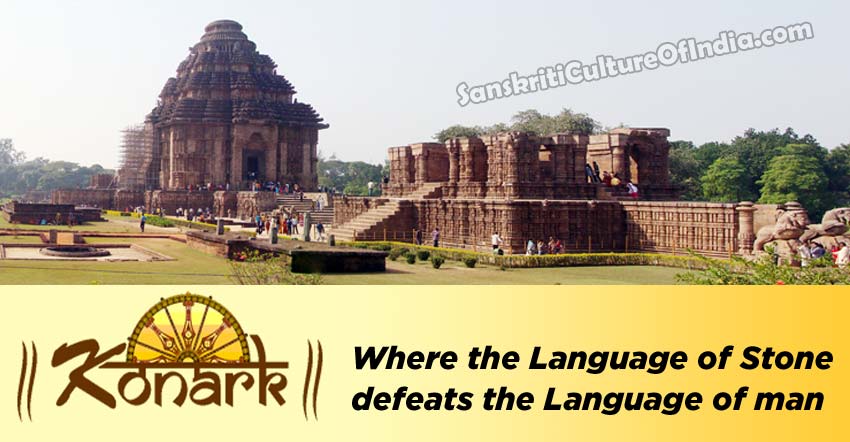 The magnificent Sun Temple at Konark is the culmination of Odisha temple architecture, and one of the most stunning monuments of religious architecture in the world.

Built by the King Narasimhadeva in the thirteenth century, the entire temple was designed in the shape of a colossal chariot with seven horses and twenty four wheels, carrying the sun god, Surya, across the heavens. Surya has been a popular deity in India since the Vedic period. 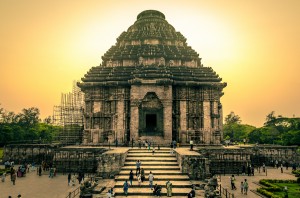 Orissa unlike many other parts of India has the prized distinction of possessing an uninterrupted series of temples illustrating the history of the well-defined Kalinga (former name of Orissa) from its very inception to decline, and the Sun Temple of Konark marks the highest point of achievement.

Konark, the seat of World famous Sun Temple, located in the District of Puri, forms one of the three points of the  “Golden Triangle of Tourism”  in the State of Orissa, the other two being Bhubaneswar, the city of Temples and Puri, the abode of Lord Jagannath. This Temple chariot of the Sun God on the golden sands of teh Bay of Bengal is a 13th Century architectural marvel. Today, Konark is not merely a symbol of Orissa’s great architectural craftsmanship, it is also the most sought after centre of attraction for tourists all over the World. Its serene atmosphere coupled with a quiet but majestic sea-shore is regarded as an ideal place for vacation by domestic as well as foreign tourists.

Konark is situated at comfortable distance from the famous religious and tourist centre of Puri (35 K.M.) and the capital city of Bhubaneswar (65 K.M.)

The Sun god worshipped in Arka Kshetra is also called Konark. In ‘Brahma Purana’ the Sun God in Ark-kshetra has been described as Konaditya. So it is evident that the place where the Kona aditya (or Kona-arka, the Sun god) was worshipped was also popularly called Konark.

It is described in Purusottam Mahatmya that Lord Vishnu after killing the demon Gayasur, to commemorate the glory of his victory, placed his Sankha (conch) in Puri, Chakra (disc) in Bhubaneswar, Gada (mace) in Jajapur and Padma (lotus) in Konark and they were later known as Sankha Kshetra, Chakra Kshetra, Gada Kshetra and Padma Kshetra respectively.

This corner on the east sea coast houses the ruins of a temple, exquisitely built to resemble a gigantic chariot with impeccably carved wheels, columns and panels. It stands as a mute reminder of the times when Orissan architecture has reached its pinnacle.

The main Temple was called by European sailors “The Black Pagoda” as it formed an important landmark for them in their coastal voyage. Contrasting to this, the white washed Temple of Lord Jagannath at Puri was known as the white pagoda.

In ancient times worship of Sun god was in vogue and the people were accustomed with the worship of two Supreme deities – one mother Earth as Dharti Mata and the other the Sun, the Dharam devata. Sun god is regarded as the supreme lord of the universe and the prime object of life giving energy, being the healer of diseases and bestower of desires.

Surya has been a  popular deity in India since Vedic period.  It is therefore described in Rig Veda regarding Prayer of Sun God as follows:

Aloft his beams now bring the good
Who knows all creatures that are born,
That all may look upon the Sun.
The seven bay mares
that draw thy car,
Bring thee to us, far-seeing good,
O Surya
of the gleaming hair.
Athwart in darkness gazing up,
to him the higher light,
we move
Have soared to Surya,
the God Among Gods,
the highest light.

SANCTITY OF THE PLACE:

It is described in Puranas that even the Gods like Sun and Siva themselves had performed penance in this Arka Kshetra to get rid of their sins. According to puranic legends a journey to this sacred place removes all sorts of sin and the person becomes cure from diseases. Those who desire overnight stay in this place, all their desires become fulfilled by the Sun god. Those who die in this land get into the Jyotirloka. A visit to the Sun god on a Sunday makes the person to live in the house of Sun.

In later ages the five supreme Gods worshipped by Hindu were Ganesh (destroyer of obstacles and fulfiller of desires), Vishnu (the cosmic sustainer of the phenomena universe), Siva (the cosmic destroyer of the universe), Durga (the mother goddess and source of all energies), and the Sun (the life giving energy). They are called Pancha-Devata. In Orissa there are five different kshetras or religious centers celebrated for these Pancha Devata, which are:

It was dedicated to the Sun-God (Arka) popularly called  Biranchi-Narayan, and the tract in which it is situated was known as Arka-Kshetra as well as padma-kshetra. Among the five great religious zones or Kshetra which were located in Orissa, Konark was considered to be one, the other four being Puri, Bhubaneswar, Mahavinayak, and Jajpur. There are a number of smaller shrines situated in the neighbourhood of the sun temple.In them are found Rameswar,Chitreswara,Tribeniswara,and Utpaleswar, all Siva-lingas and Ramachandi Rudrani,Khileswari,Charchika and Chitreswari,various forms of goddes Durga.Legends embodied in the Kapila samhita, the Madala Panji, and the Prachi-mahatmya, take the sanctity of Konark back to mythical times.The legends of these late texts are an obvious adaptation of a much earlier tradition as recorded in the Bhavisya  Purana and the Samba Purana.

According to mythology, Samba, son of Lord Krishna was smitten with leprosy due to the curse of Lord Krishna. Samba underwent severe penance for twelve years at Mitravana near the confluence of Chandrabhaga River with the sea at Konark and ultimately succeeded in pleasing the God Surya, the healer of all skin diseases and was cured of his illness. In gratitude, he decided to erect a temple in the honour of Surya. The day following his cure, while Samba was bathing in the Chandrabhaga he discovered an image of the God, which had been fashioned out of Surya’s body by Viswakarma. Samba installed this image in a temple built by him in Mitravana, where he propitiated the God. Since then throughout the ages this place has been regarded as sacred.

A shallow pool of water is known as the Chandrabhaga, where even now crowds of pilgrims take a purificatory bath before sun rise on the seventh day of the bright half of the month of Magha (January-February).A fair also takes place on this occasion. Once in the year the deserted holy place of Surya thus throbs with religious emotion. This is likely a survival of an ancient practice following the construction of the temple. Magha-Saptami is mentioned in the Madala Panji as one of the festival of this holy centre. It is also referred to the Brahma Purnima in connection with the description of Konark.

As the legend says that, King Narasimha Deva-I of the Ganga Dynasty had ordered this temple to be built as a royal proclamation of the political supremacy of his dynasty. A workforce of 12 hundred artisans and architects invested their creative talent, energy and artistic commitment for an exhausting period of 12 years. The king had already spent an amount equivalent to the state’s revenue receipts of 12 years. However the completion of the construction was nowhere near sight. Then the king issued a final command that the work be completed by a stipulated date. The team of architects headed by Bisu Maharana was at its wit’s end.

It was then that Dharmapada, the 12 year old son of the chief architect Bisu Maharana arrived there as a visiting onlooker. He became aware of the anxiety looming large among the architects. Although he did not have any practical experience of temple construction, he was thorough in his study of the theories of temple architecture. He offered to solve the confounding problem of fixing the last copping stone at the top of the temple. He surprised everyone by doing that himself. But soon after this achievement the dead body of this adolescent prodigy was found on the sea beach at the foot of the temple. Legend says that Dharmapada laid down his life to save his community.

A huge stone containing nine planetary gods is called as Navagraha slab. The architectural use of Navagraha is according to the medieval convention a kind of prophylactic measure for the safety of the temple and can be seen almost in every temple in Orissa. The Sun temple also has a huge Navagraha slab richly ornamented, placed over the front door of the Mukhasala (Jagamohan), at a height of about 18 feet. This huge stone made up of chlorite had 19′.10” (6.045 m) length, 4′.9” (1.45 m) breadth and 3′.9” (1.43 m) height. Originally it weighted 26.27 tons.

In carving out the images their attributes are not correctly attended to. They are made mostly alike in form, except a few in the group. Most of them hold rosary and Kamandalu in their hands, wearing high pointed crowns and sitting on lotuses, whereas the descriptions in the Puranas symbolize as follows:

However the cruel hands of time did not permit the slab to remain in its original position for long. Towards the end of the 19th century the Government of Bengal at the instance of the Bengal Asiatic Society, opening a Tram line up to the sea beach tried to take the Navagrah slab to Calcutta. But no sooner they took it hardly 200 feet (60m) all the sanctioned money was exhausted. Again after some years they tried to take it. To facilitate the removal the slab was longitudinally cut into two pieces. But its heaviness even after cutting and the sandy track all around saved it from being taken away. It was subsequently left at distance of about two furlongs from the temple site, where it was lying for more than sixty years. Very recently the Government of India arranged for its installation in a separated shed, close to the temple compound. Now the bigger part of the Navagraha slab lies in the south-eastern corner outside the compound.

On each and every Sankrati and Saturday many people gather at Konark to worship the Navagraha to offer Bhoga and perform Homa.