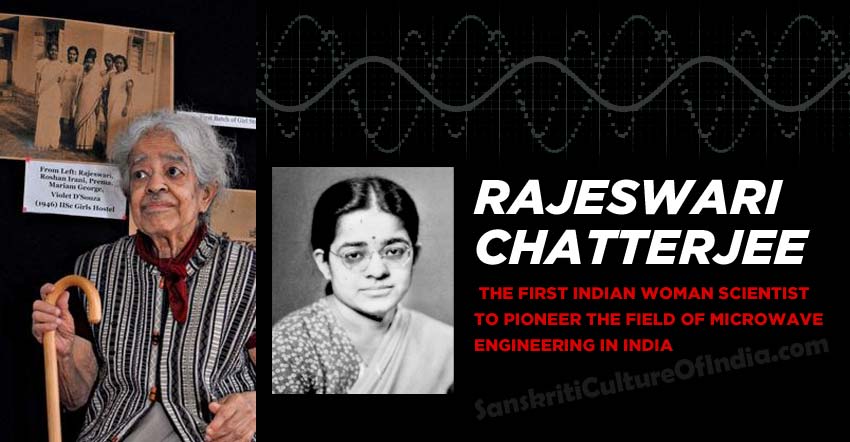 Professor Rajeswari Chatterjee lived a fulfilled life as reflected in her own words “Lucky to be where I am” in her biography. Brilliant in studies, professionally accomplished, sharp in intellect and memory, courageous and forthright in expressing views coupled with a kind personality having deep concern for societal issues such as caste discrimination and women’s education, her life spanning Jan.1922 to Sept. 2010, stands tall to inspire, particularly young women scientists and engineers.

Rajeswari had her early education in a “Special English School” set up by her grandmother, Kamalamma Dasappa, in the ‘Mahila Seva Samaj’ in Basavanagudi, Bangalore. Kamalamma was one of the very first women graduates in the erstwhile Mysore State and had played a pioneering role in social reform and for the emancipation of women. Growing up in a well-educated, broad-minded family environment, with her grandmother around as a catalytic agent and an inspiring model, Rajeswari, born intelligent, perhaps imbibed courage and forward-looking spirit that lasted throughout her life.

Rajeswari joined the Central College, Bangalore, in 1939 where she received her B.Sc (Hons) and M.Sc degrees in Mathematics and Physics, both with first rank in Mysore University. She was awarded the Mummadi Krishnaraja Wodeyar Award for securing first rank in B.Sc (Hons), the M.T. Narayana Iyengar Prize and the Walters Memorial Prize for obtaining first rank in M.Sc. After completing her M.Sc in 1943, she joined the Indian Institute of Science (IISc), Bangalore as a Research Student in the then Electrical Technology Department in the area of Communication.

During 1945-1947, there was an interim Government in Delhi to transfer power from the British to the Indians. This Government had announced scholarships to bright young Indians to pursue higher studies abroad. In 1946, Rajeswari was selected for that scholarship in the field of ‘Electronics and its applications’. With this, she got admission to the University of Michigan in Ann Arbor, USA. Those days, when there were many restrictions on girls wanting to pursue higher studies, both in India and abroad, Rajeswari was determined. With indomitable courage, she set out on a long voyage in July 1947, by sea via Singapore which took 30 days to reach the U.S.A. At Michigan, she completed her Master’s degree from the Department of Electrical Engineering. Then, following the agreement with the Government of India, she underwent practical training for eight months in the Division of Radio Frequency Measurements at the National Bureau of Standards in Washington D.C. In 1949, Rajeswari went back to Michigan to continue her studies leading to a Ph.D degree. With Professor William G. Dow, an authority in Electronics and Electrical Engineering those days as her thesis advisor, she completed her Ph.D early 1953 and returned to India soon thereafter.

On returning to India, she joined the Department of Electrical Communication Engineering at IISc as a faculty member. The same year, she married Sisir Kumar Chatterjee who was already on the faculty of the same department and whom she had known for some years. Soon, she came to be known as Mrs Chatterjee, rather than Dr Rajeswari Chatterjee! She was the only woman on the faculty of IISc and it was no smooth-sailing for her. She, along with S. K. Chatterjee, initiated teaching and research in the area of Microwave Engineering, for the first time in India. With total dedication and the limited resources available at that time, they built up a Microwave Laboratory for experimental research in the area. Several research students joined and closely worked with them, received valuable hands-on experience in the laboratory. To the students, they were not just research supervisors, but mentors who cared for them.

Rajeswari, subsequently became a Professor and also held the position of Chairman in the Department of Electrical Communication Engineering. Besides teaching electromagnetic theory, electron tube circuits and microwave technology, she was very active in research. She guided 20 Ph.D students, published over 100 research papers and seven books in Microwave Engineering and Antennas. Her major contribution has been in the field of antennas, mainly for aircraft and spacecraft applications. For her contributions to Microwaves, she received several awards and honours. These include the Lord Mountbatten prize for the best paper from the Institute of Electrical and Radio Engineering, (UK), the J.C Bose Memorial prize for the best research paper from the Institution of Engineers, and the Ramlal Wadhwa Award for the best research and teaching work from the Institute of Electronics and Telecommunication Engineers. She was also a Fellow of several professional engineering societies. She retired as Professor in 1982.

Over the three decades of her career at IISc, Rajeswari distinguished herself not only for her research contributions, but also as a considerate and caring teacher. Students could easily approach her even for their personal problems and for help. For young women students, she was a role model, an inspiration to march ahead in profession in absolute simplicity.

Besides science and engineering, Rajeswari had interest in history and on many issues concerning society. After retiring from IISc, she started working in social programmes, mainly with the Indian Association for Women’s Studies. She addressed issues of caste and gender discrimination, particularly concerning women from poor financial background. In her book ‘A Thousand Streams – A Personal History’ published in 2003 by the Bharatiya Vidya Bhavan, she presented her personal reminiscences interspersed with historical events of those times with such clarity bringing out her interest in history and her phenomenal memory.

Rajeswari is survived by a daughter, Indira Chatterjee, presently a Professor of Electrical and Bio-medical Engineering at the University of Nevada, Reno, USA.