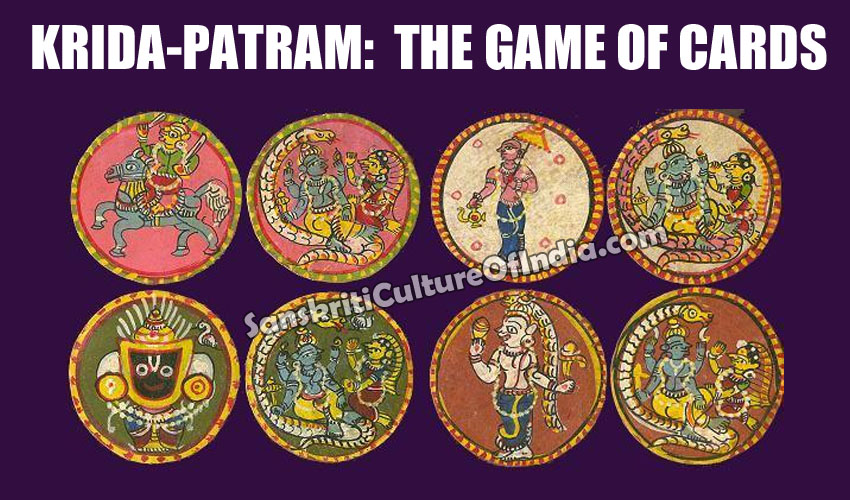 The popular game of cards originated in ancient India and was known as Krida-patram. It was one of the favorite pastimes of Indians in ancient times. This game was patronized especially by the royalty and nobility. In medieval India, playing cards was known as Ganjifa cards which were played in practically all royal courts. This game is recorded to have been played in Rajputana, Kashyapa Meru (Kashmir), Utkala (Orissa) the Deccan and even in Nepal. The Mughals also patronized this game, but the Mughal card-sets differed from those of the ancient Indian royal courts.

According to Abul Fazal’s (author of the Ain-e-Akbari) description of the game, the following cards were used. The first was Ashvapati which means ‘lord of horses’. The Ashvapati which was the highest card in, the pack represented the picture of the king on horseback. The second highest card represented a General (Senapati) on horseback. After this card come ten other with pictures of horses from one to ten.

On the authority of Abul Fazal we can say that the game of playing cards had been invented by sages in ancient times who took the number 12 as the basis and made a set of 12 cards. Every king had 11 followers, thus a pack had 144 cards. The Mughals retained 12 sets having 96 cards. These Mughal Ganjifa sets have representations of diverse trades like Nakkash painter, Mujallid book binder, Rangrez, dyer, etc., In addition there were also the Padishah-i-Qimash, king of the manufacturers and Padishah-izar-i-Safid, king of silver, etc.

Cards were known as Krida-patram in ancient India. These cards were made of cloth and depicted motifs from the Ramayana, Mahabharata, etc. A tradition carried on today with floral motifs and natural scenery.

The pre-Mughal origin of the game of cards is evident if we examine the pattern of painting the cards. We also find that despite the observation of Abul Fazal that Akbar introduced the pack with 8 sets, we find that even earlier, in Indian (Hindu) courts we have packs with 8, 9 and 10 sets apart from the usual 12. The numbers were derived from the eight cardinal directions Ashtadikpala, for the pack with 8 set, from the nine planets Navagraha for the one with 9 sets and from ten incarnations Dashavatara of Vishnu for the pack with 10 sets.

Themes from the Ramayana and Mahabharata are painted on these cards. The largest number of such cards are to be found in Orissa. The painters from Orissa have represented various illustrations like the Navagunjara, a mythical birdhuman animal which was the form assumed by Sri Krishna to test Arjuna’s fidelity, illustrations from the Dashavatata of Vishnu are also portrayed.

All these cards were hand-made and were painted in the traditional style. This required considerable patience and hard meticulous work. The kings usually commissioned painters to make cards as per their preference. The commoners got their cards made by local artists who were to be ; found in urban and rural areas. In order to -obtain the required thickness a number of sheets of pieces of cloth were glued together. The outlines of the rim were painted in black and then the figures were filled with colors.

As cards were played by members all strata of society we find different types of cards. Some cards were also made of ivory, tortoise shell, mother of pearl, inlaid or enameled with precious metals. The cards were of different shapes; they were circular, oval rectangular, but the circular cards were more common. The cards were usually kept in a wooden box with a lid painted with mythological figures. This art of handmade, hand painted cards which had survived for hundreds of years. gradually feel into decay and became extinct with the introduction of printed paper cards by the Europeans in the 17-18th centuries. With the extinction of the art of making and painting cards also was erased the memory that Indians ever had played the game of cards with their own specific representations of the Narapati, Gajapati and Ashvapati.