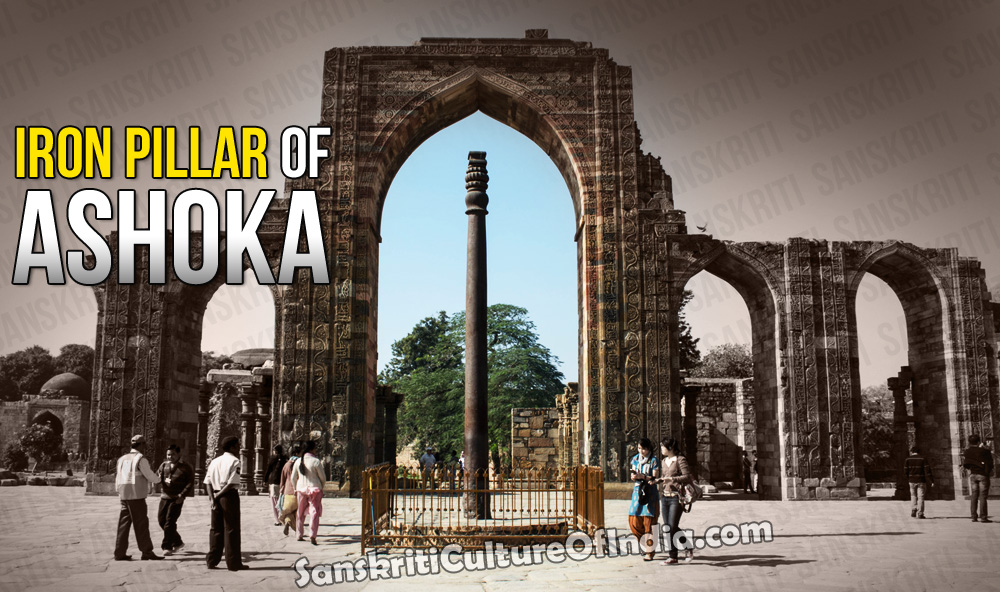 An iron pillar weighing over 6 tonnes, more than 7 metres tall is constructed in a single forge and is erected on top of the Vishnupada hill (somewhere in modern central India) with Sanskrit inscriptions on it in the Brahmi script about the great Gupta ruler Chandragupta Vikramaditya.

Later the founder of Delhi, Tomar king Anangapala brings it to Delhi and installs it in its current place.

Much later, in the modern days, historians discover Ashoka’s pillars (The great Mauryan ruler of ancient India) and learn about the Brahmi script in which Ashoka’s inscriptions have been written. The script on the Delhi iron pillar is then identified to be written in the same Brahmi script.

What’s so wonderful about it? Well, one should ask what’s so mysterious about it?

To build an iron pillar of this huge size in a single forge more than 1600 years ago itself is an indication of the advanced metallurgy of the ancient Indians. Even in today’s modern technological world it is a great achievement to forge such a huge pillar in a single forge!!!

Modern day technology uses limestone in the blast furnaces which carries away most of the phosphorus content in the ore in the form of slag. Ancient Indians instead by solid state reduction used charcoal as a reducing agent to extract pure iron with low carbon content from the ore.

One of the research opinions about the iron pillar’s corrosion resistant nature is that the high amount of phosphorous (which is 1% of the pillar as opposed to modern day proportions which is 0.05%) has formed a thin protective layer on the surface of the pillar thereby making it corrosion proof. Since other ancient iron works of the same period do not contain such a high quantity of phosphorous, it indicates that the extra phosphorous was intentionally added to the iron pillar.

Another theory suggests that the relative low humidity of Delhi ensures that the Iron pillar does not corrode. But It was strongly disagreed with this theory and want to stress on the fact that it is not the climate of Delhi but the composition of the pillar which is responsible for the corrosion resistant nature of the pillar. This is because of a simple reason that I observed a similar ancient corrosion resistant Iron pillar when I had been on a trek to the Kodachadri hills in the west coast of South India. Also I have heard about a similar corrosion resistant Iron pillar in the Konark temple of Orissa. Both the above mentioned places have a highly humid climate throughout the year and yet the iron pillars here are corrosion resistant! The spreadout of these pillars across the geographical landscape of India indicates that the Iron pillar of Delhi was not a single isolated incident of an ancient genius but was a common technical knowledge of the ancient civilization in this country.

The inscriptions on the pillar identify the king as “Chandra” (which most historians have related to the great Gupta ruler Chandragupta Vikramaditya) reads as follows (Source Wikipedia):

He, on whose arm fame was inscribed by the sword, when, in battle in the Vanga countries, he kneaded (and turned) back with (his) breast the enemies who, uniting together, came against (him);-he, by whom, having crossed in warfare the seven mouths of the (river) Sindhu, the Vahlikas were conquered;-he, by the breezes of whose prowess the southern ocean is even still perfumed;-

(Line 3.)-He, the remnant of the great zeal of whose energy, which utterly destroyed (his) enemies, like (the remnant of the great glowing heat) of a burned-out fire in a great forest, even now leaves not the earth; though he, the king, as if wearied, has quitted this earth, and has gone to the other world, moving in (bodily) form to the land (of paradise) won by (the merit of has) actions, (but) remaining on (this) earth by (the memory of his) fame;-

(L. 5.)-By him, the king,-who attained sole supreme sovereignty in the world, acquired by his own arm and (enjoyed) for a very long time; (and) who, having the name of Chandra, carried a beauty of countenance like (the beauty of) the full-moon,-having in faith fixed his mind upon (the god) Vishnu, this lofty standard of the divine Vishnu was set up on the hill (called) Vishnupada.

This pillar was erected in the honour of the Hindu god Vishnu who is one of the Trimurti (Three gods who represent the life cycle of the Universe: Brahma-The Creator, Vishnu-The Maintainer, Shiva-The Destroyer)

It is also interesting to note that  ancient Indians knew about the process of iron rusting more than 2300 years ago! “Buddha” is cited in the ancient buddhist book Dharmapada saying:

As rust, sprung from iron, eats itself away when arisen, even so his own deeds lead the transgressor to states of woe.