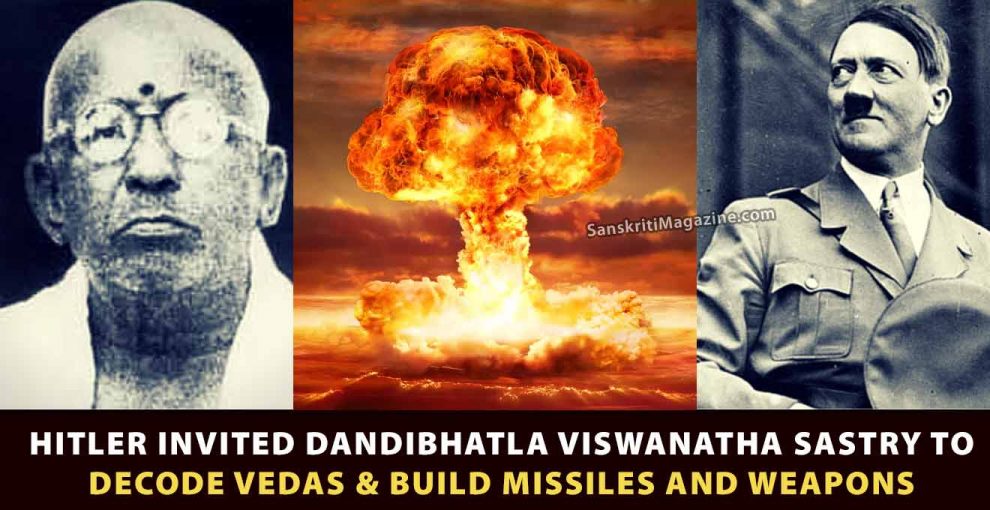 One of the greatest vyakarana shastra and veda pandit of Andhra Pradesh, India was Brahmasri Dandibhatla Vishwanatha Sastry from Rajahmundry.

He was invited by few German scientists who worked for Hitler to decode sanskrit hymns in Yajur Veda and Atharva Veda during 1938.

This was done to design War Missiles before World War II.

Viswanatha Sastry was a child prodigy who studied tarka (logic), vyakarana (grammer), mimamsa (dilemma) and mastered the entire Yajurveda karma kANDa bhAga and atharveda mantra prayoga bhAga (application part). His portrait is still hung on a wall at a University in Frankfurt, Germany.

In 1938, he was summoned to Germany to help in decoding the rahasya mantras which were used for Missile Technology in World War by Germans.

It is interesting to note, that the Nazis developed the first practical pulse-jet engines for their V-8 rocket “buzz bombs.”

Hitler and his Nazi staff were exceptionally interested in ancient India and Tibet and sent expeditions to both these places yearly, starting in the 1930’s, in order to gather esoteric evidence that they did so, and perhaps it was from these people that the Nazis gained some of their scientific information.

Only a few years ago, the Chinese discovered some sanskrit documents in Lhasa, Tibet and sent them to the University of Chandrigarh to be translated. These documents contain directions for building interstellar spaceships!

Their method of propulsion, she said, was “anti- gravitational” and was based upon a system analogous to that of “laghima,” the unknown power of the ego existing in man’s physiological makeup, “a centrifugal force strong enough to counteract all gravitational pull.”

According to Ashta Siddis, it is this “laghima” which enables a person to levitate. (This was shown in recent hollywood movie ‘Ant Man‘ ).

These machines, which were called “Astras” by the text, the ancient Indians could have sent a detachment of men onto any planet, according to the document, which is thought to be thousands of years old. The manuscripts were also said to reveal the secret of “antima”; “the cap of invisibility” and “garima”; “how to become as heavy as a mountain of lead (used by Hanuman in Ramayana to cross ocean and reach Lanka).”

Naturally, Indian scientists did not take the texts very seriously, but then became more positive about the value of them when the Chinese announced that they were including certain parts of the data for study in their space program!

This was one of the first instances of a government admitting to be researching anti-gravity.

PS: Due to the secrecy of covert operations during WW2 not much details are divulged.

The Legend and Destruction of Martand, The Sun Temple in Kashmir
Philippines – A Tamil Hindu Colony
Comment