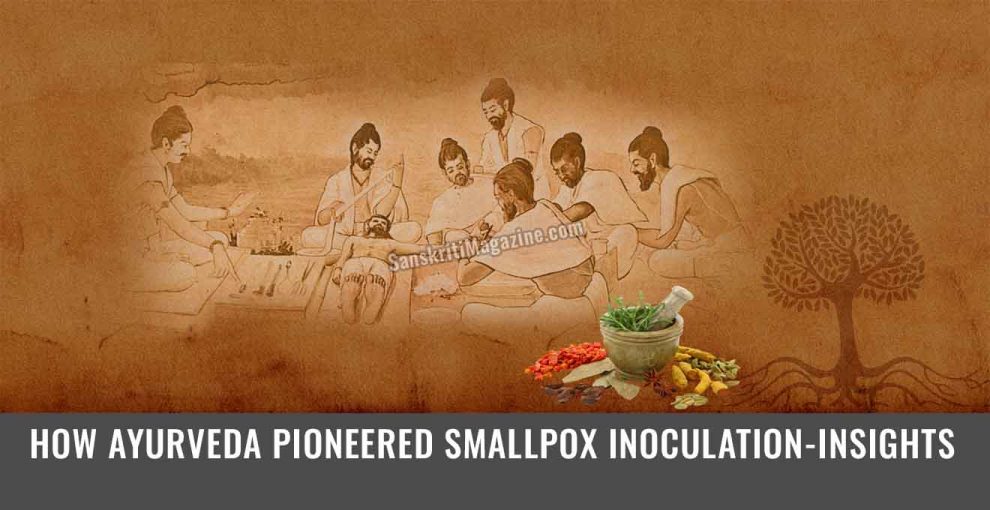 An interesting insight on the ayurvedic treatment of smallpoxes which preceded the germ theory of disease that arose in the nineteenth century.

The first reliable account of inoculation is found in the eighteenth-century reports by British doctors concerning the Indian treatment of smallpox. In the method, believed to have been discovered sometime before AD 1000 in India (Henderson and Moss 1999), one deliberately inoculated, either into the skin or by nasal insufflation, scabs, or pustular material from lesions of patients. This resulted in an infection that was unusually less severe than an infection acquired naturally. From India, the practice spread to China, western Asia, and Africa and finally, in the early eighteenth century, to Europe and North America.

It appears that the idea of inoculation derived from both agada-tantra, one of the eight branches of traditional Ayurveda (Indian medicine) that deals with poisons and toxins in small dosages, and from the application of specific concoctions to punctures in the skin for treatment of certain skin diseases (Susruta Samhita in Cikitsasthana 9.10). The Caraka Samhita speaks of how deadly poisons can be antagonistic to each other. The Samhitas speak of organisms that circulate in the blood, mucus, and phlegm. In particular, the organisms in the blood that cause disease are said to be invisible.

Chapter 54 of Uttaratantra or Kayacikitsatantra (General Medicine), suggests a treatment regimen that includes avoidance of fatty foods and sweets. In Chapter 5 of  Nidanasthana (Diagnosis), it is indicated that physical contact and sharing the same air can cause such diseases to spread. Later in Chapter 13 mentions the eruptive boils of the disease masurika. It appears that it originally meant chicken pox, but by twelfth century the term was also being used for smallpox, as in the case of the commentator Dalhana.

The best source concerning the Indian method of treatment of smallpox is a report by Dr. John Z. Holwell in 1767 for the College of Physicians in London. This report is an excellent source for understanding the mind of the Ayurvedic doctors of the eighteenth century. Holwell says that inocualtors-

….are delegated for this service from the different Colleges of Bindoobund [Vrindavan], Eleabas [Allahabad], Banaras, &c. over all the distant provinces; diving themselves into small parties, of three or four each, they plan their traveling circuits in such wise as to arrive at the places of their respective destination some weeks before the usual return of the disease (Holwell 1971: 150-151).

One would presume that they were Ayurvedic vaidyas or their assistants-

They inoculate indifferently on any part, but if left to their choice, they prefer the outside of the arm midway between the wrist and the elbow, for the males; and the same between the elbow and the shoulder for the females. Previous to the operation the Operator takes a piece of cloth in his hand, (which becomes his prerequisite if the family is opulent) and with it gives a dry friction upon the part intended for inoculation, for the space of eight or ten minutes, then with a small instrument he wounds, by many slight touches, about the compass of a silver groat, just making the smallest appearance of blood, then opening a linen double rag (which he always keeps in a cloth round his waist) takes from thence a small pledget of cotton charged with the variolous [smallpox] matter, which he moistens with two or three drops of the Ganges water, and applies it on the wound, fixing it on with a slight bandage, and ordering it to remain on for six hours without being moves, then the bandage to be taken off, and the pledget to remain until it falls off itself…The cotton whichhe preserves in a double callico rag, is saturatedwith matter from the inoculated pustules of thepreceding year, for they never inoculate with freshmatter, nor with matter from the disease caughtin the natural way, however distinct and mild the species.

The patient was to abstain from fish, milk, and ghee before and after inoculation for a period of one month. Holwell claimed that when the inoculation regime was strictly followed, it was next to a miracle to hear that it “failed in one in a million.” He added that since-

…this practice of the East has been followed without variation, and with uniform success from the remotest known times, it is but justice to conclude, it must have been originally founded on the basis of rational principles and experiment.

This is how Holwell described the explanations offered to him by Ayurvedic vaidyas:

The immediate (or instant) cause of the smallpox exists in the mortal part of every human or animal form; that the mediate (or second) acting cause,which stirs up the first, and throws it into a state of fermentation, is multitudes of imperceptible animalculae [microorganisms] floating in the atmosphere; that these are the cause of all epidemical diseases, but more particularly of the smallpox; that they return at particular seasons in greater or lesser numbers… That these animalculae touch and adhere to everything, in greater or lesser proportions, according to the nature of the surfaces they encounter; that they pass and repass in and out of the bodies of all animals in the act of respiration, without injury to themselves… smallpox is more or less epidemical, more mild or malignant, in proportion as the air ischarged with the animalculae, and the quantity of them received with the food (Holwell 1767:155-156)

Holwell understood the idea behind inoculation in this manner:

That when once this peculiar ferment, which produces the smallpox, is raised in the blood, the immediate (instant) cause of the disease is totally expelled in the eruptions, or by other channels; and hence it is, that the blood is not susceptible of a second fermentation of the same kind.

In other words, he believed that when the disease in its natural form or when introduced in its weak form by the inoculation had runs its course, the patient was safe. The difference between these two forms was that in its natural course it is often fatal, whereas when introduced through inoculation, it was only an inconvenience. It is significant that the spread of disease was taken to be caused by the imperceptible animalculae (microorganisms). This old insight of the Ayurvedic Samhitas was a forerunner to the germ theory of disease that arose in the nineteenth century.

First published in the Encyclopaedia of the History of Science, Technology, and Medicine in Non-Western Cultures by Helaine Selin, published by Springer Science & Business Media.

About the Author:
Subhash Kak is Regents professor of electrical and computer engineering at Oklahoma State University and a vedic scholar.
Source : Article Published in swarajyamag.com