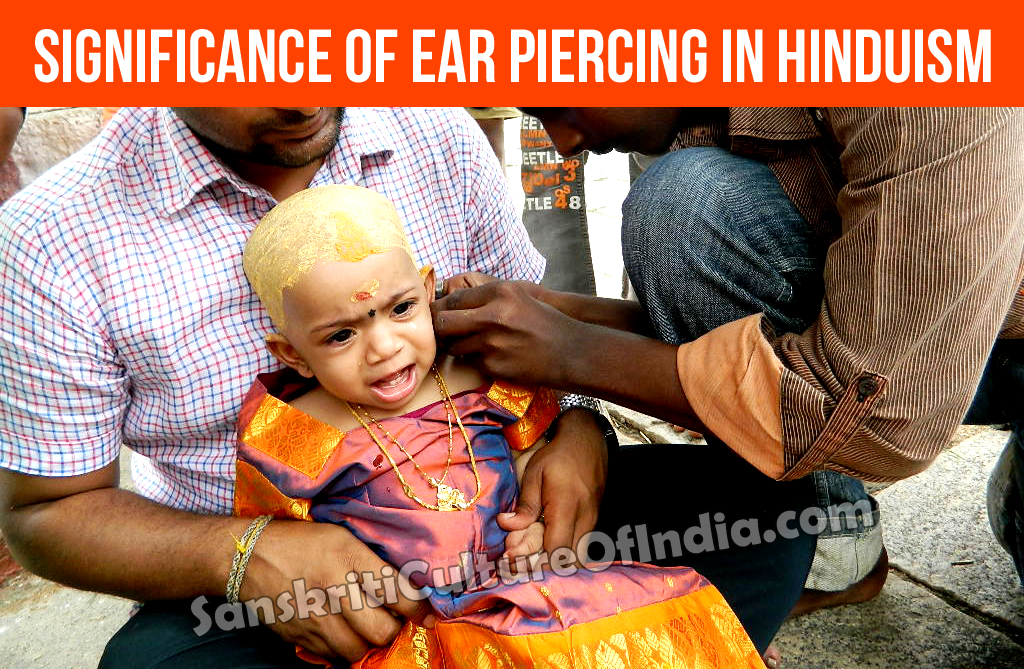 Ear lobe piercing, known as Karnvedh Sanskar, is considered an important ceremony in many Hindu traditions. There is no unanimity regarding the year to perform ear piercing on a Hindu girl child. It is usually performed during the sixth month or seventh month or third year or fifth year or 7th year after birth. An auspicious day and auspicious time is chosen for performing the ear piercing ceremony. Special pujas and prayer is done and the ceremony is done under sunlight. Earrings are then offered to the child.

According Hindu scriptures like Dharma Sindhu, Karna Vedha Sanksar must be performed on the 10th, 12th or 16th day after birth of the child. But most people avoid this calculation. They perform it during the 6th or 7th month after birth.

The ear piercing in some regions is performed by the Goldsmith and he uses gold needles to pierce the earlobe. Gold never rusts and this is the reason for using gold needles.

Today, many people also perform the ear piercing under the guidance of a doctor

Nose stud or ring is worn by both married and unmarried Hindu women. The significance of the nose stud varies from region to region. As in several other rituals, there is no written code in Hinduism regarding the wearing of nose ring or nose piercing. In certain Hindu sects, a nose ring is referred as ‘Nath’ is worn during marriage and is a symbol of married woman. There are several communities in Hindu religion which does not perform nose piercing.

Nostril piercing is a body piercing practice often associated with India and Nepal. In India the outside of the left is the preferred position of the piercing as this is supposed to make childbirth easier. This is because Ayurvedic medicine associates this location with the female reproductive organs. In India piercings were regarded as a mark of beauty and social standing as well as a Hindu’s honor to Parvathi the goddess of marriage in the 16th century. Nose piercing is still popular in India

Nowadays, some Hindu women see nose stud as part of modern day trendy fashion jewelry. Some are also fighting against wearing of nose rings which act as an impediment in their daily activities.

Seven Steps of Wedding Ceremony Explained
Why we don’t touch books and people with feet?
Comment