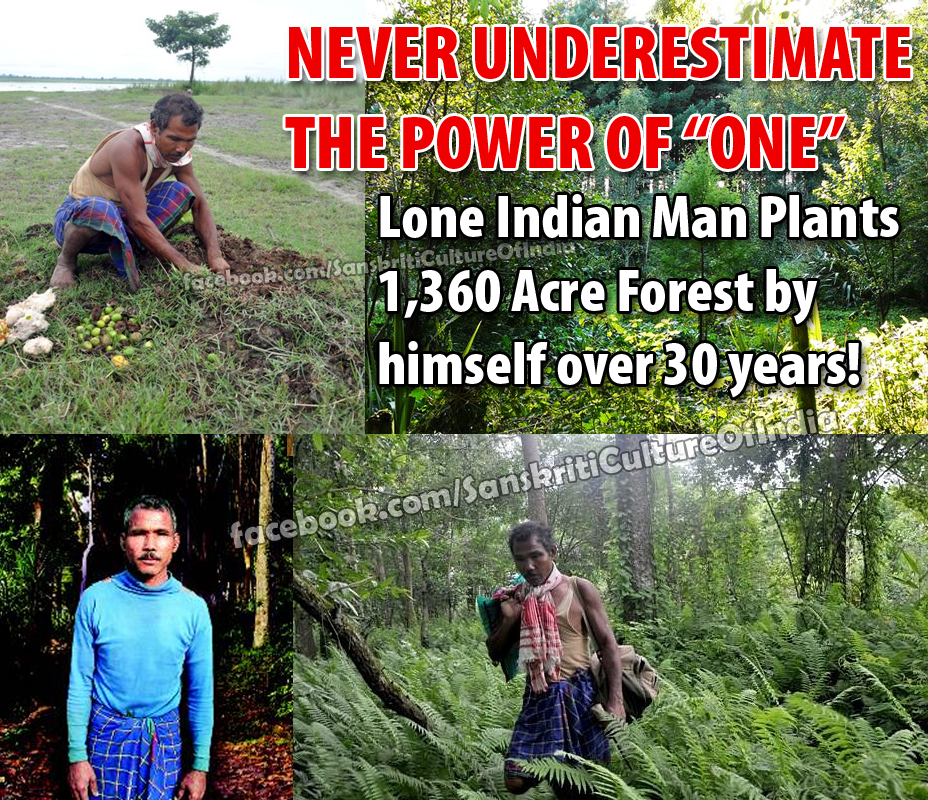 A little over 30 years ago, a teenager named Jadav “Molai” Payeng began burying seeds along a barren sandbar near his birthplace in north eastern India’s Assam region to grow a refuge for wildlife. Not long after, he decided to dedicate his life to this endeavor, so he moved to the site where he could work full-time creating a lush new forest ecosystem. Incredibly, the spot today hosts a sprawling 1,360 acre of jungle that Payeng planted single-handedly.

It all started way back in 1979 when floods washed a large number of snakes ashore on the sandbar. One day, after the waters had receded, Payeng , only 16 then, found the place dotted with the dead reptiles. That was the turning point of his life.

“The snakes died in the heat, without any tree cover. I sat down and wept over their lifeless forms. It was carnage. I alerted the forest department and asked them if they could grow trees there. They said nothing would grow there. Instead, they asked me to try growing bamboo. It was painful, but I did it. There was nobody to help me. Nobody was interested,” says Payeng, now 47.

While it’s taken years for Payeng’s remarkable dedication to planting to receive some well-deserved recognition internationally, it didn’t take long for wildlife in the region to benefit from the manufactured forest. Demonstrating a keen understanding of ecological balance, Payeng even transplanted ants to his burgeoning ecosystem to bolster its natural harmony. Soon the shadeless sandbar was transformed into a self-functioning environment where a menagerie of creatures could dwell. The forest, called the Molai woods, now serves as a safe haven for numerous birds, deers, rhinos, tigers, and elephants — species increasingly at risk from habitat loss elsewhere.

Despite the conspicuousness of Payeng’s project, Forestry officials in the region first learned of this new forest in 2008 — and since then they’ve come to recognize his efforts as truly remarkable, but perhaps not enough.

“We’re amazed at Payeng,” says Assistant Conservator of Forests, Gunin Saikia. “He has been at it for 30 years. Had he been in any other country, he would have been made a hero.”

Who wrote the Vedas and Upanishads?

Are we are promoting “symbolism and double standards” ?
Self-Discipline
Comment