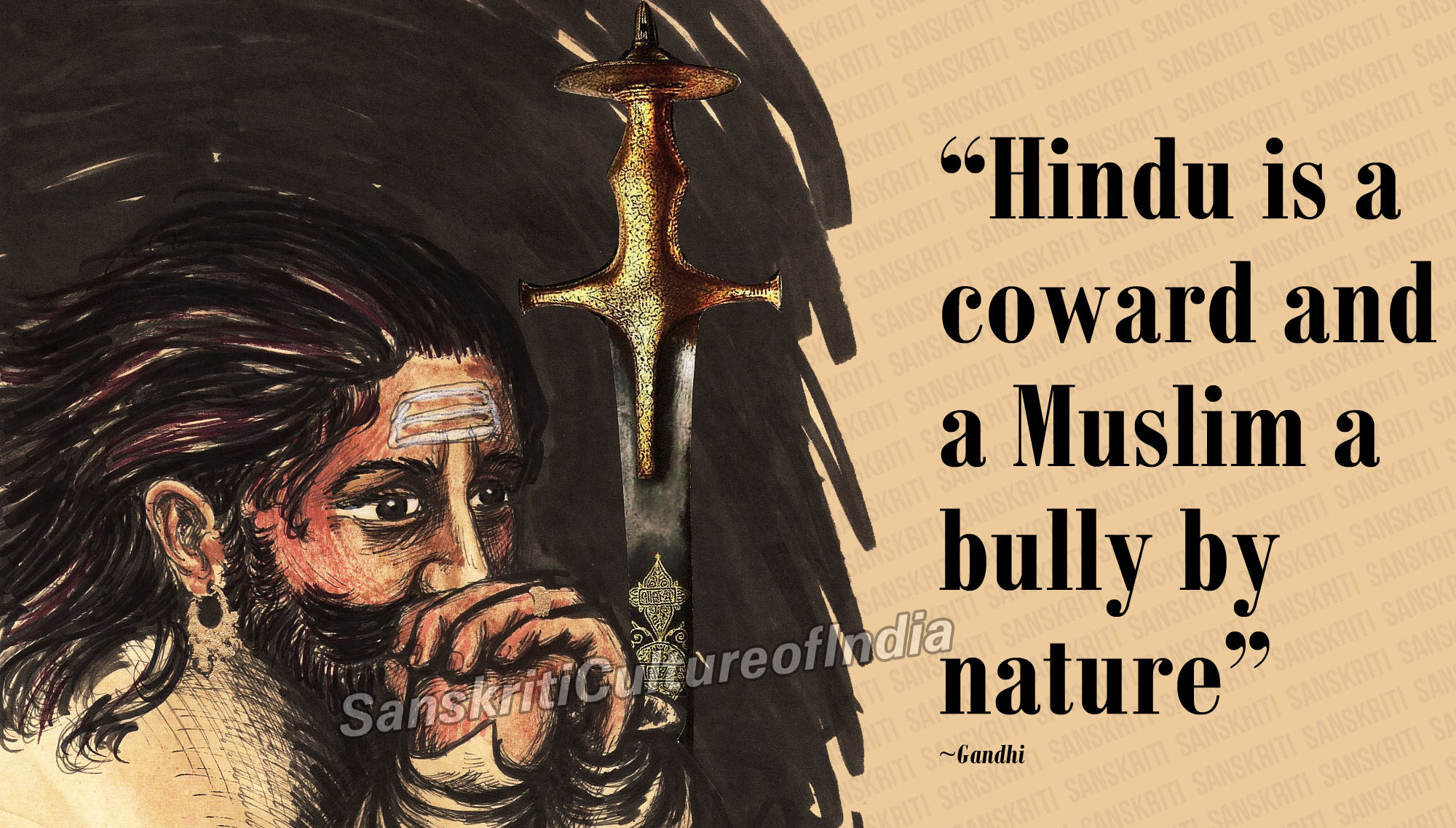 There is common perception that Hindus are cowards and Muslims are brave. Even Mahamta Gandhi went on to write: “Hindu is a coward and a Muslim a bully by nature.”

This perception mostly results from the fact that a handful of barbaric Muslim invaders were able to defeat the Hindus and rule over them for centuries.

If one were to analyze the underlying causes that led to the defeat of the Hindus, there is no evidence to suggest that the Hindu is coward — Hindus just have different ideology — a different set of priorities and ideas about nature of things.

Hindu defeats were more intellectual and cultural. Muslims brought a new ideology and a new kind of warfare to India — one that at first the Hindus did not understand. And today when they fully understand it, they are not willing to adopt it.

The Hindu mind regarding “religious” warfare was first expressed by none else than Alberuni, a scholar in Greek, Farsi and Arabic and an astronomer in his own right, who came to India with Mahmud Ghaznavi, stayed in India, learnt Sanskrit, read extensively all Hindu literature, wrote 20 books including translations on India. In his still available book Indica, he went on to observe:

“On the whole, there is very little disputing about theological topics among themselves; at the utmost they fight with words, but they will never stake their soul or body or their property on religious controversy.”

Hindus believed in open discussion of theological topics but did not kill each other for their opinions and they could not understand why would one kill others for differing on matter of theology or imposing their own ideas on others.

Almost thousand years later, talking of the betrayal of king Dahir of Debal, V S Naipaul went on to explain the Hindus’ reaction to Muslim invasions in the following words:

“It is the first of the betrayals that will assist the Arab conquest. But they are not betrayals, really. They are no more than the actions of people who understand only that power is power, and believe they are changing rulers; they cannot conceive that a new way is about to come.”

Hindu kings, before Islam, fought incessantly but it made no difference to general public — they were not asked to change their religion, their women were not raped, their temples and cities were not plundered and desecrated. The war did not touch their personal lives. All they got was another king.

A new way did dawn upon India after the conquest of Muhammad bin Kasim but the cultural moorings of Hindu were so strong that they refused to learn the new ways of Islam. That would have meant giving up Hinduism. While civilizations of Arabia, Egypt, Anatolia, Mesopotamia, Iran and others crumbled before the Islamic onslaught, Hindus withstood it for centuries. Had the Hindus been cowards, India today would have been a purely Islamic state. They refused to be annihilated and were not desirous of annihilating even the aggressor. Religious warfare, as Alberuni observed, has no place in their ideology.

It is not Hindus lack of understanding of these new ways even after almost 1300 years and even when Hindus were massacred in Pakistan, they failed to retaliate in India. Even today after all the massacres of Hindus in Kashmir, the Hindus don’t want to fight in the name of religion. Secularism in India is not an empty slogan or mere cosmetic — it is the very basis of Hindu beliefs and that is why a common Hindu is still ashamed of Babri masjid demolition while a Muslim — of Hindu ancestry — has no qualms or shame of the destruction of tens of thousands of Hindu temples by Muslim invaders. The difference in behavior is nothing but the ideology that one follows — both have the same genetic pool in their blood stream.

It is not without reason that despite what has been visited upon the Hindus by the Muslims, Hindu India is still a secular country while there is not a single Muslim country that subscribes to the ideal of secularism. M J Akbar in his book The Siege within India admits that India is secular because it is a Hindu majority country.

As far as Hindu bravery is concerned — it is well documented in the annals of Muslim victors themselves — I need not go into details of that. It is the Hindu psyche that refuses to act contrary to their long held beliefs that killing in the name of religion is not the right thing to do.

The success of the Muslim invaders came not from their being a martial or superior race or being physically stronger — it were the same Arabs who had not done any “brave” acts other than trading in entire history before Islam — it was only after they took on the ideology of Islam that preached them to be cruel to all infidels and spread the “TRUE FAITH” that they went on the rampage. The Buddhist Afghans had lived with their Buddhist/Hindu neighbors for a millennium — it was only after they adopted the creed of Islam that they went on the rampage on those very people with whom they shared history and culture.

A study of the lives and teachings of Muhammad and Buddha, Mahavir and even Gandhi today will explain why the Muslims and the Hindus behave the way they do. Physically and genetically an Indian/Pakistani Muslim is no different from his Hindu compatriot — it is the ideology that one follows that makes the difference. It is the ideology that makes them act so differently from each other.

The Vedic “Ekam satya, viprah bahuda vadanti” — there is one truth but people call it by different names — is deeply engraved on and continues to control the Hindu mind and actions while the Koranic injunctions “Islam is the only true faith” and “Those who do not believe in Our revelations shall be inheritors of Hell” continue to guide the minds and lives of Muslims.