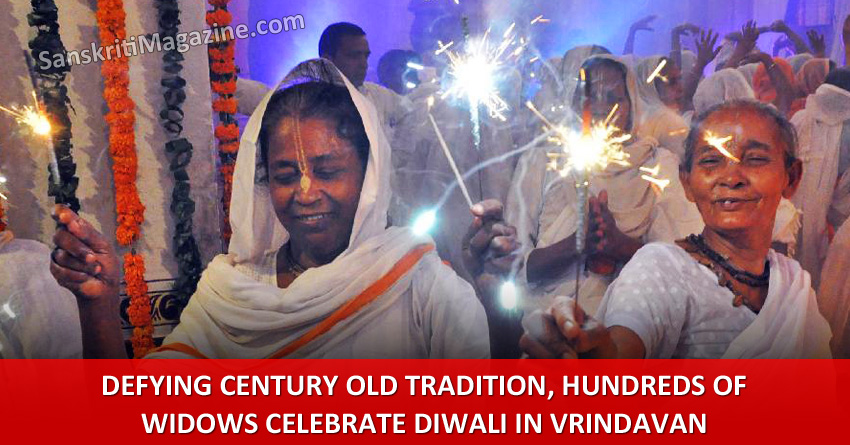 AGRA: As the early autumn sun begins to set on Tuesday, hundreds of widows, who have been abandoned by their families hold earthen oil lamps and offered prayers on the banks of Kesi Ghat of Vrindavan as part of Diwali celebrations. These widows who live in various ashrams run by the district administration and NGO’s in Vrindavan celebrated Diwali for the third consecutive year this time and claimed to continue with the tradition, for the rest of their lives.

Local residents cheered the women on as they passed through the lanes and bylanes of the temple-filled town. The elderly women loudly chanted the tune of ‘hare krishna’ and later, they lit earthen lamps prepared and painted by them and offered prayers on the riverbank on the eve of Diwali.

As hundreds of earthen lamps were released in the water, the river turned into a sheet of light emitting diyas. The widows than burset crackers on the river bank before heading back to their ashram to celebrate, some dancing late into the night.

In places like Varanasi and Vrindavan, hundreds of widows lead an isolated life to attain moksha or liberation from the cycle of death and rebirth. Living in small rooms in narrow alleys, they spend most of their time praying and looking for food, in the absence of family support. 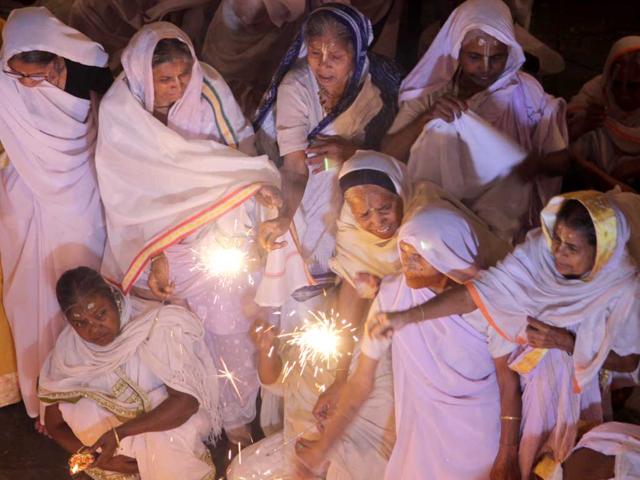 “We all were almost lost in the dark rooms of our ashrams since we were realized that we are not inauspicious or a curse. It’s great to celebrate Diwali. I am now waiting for next year’s Diwali,” said 96-year-old Manu Ghosh who came to the town after the deaths of her husband, leaving three sons behind, around three decades ago.

Almost 102-year-old Kanaklata, the oldest widow in Mera Sehbhagini Ashram of Vrindavan, who couldn’t even walk without wheelchair said that the lights, crackers and dancing reminded her of happier times with her family. ‘I never thought that I too would be able to celebrated Diwali ever again in this birth, after the death of my husband,” she added.

“With an aim to bring a ray of happiness at their twilight years, we have come up with this unique idea to organise the festival of lights specially for the widows. It is important to bring these widows, who are considered as inauspicious, back in the life again,” said Bindeshwar Pathak, founder of Sulabh Movement. 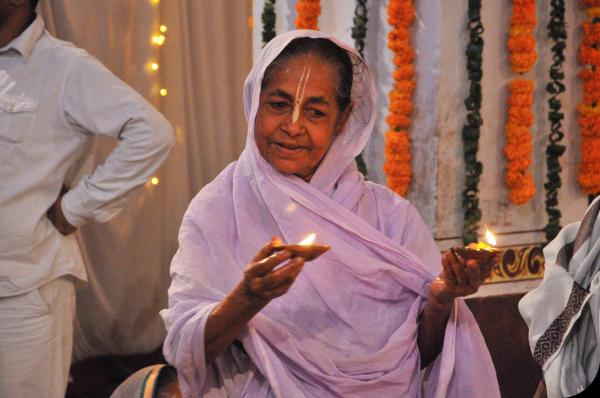 This is the third year in a row that the event is being organised in a big way by the Sulabh international which has been organising holi festival for the widows, besides arranging their visit to West Bengal and national capital Delhi during Dussehra. The NGO on routine basis, Sulabh provides them medical facilities and vocational training besides meeting their day-to-day necessities.