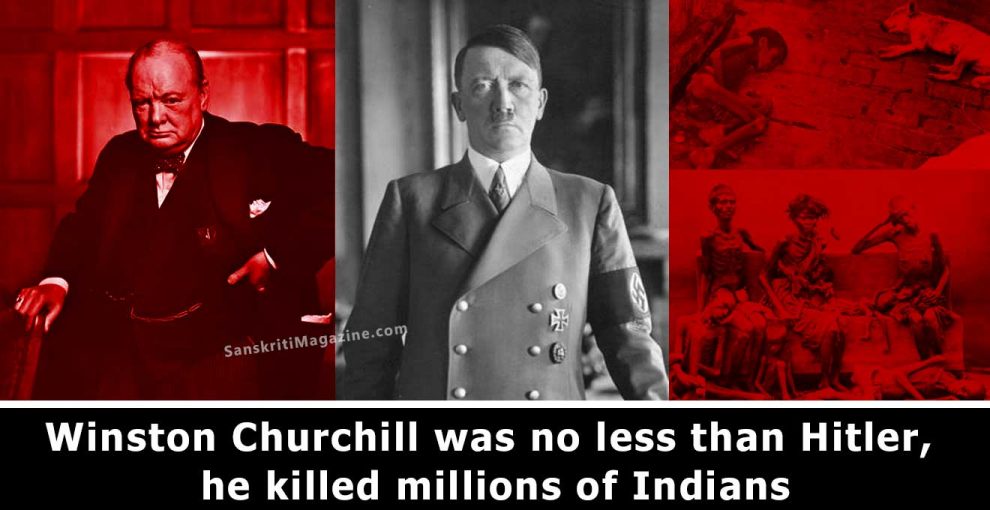 It was Churchill, whose policies led to large scale depletion of the empire’s economic resources to the extent that led to death of millions of Indians.

“No great portion of the world population was so effectively protected from the horrors and perils of World War II as were the people of Hindustan. They were carried through the struggle on the shoulders of our small island,” writes British parliamentarian Winston Churchill in his accounts of the war and quoted by journalist Madhusree Mukherjee in her groundbreaking work on the Bengal famine studied through the lenses of imperialism.

Churchill had acquired the prime ministerial position in Great Britain soon after war broke out in Europe. To the people of the isles, Churchill represented the ‘British lion’ who was indomitable. For Churchill on the other hand, protecting his country was not the only priority. He was determined to hold on to the vast British empire, at least for the next few generations.

Yet it was Churchill, whose policies led to large scale depletion of the empire’s economic resources to the extent that led to death of millions of Indians. British historians have for decades examined the personality of Churchill, remarking upon how his complex and contradictory nature added to his invincible spirit. What has been conveniently overlooked, however, is his overtly racist and ruthless imperial policies that led to the death of so many in the British India.

In the past few months, Congress leader Shashi Tharoor has been in the news for his book on the onslaughts of British colonialism in India. In particular, what has come into notice more recently is a portion of the book where he compares Winston Churchill to Adolf Hitler. “Churchill has as much blood on his hands as Hitler does. The Bengal Famine – millions died because of the decisions he took or endorsed,” says Tharoor in an interview as quoted by UKAsia. To compare Churchill to Hitler might appear far fetched, but not entirely dismissive if one were to examine Churchill’s racist mindset and in particular his policies during the Bengal famine of 1942.

Churchill and his rampant racist mindset

Writing about Churchill in his work “Churchill: The end of glory,” British historian John Charmley wrote that in view of the British prime minister, different races were lined up in hierarchy. Right on the top were white protestant Christians, and Indians were slightly higher than Africans. “Churchill saw himself and Britain as being the winners in a social Darwinian hierarchy,” writes Charmley.

It is Churchill’s ideology of racism that was foremost in his understanding of the empire. As written by historian Paul Addison, “for Churchill, the magnetism and excitement of the Empire lay in the dominion of the British over the coloured people of Africa and Asia, and the two most evocative spots on the globe were Egypt and India.”

So strong were his ideologies on the inferiority of coloured races that he did not refrain from using war tactics that are typically associated with Nazi attacks. He was particularly criticised for advocating chemical weapons, especially in the Middle East. In a secret memorandum written by Churchill on May 12, 1919, when he was the secretary of state for war, he wrote “I am strongly in favour of using poisoned gas against uncivilised tribes.” He wanted to use chemical weapons against the rebellious tribes of northern India as well and was exceedingly miffed by the India office’s efforts at containing him.

In her analysis of the Bengal famine of 1943, Madhusree Mukherjee tracked down a few survivors of the episode and provided gory details of the depredation caused. Heart wrenching stories of starvation and deaths are spread all across her book. Close to 3 million lives had been lost and unlike Mukherjee’s analysis of the devastation put complete blame of it on Churchill’s skewed racist policies. “It was not so much racism as the imbalance of power inherent in the social Darwinism pyramid that explains why famine could be tolerated in India while bread rationing was regarded as an intolerable deprivation in wartime Britain,” writes Mukherjee.

In March 1942 Japanese forces had occupied Burma and cut off an important source of rice imports. Churchill further pushed for what is called the “scorched earth” order that removed all provisions from the coast of Bengal in fear of Japanese invasion and further aggravated the impact of the famine. Between January and July 1943, by which time the famine had already set in, India had exported close to 70,000 tons of rice for war supplies, which could have easily fed several people in India. When pleas were made to Churchill to make provisions for India he cited the shortage of ships as a problem. However, records suggest that Australian ships with tonnes of wheat would pass across India for the sake of consumption in Europe.

Tharoor in his book calls the famine the “British colonial holocaust” and comments on the striking fact that the last time a famine took place in India was during British rule. However, for the British parliamentarians, the famine was the doing of India itself. Churchill is reported to have blamed Indians for the famine claiming that “they breed like rabbits”. Tharoor in his book reproduces a portion of the report on the Bengal famine that put the blame of the shortage on factors such as culture, population and climate; everything else except their own policies.

Churchill was absolutely unabashed in his dislike for India and its people. “They are a beastly people with a beastly religion,” Churchill is recorded to have said in a war cabinet meeting, as noted by Tharoor. He was hardly unaware of the wreckage that had been caused. When British officials wrote to him about the loss of lives, he is believed to have written back in response, “why has not Gandhi died yet?”