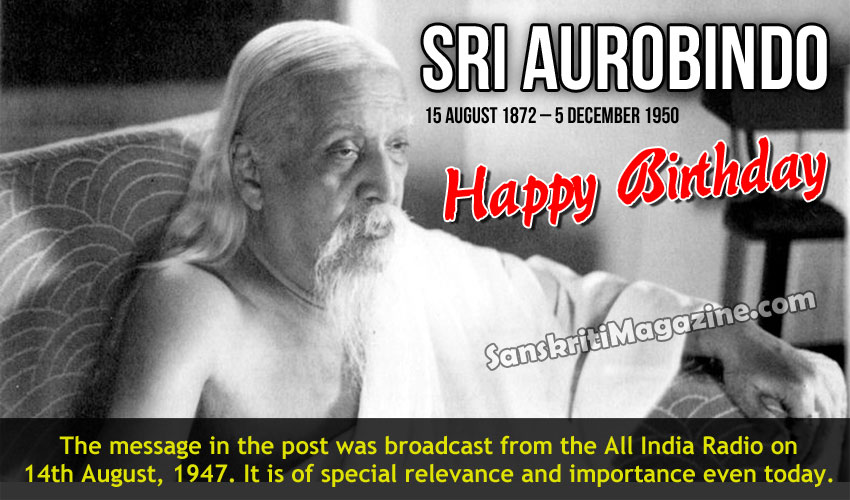 Sri Aurobindo was requested by the All India Radio, Thiruchirapalli (former Trichinopoly), to give a message for India’s independence. This is the message which was broadcast from the All India Radio on the 14th of August 1947. It is of special relevance and importance even now.

August 15th, 1947 is the birthday of free India. It marks for her the end of an old era, the beginning of a new age. But we can also make it by our life and acts as a free nation an important date in a new age opening for the whole world, for the political, social, cultural and spiritual future of humanity.

August 15th is my own birthday and it is naturally gratifying to me that it should have assumed this vast significance. I take this coincidence, not as a fortuitous accident, but as the sanction and seal of the Divine Force that guides my steps on the work with which I began life, the beginning of its full fruition. Indeed, on this day I can watch almost all the world-movements which I hoped to see fulfilled in my lifetime, though then they looked like impracticable dreams, arriving at fruition or on their way to achievement. In all these movements free India may well play a large part and take a leading position.

The first of these dreams was a revolutionary movement which would create a free and united India. India today is free but she has not achieved unity. At one moment it almost seemed as if in the very act of liberation she would fall back into the chaos of separate States which preceded the British conquest. But fortunately it now seems probable that this danger will be averted and a large and powerful, though not yet a complete union will be established. Also, the wisely drastic policy of the Constituent Assembly has made it probable that the problem of the depressed classes will be solved without schism or fissure. But the old communal division into Hindus and Muslims seems now to have hardened into a permanent political division of the country. It is to be hoped that this settled fact will not be accepted as settled for ever or as anything more than a temporary expedient. For if it lasts, India may be seriously weakened, even crippled: civil strife may remain always possible, possible even a new invasion and foreign conquest, her position among the nations weakened, her destiny impaired or even frustrated.

This must not be; the partition must go. Let us hope that that may come about naturally, by an increasing recognition of the necessity not only of peace and concord but of common action, by the practice of common action and the creation of means for that purpose. In this way unity may finally come about under whatever form – the exact form may have a pragmatic but not a fundamental importance. But by whatever means, in whatever way, the division must go; unity must and will be achieved, for it is necessary for the greatness of India’s future.

Another dream was for the resurgence and liberation of the peoples of Asia and her return to her great role in the progress of human civilisation. Asia has arisen; large parts are now quite free or are at this moment being liberated: its other still subject or partly subject parts are moving through whatever struggled towards freedom. Only a little has to be done and that will be done today or tomorrow. There India has her part to play and has begun to play it with an energy and ability which already indicate the measure of her possibilities and the place she can take in the council of the nations.

The third dream was a world-union forming the outer basis of a fairer, brighter and nobler life for all mankind. That unification of the human world is under way; there is an imperfect initiation organised by struggling against tremendous difficulties. But the momentum is there and it must inevitably increase and conquer. Here too India has begun to play a prominent part and, if she can develop that larger statesmanship which is not limited by the present facts and immediate possibilities but looks into the future and brings it nearer, her presence may make all the difference between a slow and timid and a bold and swift development. A catastrophe may intervene and interrupt or destroy what is being done, but even then the final result is sure. For unification is a necessity of Nature, an inevitable movement. Its necessity for the nations is also clear, for without it the freedom of the small nations may be at any moment in peril and the life even of the large and powerful nations insecure. The unification is therefore to the interests of all, and only human imbecility and stupid selfishness can prevent it; but these cannot stand for ever against the necessity of Nature and the Divine Will. But an outward basis is not enough; there must grow up an international spirit and outlook, international forms and institutions must appear, perhaps such developments, as dual or multilateral citizenship, willed interchange or voluntary fusion of cultures. Nationalism will have fulfilled itself and lost it militancy and would no longer find these things incompatible with self-preservation and the integrality of its outlook. A new spirit of oneness will take hold of the human race.

Another dream, the spiritual gift of India to the world has already begun. India’s spirituality is entering Europe and America in an ever increasing measure. That movement will grow; amid the disasters of the time more and more eyes are turning towards her with hope and there is even an increasing resort not only to her teachings, but to her psychic and spiritual practice.

The final dream was a step in evolution which would raise man to a higher and larger consciousness and begin the solution of the problems which have perplexed and vexed him since he first began to think and to dream of individual perfection and a perfect society. This is still a personal hope and an idea, an ideal which has begun to take hold both in India and in the West on forward-looking minds, The difficulties in the way are more formidable than in any other field of endeavour, but difficulties were made to be overcome and if the Supreme Will is there, they will be overcome. Here too, if this evolution is to take place, since it must proceed through a growth of the spirit and the inner consciousness, the initiative can come from India and, although the scope must be universal, the central movement may be hers.

Such is the content which I put into this date of India’s liberation; whether or how far this hope will be justified depends upon the new and free India.