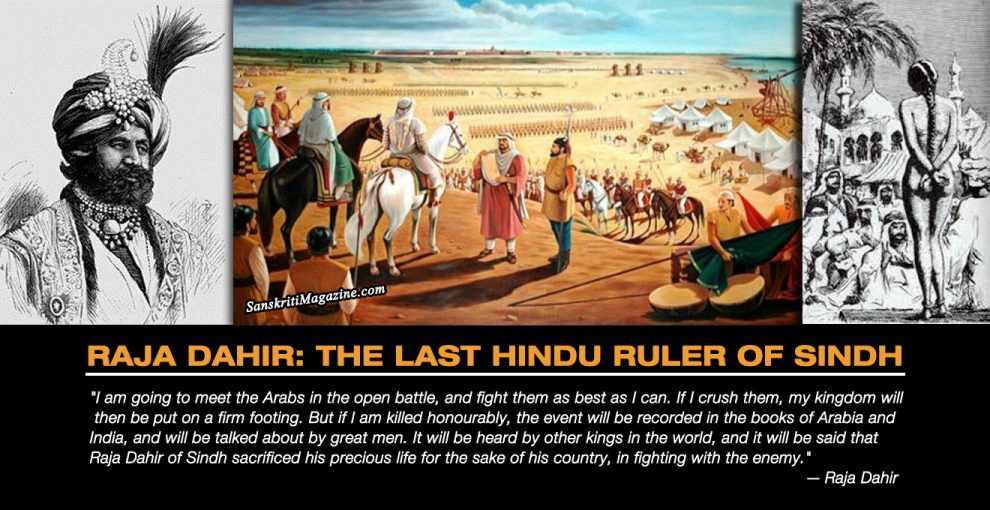 Sindh, the land adjacent to Indus River and the Thar Desert is one of the oldest inhabited regions in the world that has hosted one of the world’s great pre-classical civilizations.  It is here that Raja Dahir, the last Hindu ruler of Sindh was born in 663 AD.

Raja Dahir, the son of Chach of Aror belonged to the Pushkarna Brahmin Dynasty of Sindh and ascended the throne upon the death of his uncle Chander.  Sindh Dynasty ruled over territories that constitute parts of modern-day Afghanistan, Balochistan, Iran, Pakistan and parts of Punjab.

It was eight years later that Dahir’s kingdom was invaded by Ramal at Kannauj. After initial losses, the enemy advanced on Aror and he allied himself with Alafi, an Arab. Alafi and his warriors, who were exiled from the Umayyad caliphate, were recruited; they led Dahir’s armies in repelling the invading forces, remaining as valued members of Dahir’s court. In a later war with the caliphate, however, Alafi served as a military advisor but refused to take an active part in the campaign; as a result, he later obtained a pardon from the caliph.

The primary reason cited in the Chach Nama – the oldest chronicles of the Arab conquest of Sindh – for the expedition by the governor of Basra, Al-Hajjaj ibn Yusuf, against Raja Dahir, was a pirate raid off the coast of Debal resulting in gifts to the caliph from the king of Serendib (modern Sri Lanka) being stolen.

The Chach Nama reports that upon hearing of the matter Hajjaj wrote a letter to the Raja and upon unsuccessful resolution being reached, launched of a military expedition. Other reasons attributed to the Umayyad interest in gaining a foothold in the Makran, Balochistan and Sindh regions in addition to protecting their maritime interests, are the participation of armies from Sindh alongside Persians in various battles such as those at Nahawand, Salasal and Qādisiyyah and the granting of refuge to fleeing rebel chieftains.

There is another untold history that Al-Hajjaj’s decision to send a powerful army of soldiers commanded by his nephew, Muhammad Bin Qasim, was actually a revengeful act which was spurred by Raja Dahir’s refusal of handing over some Arab exiles who had fallen out of favour with Hajjaj and had taken asylum in Sindh.

Hajjaj’s campaign was launched under the aegis of Muhammad bin Qasim. In 711 CE, bin Qasim attacked Debal and on the orders of Al-Hajjaj. Other than this instance, the policy was generally one of enlisting and co-opting support from defectors and defeated lords and forces. From Debal, bin Qasim moved on to Nerun for supplies; the city’s Buddhist governor had acknowledged it as a tributary state of the Caliphate after the first campaign and capitulated to bin Qasim.

By enlisting the support of various local tribes, such as the Jats, Meds, Bhuttos and Buddhist rulers of Nerun, Bajhra, Kaka Kolak and Siwistan, as infantry to his predominantly cavalry army Muhammad bin Qasim defeated Dahir and captured his eastern territories for the Umayyad Caliphate.

Dahir then tried to prevent Qasim from crossing the Indus River, moving his forces to its eastern banks. Eventually, however, Qasim crossed and defeated forces at Jitor led by Jaisiah (Dahir’s son). Qasim fought Dahir at Raor (near modern Nawabshah) in 712, killing him. After Dahar was killed in the Battle of Aror on the banks of the River Indus, his head was cut off from his body and sent to Hajjaj bin Yousuf.

When Dahir’s severed head was presented to Hajjaj, a courtier sang:

“We have conquered Sindh after enormous trouble…. Betrayed is Dahir by Mohammed Bin Qasim’s masterly strategy. Rejoice, the evil doers are disgraced. Their wealth has been brought away . . . They are now solitary and brittle as eggs and their women, fair and fragrant as musk-deer, are now asleep in our harems.”

Raja Dahir’s wife and other women of the household committed Jauhar rather than be captured alive by the invaders but unfortunately, his two daughters, Surya Devi and Premala Devi were not so lucky.

The Chach Nama attributes the death of Qasim to these brave girls who had been taken captive during the campaign. Upon capture they had been sent on as presents to the Khalifa for his harem in Damascus. The account relates that they then tricked the caliph into believing that Muhammad bin Qasim had violated them before sending them on and as a result of this subterfuge, Muhammad bin Qasim was wrapped and stitched in oxen hides, and returned to Syria, which resulted in his death en route from suffocation.

This narrative attributes their motive for the deception to securing vengeance for their father’s death. Upon discovering this deceit, the Khalifa is recorded to have been filled with remorse and ordered the sisters buried alive in a wall.