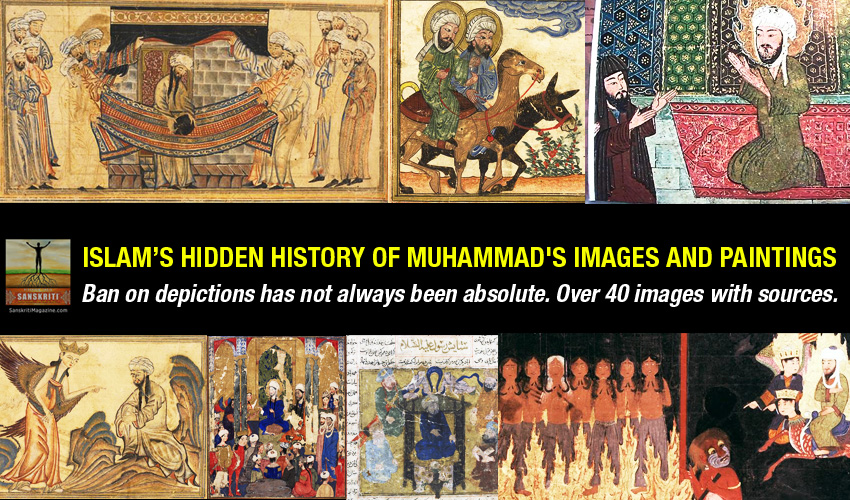 (Gallery containing over 40 images at the end of the article)

To many Muslims, any image of the prophet Muhammad is sacrilegious, but the ban has not always been absolute and there is a small but rich tradition of devotional Islamic art going back more than seven centuries that does depict God’s messenger.

It began with exquisite miniatures from the 13th century, scholars say. Commissioned from Muslim artists by the rich and powerful of their day, they show almost every episode of Muhammad’s life as recounted in the Qur’an and other texts, from birth to death and ascension into heaven.

Intended as private aids to devotion and prayer, these detailed scenes were made for both Sunni and Shia worshipers, and surviving examples can be found in dozens of major museum and library collections.

They also laid the foundations for a popular, if minority, tradition of devotional and inspirational images that still exists today, from icons cherished in homes to a five-storey government-commissioned mural in the heart of Tehran and even to revolutionary street art in Cairo – although the prophet’s face is obscured in both those public drawings.

In the wake of the murder of cartoonists at French magazine Charlie Hebdo, many Muslims and non-Muslims have argued that Islam has always banned any representation of the prophet, in part because of strong warnings in the Qu’ran and other religious texts against idolatry or anything that could be seen as a pathway towards idolatry.

This position is rarely challenged, perhaps because the existence of images of Muhammad is little known and almost never discussed outside communities that create, study or buy them. But their obscurity frustrates experts who see them as a rich part of Islam’s artistic heritage and resent the misconception that the only depictions of the prophet are mocking or racist creations by non-believers. “It’s really important for audiences that have never seen the pietistic images of Muhammad to make a radical distinction between the mystical and beautiful images that have been produced over the last 1,000 years by Muslims and for Muslims, and the offensive and sometimes pornographic images [currently in the news],” said Omid Safi, director of the Islamic Studies Centre at Duke University in North Carolina.

Author of a book about the prophet’s life, Memories of Muhammad, Safi keeps an image of Muhammad in his home, which he brought from Iran when he fled as a child.

“I think people know that for me, as scholar and as an observant Muslim, this comes out of a tradition where seeing this icon reminds me of the prophet, and thinking of the prophet reminds me of God,” he said. “It’s using the senses to arrive at God.”

Safi does not tell all his Muslim visitors who the painting depicts, though: he sometimes refers to him only as a holy man, because many Islamic theologians would reject it as blasphemous.

Sheikh Ibrahim Mogra, an imam in Leicester and assistant secretary general of the Muslim Council of Great Britain, told the BBC: “Islam in general specifically forbids the usage of imagery, and when it comes to depicting the messenger Muhammad, peace be upon him, that prohibition becomes even more relevant: we are not allowed to depict him in any shape, any way or form.”

Arab Muslim countries have shunned all depictions of the human form ever since Islam swept across the region, with early leaders anxious to make a sharp break with the pagan beliefs and idols it displaced. But the same was not true for Persian and Turkish areas where Islam took root, according to Professor Christiane Gruber of the University of Michigan, an expert in depictions of the prophet in Islamic art.

The first surviving pictures from these regions date back to the mid-13th century and were not restricted to any one sect. “Some of the earliest images were created by a Sunni ruler, who wanted to counter his father’s Shiism,” Gruber said.

They may have been part of a much longer tradition, but Mongol armies commanded by Genghis Khan’s grandson sacked Baghdad in 1258 and destroyed the imperial library. “We don’t know much about Islamic book art before that,” Gruber said. “It’s possible that before that there was a tradition but we will never know anything about it or be able to fill that gap.”

Muslim leaders who commissioned the images never tried to place them in public worship areas, and mosque decorations were restricted to calligraphy or floral and geometric designs.

Instead the images were luxury items for use in private devotion by a tiny elite, who wanted to study and meditate on the prophet’s life and teachings at home.

“There hasn’t been much public discussion about images of Muhammad,” said Gruber. “We can’t blame Muslim communities for not knowing that they exist, if we don’t make them publicly available. Publishing these images is artistic restitution in the face of senseless irreverence. It would be wonderful for us to flood our eyes with those beautiful images. Muslims can be proud of them as part of a very richly textured artistic heritage.”

No sacred images of Muhammad are on public display in the UK. New York’s Metropolitan Museum of Art, by contrast, has put one particularly beautiful depiction of the ascension of Muhammad into heaven at the heart of its Islamic art galleries. A second image appears on the museum website along with an introduction to the artistic tradition behind it.

“These portrayals, while somewhat rare, are not unheard of, as there were (and still are) many different attitudes toward depicting the prophet – and human beings in general – in the Islamic world,” the website states. “An image of the prophet Muhammad at the beginning of a book endows the volume with the highest form of blessing and sanctity. Thus, illustration of him was a common practice, particularly in the eastern regions of the Islamic world.”

A recent display of sacred Islamic art, including images of the prophet, at France’s Bibliothéque Nationale drew a stream of visitors and no controversy.

From around 1500AD, in Ottoman areas, images began to show Muhammad with his face covered by a veil, or in some cases replaced by golden flames, an abstraction to reflect his divinity. His face was not obscured in every depiction, though, and while the tradition of depicting him in human form waned, it never died.

It is most common in Shia Iran, where until recently postcards, pictures and even carpets depicting the prophet could be found on sale, and in 2008 the government commissioned a beautiful five-storey mural of Muhammad riding towards paradise, inspired by one of the manuscript paintings.

It has also reappeared in largely Sunni Egypt, where a wall painting on Mohamed Mahmoud Street, created during the revolutionary turmoil of 2012, shows Muhammad on a horse, perhaps ready to ride into battle, turned away from the viewer but identified by calligraphy floating in stars above his head.

Nasima Begum, spokeswoman for the Muslim Council of Great Britain, said views on representations of Muhammad were uniform, and described the sacred art as a historical anomaly. “The general view about depicting the prophet hasn’t changed over time,” she said. “It is believed that he should not be depicted whatsoever. In the 12th and 13th centuries, there may well have been books producing images of the prophet, however the very fact that images of his face were covered up in the 16th century or so does show that Muslims were not happy about the depictions and therefore resulted in a veil being used to cover the face.”

She declined to comment on whether the council would object to the display of the images in exhibitions of Islamic art, or their publication. To Gruber and other scholars, publishing and celebrating those pictures is essential.

“It’s not patronising just to the heritage; to my mind it’s actually quite belittling of Muslims [not to publish them],” Gruber said. “There is a pernicious unspoken message that Muslims won’t be able to handle seeing these materials or talking about them.” She added that in over a decade of research and teaching, she has never been threatened and does not consider her work dangerous.

“If I cave in to fear, then that would mean I assume that Muslim readers are essentially or inherently inclined towards violence, and I think that’s offensive,” she said. “Every time that I have seen or held any public discussion of these respectful images, there has only been positive reaction.”

By: Emma Graham-Harrison (The Observer / The Guardian Newspaper)

The Dark Side of Sufism