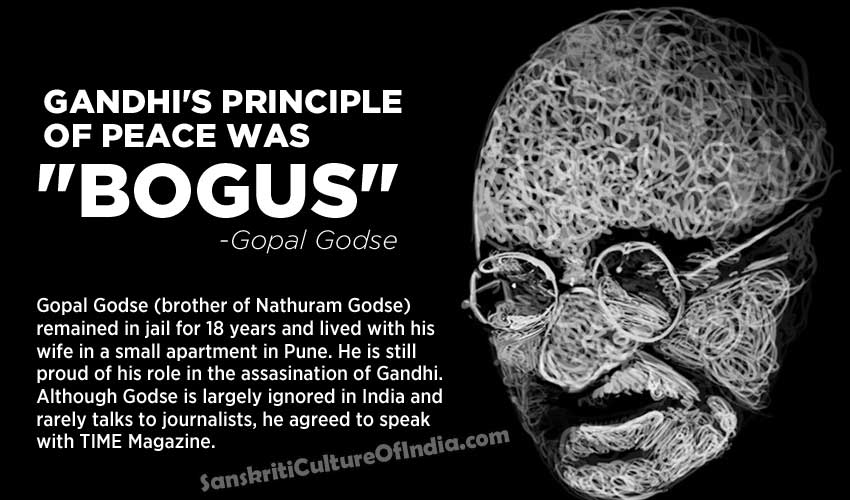 Sixty-six  years ago, on Jan. 30, 1948, Mohandas Gandhi was shot dead by Nathuram Godse. Godse believed that the Mahatma, or great soul, was responsible for the 1947 partition of India and the creation of Pakistan. Godse and his friend Narayan Apte were hanged. His brother Gopal and two others were sentenced to life imprisonment for their part in the conspiracy. Gopal Godse remained in jail for 18 years and now, at 80, lives with his wife in a small apartment in Pune. He is still proud of his role in the murder. Although Godse is largely ignored in India and rarely talks to journalists, he agreed to speak with TIME Delhi correspondent Meenakshi Ganguly.

Godse: On Jan. 20, Madanlal Pahwa exploded a bomb at Gandhi’s prayer meeting in Delhi. It was 50 m away from Gandhi. [The other conspirators] all ran away from the place. Madanlal was caught there. Then there was a tension in our minds that we had to finish the task before the police caught us. Then Nathuram [Gopal’s brother] took it on himself to do the thing. We only wanted destiny to help us — meaning we should not be caught on the spot before he acted.

TIME: Why did you want to kill Gandhi?

TIME: Did you ever see Gandhi?

TIME: Did you attend his meetings?

TIME: Can you explain how he created his mass following?

Godse: The credit goes to him for maneuvering the media. He captured the press. That was essential. How Gandhi walked, when he smiled, how he waved — all these minor details that the people did not require were imposed upon them to create an atmosphere around Gandhi. And the more ignorant the masses, the more popular was Gandhi. So they always tried to keep the masses ignorant.

TIME: But surely it takes more than good publicity to create a Gandhi?

Godse: There is another thing. Generally in the Indian masses, people are attracted toward saintism. Gandhi was shrewd to use his saintdom for politics. After his death the government used him. The government knew that he was an enemy of Hindus, but they wanted to show that he was a staunch Hindu. So the first act they did was to put “Hey Ram” into Gandhi’s dead mouth.

TIME: You mean that he did not say “Hey Ram” as he died?

Godse: No, he did not say it. You see, it was an automatic pistol. It had a magazine for nine bullets but there were actually seven at that time. And once you pull the trigger, within a second, all the seven bullets had passed. When these bullets pass through crucial points like the heart, consciousness is finished. You have no strength.

When Nathuram saw Gandhi was coming, he took out the pistol and folded his hands with the pistol inside it. There was one girl very close to Gandhi. He feared that he would hurt the girl. So he went forward and with his left hand pushed her aside and shot. It happened within one second. You see, there was a film and some Kingsley fellow had acted as Gandhi. Someone asked me whether Gandhi said, “Hey Ram.” I said Kingsley did say it. But Gandhi did not. Because that was not a drama.

TIME: Many people think Gandhi deserved to be nominated TIME’s Person of the Century. [He was one of two runners-up, after Albert Einstein.]

TIME: Is that why Gandhi had to die?

Godse: Yes. For months he was advising Hindus that they must never be angry with the Muslims. What sort of ahimsa (non-violence) is this? His principle of peace was bogus. In any free country, a person like him would be shot dead officially because he was encouraging the Muslims to kill Hindus.

TIME: But his philosophy was of turning the other cheek. He felt one person had to stop the cycle of violence…

Godse: The world does not work that way.

TIME: Is there anything that you admire about Gandhi?

Godse: Firstly, the mass awakening that Gandhi did. In our school days Gandhi was our idol. Secondly, he removed the fear of prison. He said it is different to go into prison for a theft and different to go in for satyagraha (civil disobedience). As youngsters, we had our enthusiasm, but we needed some channel. We took Gandhi to be our channel. We don’t repent for that.

TIME: Did you not admire his principles of non-violence?

TIME: What was the most difficult thing about killing Gandhi?

Godse: The greatest hurdle before us was not that of giving up our lives or going to the gallows. It was that we would be condemned both by the government and by the public. Because the public had been kept in the dark about what harm Gandhi had done to the nation. How he had fooled them!

TIME: Did the people condemn you?

Godse: Yes. People in general did. Because they had been kept ignorant.