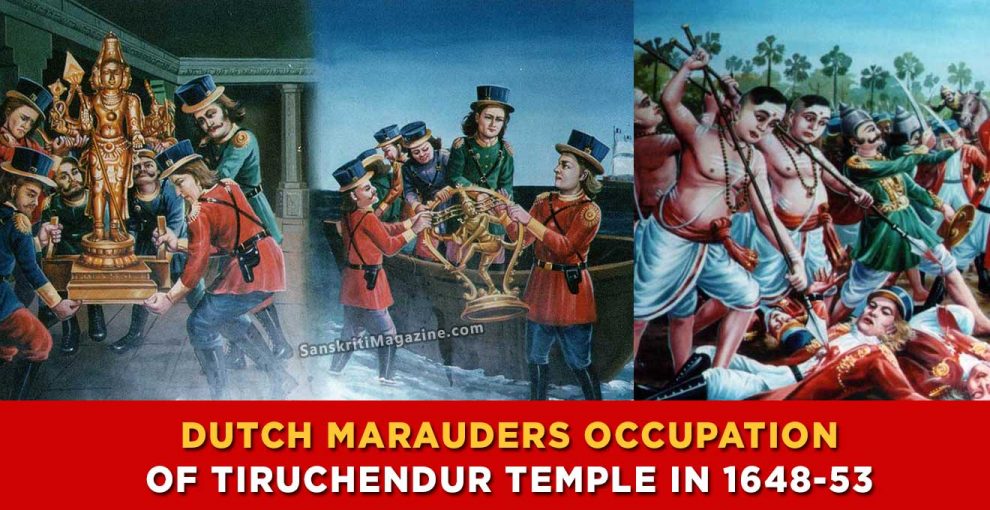 The Murugan temple at Thiruchendur was occupied by the Dutch East India company between the years 1646 to 1648, during the course of their war with the Portuguese. The local people tried to free the temple for 2 years with several futile attempts. The Dutch finally were forced to vacated the temple on orders from the Naik ruler. However, while vacating the temple, they hacked away and removed the murtis (idols) of the main deity of the temple, and took it back to Galle, Dutch Ceylon. The murtis were returned after many negotiations with the Madurai Nayakar.

The Thiruchendur Murugan Temple (properly known as Thiruchendur Arulmigu Senthilnathar Temple) located in the Tuticorin District, India, is considered to be one of the 6 abodes of the Tamil God Murugan the son of Shiva. No record exists on the data of actual construction of the temple, but there are records of improvements to the temple by Pandya and Chera Kingdoms. However, early Cankam poetry refer to the Murugan seashore shrine at Tirrucciralaivay, which is thought to refer to the Thiruchendur Temple. The earliest existing inscription at the temple is dated 875 AD, and talks about a Pantiyan called Varekuna Maran. 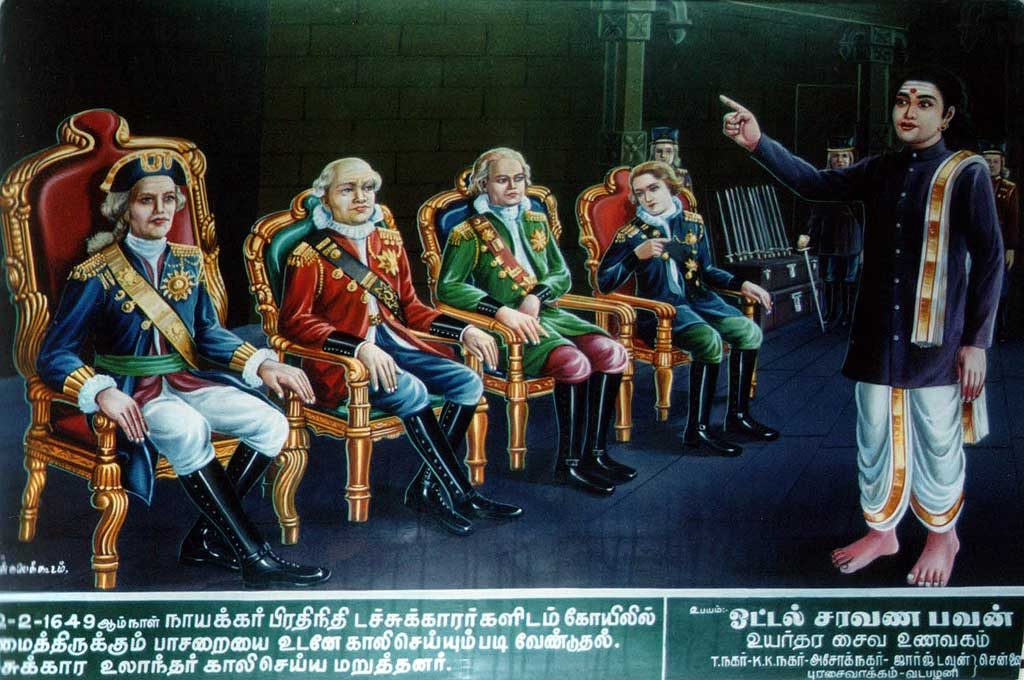 The Dutch sought the aid of their Governor at headquarters in Ceylon. He came over to the mainland in ten boats, landed at Manappar, seized the Portuguese Church at Virarampattanam, occupied the Temple at Tiruchendur and fortified the latter with guns.

The people were sorely distressed and they appealed to Tirumalai Nayak. The Nayak sent word to the Dutch to vacate the temple and re-imburse their loss at Kayalpattinam. The request was unheeded. The Dutch nevertheless marched on Tuticorin, ravaged the country all around it, and demanded 40,000 reals as a ransom to quit the place. The amount was also pressed for payment but only a small amount could be got together. 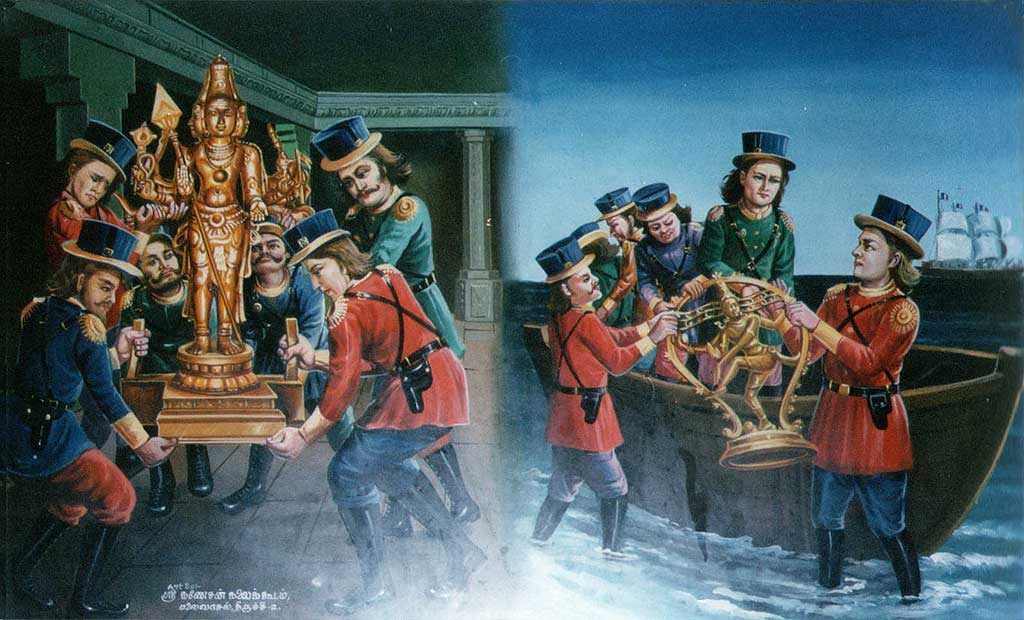 In 1648 the Dutch left Tiruchendur, taking with them all the temple icons, and demanding an enhanced ransom of 100,000 reals. They carried away the icons Shanmukhar and Siva Natarajar, thinking that they were made of gold

While va­cat­ing the tem­ple, the Dutch are said to have tried to de­stroy the struc­ture by set­ting fire and bom­bard­ment. How­ever their ef­forts were fu­tile with the man­da­pams with­stand­ing their bat­tery at­tack. This is de­scribed by the French writer M Ren­nel, in his book A De­scrip­tion, His­tor­i­cal and Ge­o­graph­i­cal, of India (1785), where the au­thor claims he has heard the story from a for­mer Dutch sol­dier who took part in the events.

Ac­cord­ing to local tra­di­tion, while va­cat­ing the Tiruchen­dur tem­ple, the Dutch de­cided to carry away the murti of the main deity of Shan­mukhar and Śiva Natara­jar, as they thought they were made of gold. Ini­tial at­tempts to melt the murtis for the metal proved fu­tile, and they car­ried away the murtis by sea. How­ever, once at sea, there was a wild storm and the ves­sel shook vi­o­lently. Fright­ened that the murtis had caused the bad weather, the Dutch sailors threw away the murti at sea. 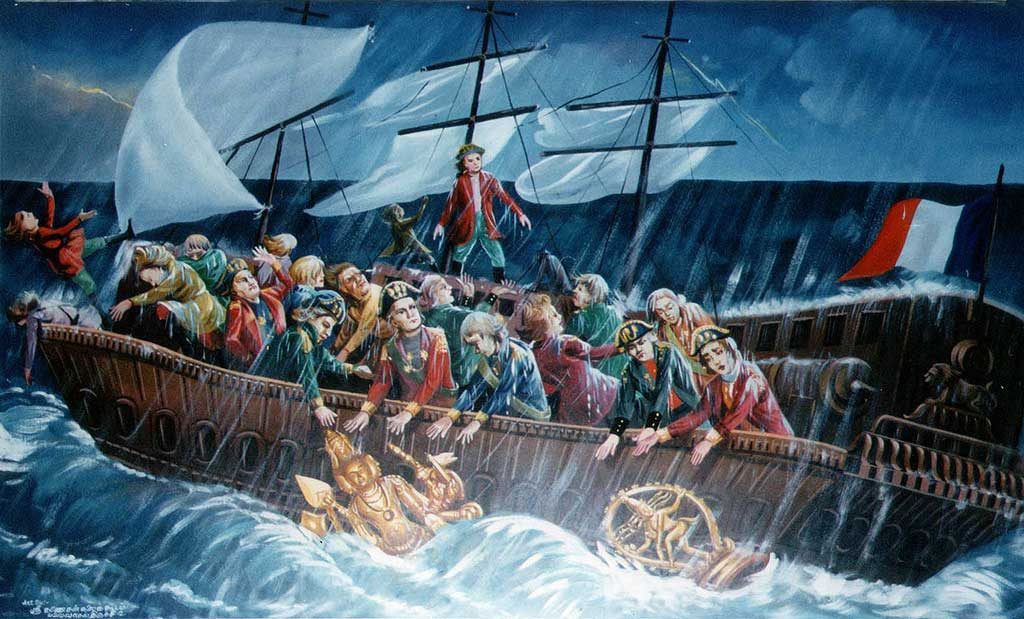 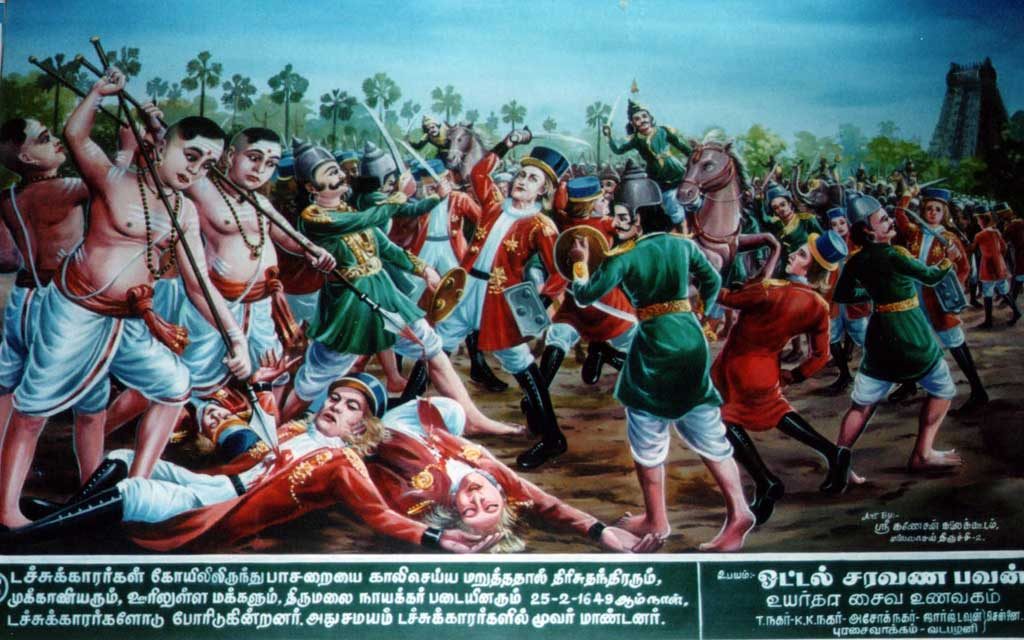 In the meanwhile the people at Tiruchendur gathered a force consisting of four elephants, 50 to 60 horses, and 500 to 600 men to oust the Dutch out of the temple. The attempt was unsuccessful with the loss of 50 men of the Nayak forces. The people were utterly helpless and sorely tried

The loss of the deities was discovered and duly communicated to Vadamalaiyappa Pillaiyyan, the local administrator of the Nayakkan ruler at Tirunelveli. A great devotee that he was, Pillaiyyan was sorely affected and knew not what to do. He ordered for a similar deity to be made in panchaloka. As the duplicate one was ready, and was on its way to Tiruchendur to be installed, in 1653 Vadamalaiappa Pillaiyyan had a dream. 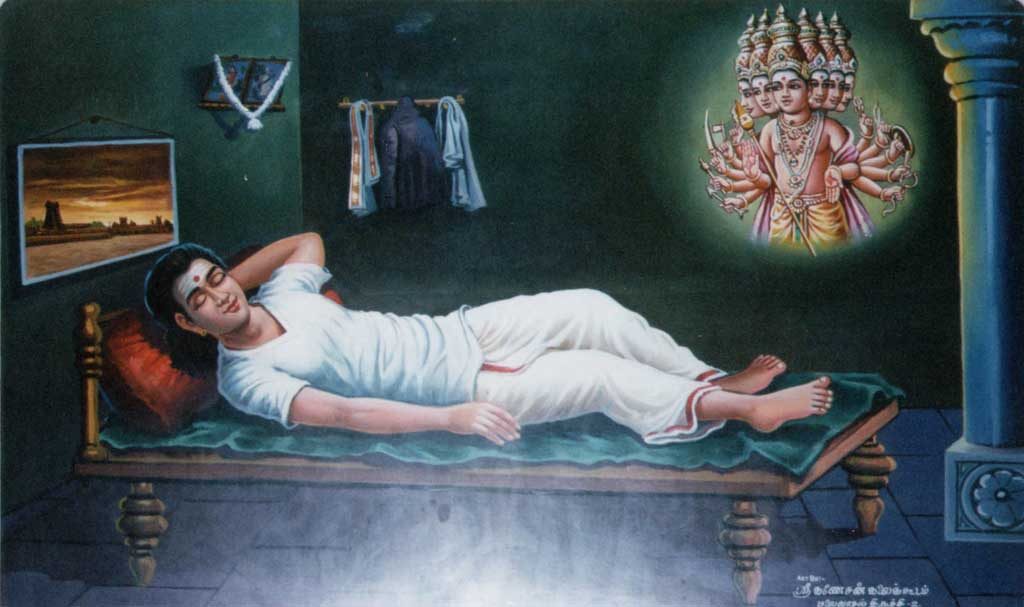 Acting to the advice conveyed to him by the God, he put out to sea and following the instructions that the deity was to be found at the spot whereon a lime fruit would be found floating, and the place marked by the circling overhead of a kite, the bird of Vishnu.

Vadamalaiappa Pillaiyyan recovered the original deity and reinstalled it in the temple in the year 1653. The replacement deity was then consecrated in the shrine of Tiruppirantîsvarar alias Venku Patcha Kovil situated east of Palamcottah (known as Murugan Kurichi). 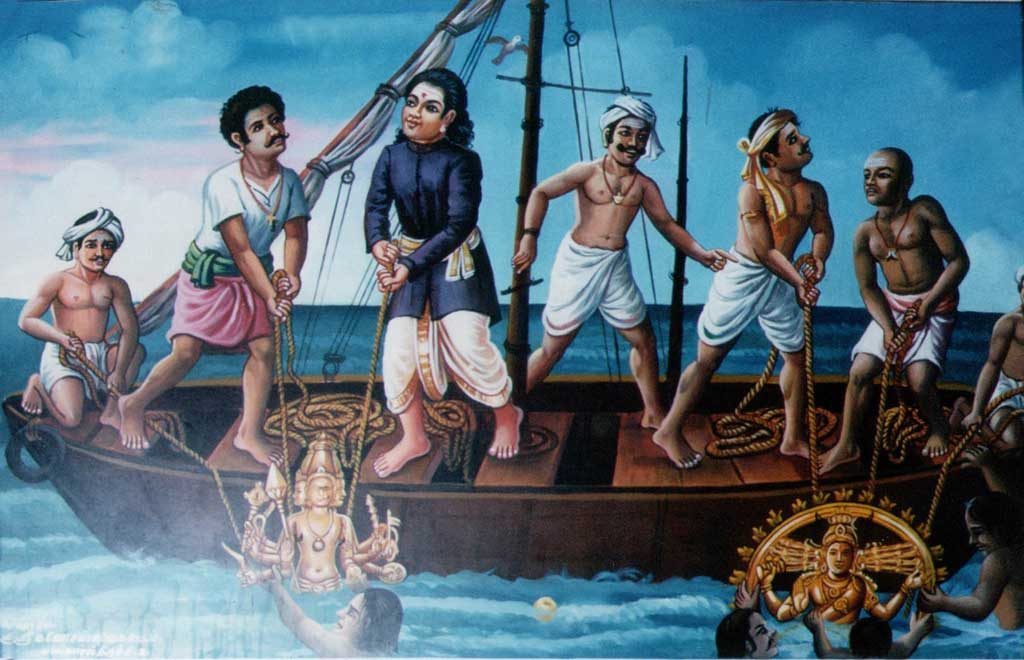 Vadamalaiappa was greatly struck by the Lord’s grace in giving him this great relief, in memory of which he erected a mantapa at Tiruchendur in his name and endowed it largely for the performance of a Kattalai abhishekam and pujas for Subrahmaniam on the seventh days of Masi and Avani festivals. An inscription at the mantapa relates the incidents referred to.

Among many others, kirtanas composed by Venri Malaik Kavirayar, are sung at this mantapa at the time when Shanmukhar is brought here for Ubaya Mandagappadi on the seventh day of the Masi and Avani festivals. The poem relates the incidents and their rejoicings at the Lord being got back again. “Vadamalai Venba” is another poetic panegyric on Vadamalaiappa Pillaiyyan. 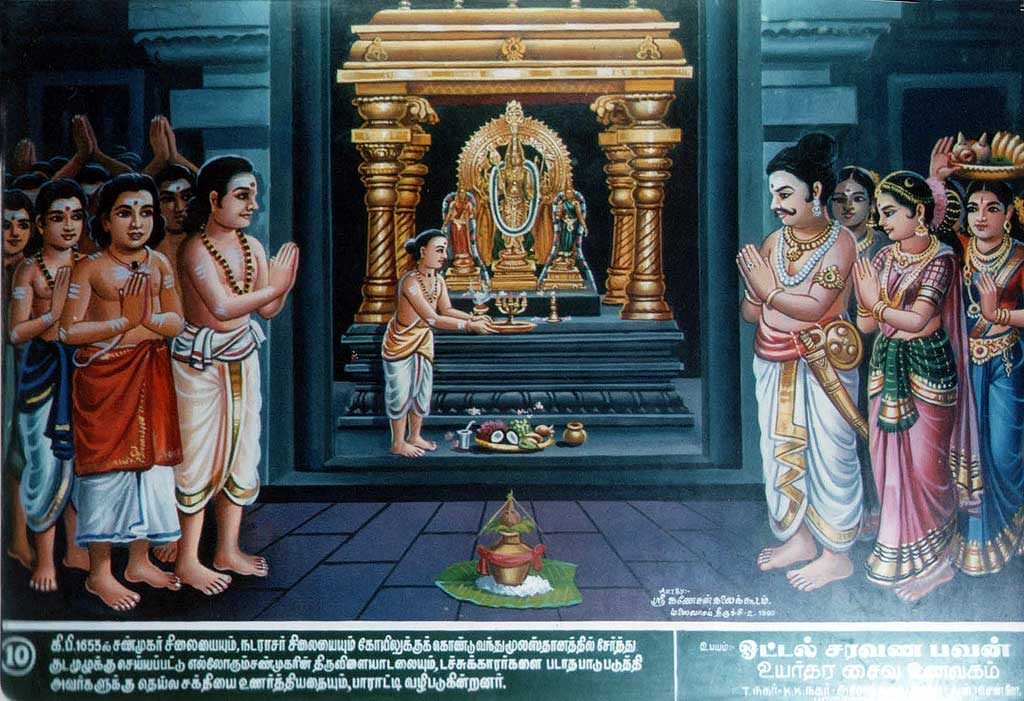 Vadamalaiappa Pillai reinstalled the original icon in the temple in the year 1653. The replacement icon was then consecrated in the shrine of Tiruppirantîsvarar alias Venku Patcha Kovil situated east of Palamcottah (known as Murugan Kurichi).

Vadamalaiappa Pillai was greatly struck by the Lord’s grace in giving him this great relief, in memory of which he erected a mantapa near Thoondikai Vinayakar Kovil at Tiruchendur in his name and endowed it largely for the performance of a Kattalai for Subrahmaniam on the seventh days of Masi and Avani festivals. An inscription at the mantapa relates the incidents referred to.

M. Rennel, the French author of A Description, Historical and Geographical, of India (published in Berlin, 1785), gives a picture of the temple, which, he says, he got from a soldier in the service of the Dutch Company. He relates an incident which offers a reasonable explanation of the Tiruchendur tradition. “In a descent made by the Dutch off the Coast in 1648,” he says, “the Dutch halted in the temple and on leaving did their best to destroy it by fire and by a heavy bombardment. But they only partially succeeded and the tower defied all their efforts.” Possibly the capture of the deity was one of their achievements.

As a matter of fact M. Rennel calls the place Tutucutin, but from the picture and an accompanying sketch-map it is clear that Tiruchendur was meant. The Dutch were incessantly at war with the Portuguese on the coast.