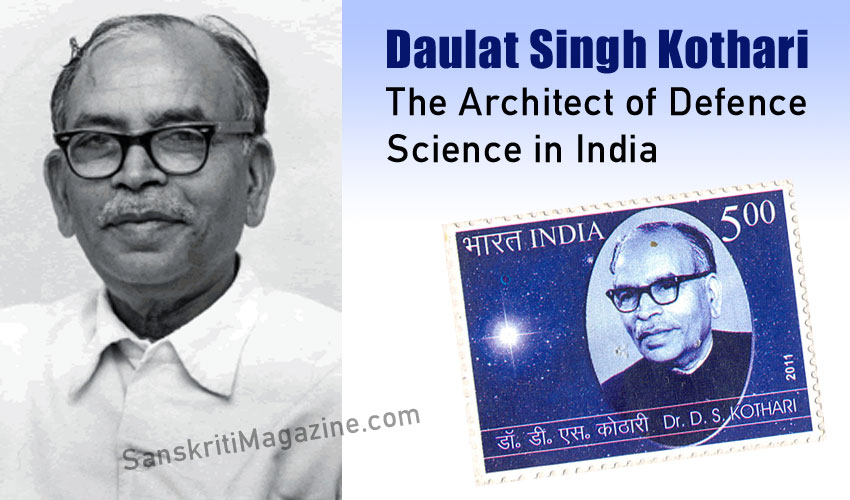 The true aim of all education is to understand the wonderful world around us, to develop self-discipline and contribute the happiness to our home and the community. This makes education enjoyable and most exciting, inspiring adventure.
~ D.S. Kothari

Daulat Singh Kothari, popularly known as D. S. Kothari, was an outstanding scientist and a great educationist. His contribution to the entire spectrum of Indian education from elementary school to university level is well-known. He was a student of Meghnad Saha. Kothari is regarded as the architect of defence science in India. He also played an important role in development of many other organizations, notable among them are the University Grants Commission and the National Council of Education Research and Training. Above all Kothari was an outstanding teacher. He had the moral and intellectual qualities of a rare human being with a multifaceted personality.

D.S. Kothari was born on July 6, 1906 at Udaipur. At that time Udaipur was in the Mewar State of Rajasthan.

His father, Shri Fateh Lal Kothari, was a school teacher. Kothari had three brothers and one sister. His father died in 1918 at the age of 38 years and Kothari, who was the eldest of five children, was just 12 years old then. His father’s early death plunged the family into severe economic difficulties.

Fortunately for Kothari he was invited by his father’s friend Sir Siremal Bapna, the then Chief Minister of Indore State, to stay with him and study with his children. Kothari graduated in 1922 from Maharaja Shivajirao High School of Indore. After his graduation he came back to Udaipur and joined the Intermediate College. In his Intermediate Examination, which he passed in 1924, he stood first in the Rajputana Board and secured distinctions in three science subjects – Physics, Chemistry and Mathematics. For his outstanding performance in Intermediate Examination, the Maharana of Mewar granted him a monthly scholarship of Rs. 50/- for pursuing higher studies which was an exceedingly generous grant.

This was possible by the scholarship that he received from the United Province (UP) State Government for going abroad and an interest free loan of Rs. 3,500/- from the Mewar State Government because he wanted to ensure that his family did not suffer after his departure.

In September 1930 he sailed for England, where he worked at Cavendish Laboratory, Cambridge under the supervision of Ernst Rutherford, to whom he was recommended by Meghnad Saha. After obtaining his PhD degree from the Cambridge University he came back to India and resumed his duties as demonstrator in the Physics Department of the Allahabad University.

In May 1934 Kothari Joined the Delhi University as Reader and Head of the Physics Department. In those days the science departments of the Delhi University functioned in a hired building in Kashmiri Gate area of now old Delhi. The University imparted education only upto BSc degree. There was little equipment in the laboratories.

However, soon after his joining a number of developments took place towards the improvement of the university. The university moved to the Viceregal Lodge Estate. The Faculty of Science decided that teaching in chemistry and Physics be extended to MSc level. In 1938 Sir Maurice Gwyer, former Chief Justice of the Federal Court of India, was appointed as the first full time Vice Chancellor of the University.

Kothari was appointed Professor of Physics in 1942. With active support of the Vice-Chancellor he took the task of establishing the Physics Department. The first batch of five students passed MSc in 1944. Kothari was able to attract some outstanding physicists to the Department. He established the New Physics Laboratory.

While sending his good wishes for the New Laboratory Albert Eisntein advised Kothari: “Keep good comradeship and work with love and without pre-conceived ideas and you will be happy and successful in your work.” Kothari often referred to this remark.

Many eminent physicists frequently visited the department and their visits enhanced the prestige of the Department. Among those who visited included: PMS Blackett, Niels Bohr, PAM Dirac, P Kapitza, I Prigogine, CV Raman, H.J. Bhabha, M.N. Saha and K.S Krishnan.

Kothari established an active research group in physical science at Delhi University. He published a number of research papers in various branches of physics and astrophysics including plasma physics, magnetohydrodynamics, quantum electrodynamics, and relativistic quantum statistics. His work on pressure ionization was highly acclaimed. It found wide ranging applications.

Sir A.S. Eddington wrote: “I mentioned that we only gradually came to realize that ionization could be produced by high pressure as well as high temperature. I think the first man to state this explicitly was D.S. Kothari. Stimulated by some work of HN Russell, Kothari has made what I think is an extremely interesting application.”

Further commenting on Dr. Kothari’s work, Arnold Sommerfeld wrote: “During the times of Galileo and Kepler the planets were at the focus of astronomical interest but in view of the developments of the last few decades the interest has shifted to stellar subjects and spiral nebula. It is noteworthy that the Indian DS Kothari has developed an audacious relationship between the old fashioned planets and the now discovered newest heavenly bodies, the white dwarfs”.

The “message” of the teacher to the students is not merely to impart knowledge content of books which is largely information fast getting out of date. But more than that it should be inspiration, by his/her example, towards the process of character building and the use of knowledge for welfare of the community. The total message to the students, and to the community, is the total life of the teacher.

Kothari played an important role in shaping the University Library. This is because he could realize that without a good library no teaching and research could be done. In May of 1936 he was unanimously elected Secretary to the Library Committee, a post he held till October 1943. He organized the Third All India Library Conference at the University of Delhi in December 1937. He persuaded the Vice Chancellor to invite S.R. Ranganathan, who is regarded as father of library science in India, for suggesting a reorganization plan of the University Library. Dr. S.R. Das Gupta who taught history at St. Stephen College was appointed the first University Librarian.

In 1948 the Government of India appointed Kothari as Scientific Advisor to the Ministry of Defense. The Government invited PMS Blacket for advising them in organizing defense science in India. It may be noted that Kothari and Blacket worked together in the Cavendish Laboratory, Cambridge under the guidance of Ernst Rutherford. Blacket had played an important role in organizing defence science in the United Kingdom during the Second World War.

While commenting on the Kothari’s contribution in establishing defence science in India Kothari’s colleague in Defence Science Organization, Nagaratnam wrote: “In giving a direction and coherent shape to the Defence Science Organisation, Professor Kothari had no precedents to go by. It is a tribute to his clear thinking and visionary foresight that he unerringly identified thrust areas of relevance in the country’s geopolitical (both the then existing and anticipated future) context. Further there were no ready-made specialists in any of these disciplines in the country. He carefully chose through personal contact, scientists (mostly from universities) who had the necessary interest, aptitude and competence. He guided them personally on developing these disciplines on healthy lines. He himself spared no effort to get a mastery over all these areas (most of which were new to him). He organized weekly seminars on relevant subjects and made it a point to participate actively in each one of them, and particularly encouraged the younger scientists. He believed in humble beginnings and natural growth.”

During of Kothari’s term as Advisor to the Defence Ministry the following laboratories were established under the aegis of Defence Sciences Organisation:

Ex-President of India, APJ Abdul Kalam in his book, Ignited Minds: Unleashing the Power Within India. wrote: “Dr. D.S. Kothari, a professor at Delhi University, was an outstanding physicist and astrophysicist. He is well-known for Ionisation of matter by pressure in cold compact object like planets. This theory is complementary to the epoch making theory of thermal ionization of his guru, Dr. Maghnad Saha. Dr. D.S. Kothari set a scientific tradition in Indian defence tasks when he became Scientific Advisor to Defence Minister in 1948. The first thing he did was to establish the Defence Science Centre to do research in electronic materials, nuclear medicine and ballistic science. He is considered the architect of defence science in India. We are celebrating this great mind through a Chair research at the Indian Institute of Science”.

In 1961 Kothari was appointed the Chairman of the University Grants Commission and he remained in this post for almost 13 years. Kothari initiated a number of new activities in colleges and universities. Kothari firmly believed that the future of the country depended essentially on education and his commitment on this was total. So there is no wonder that when the Government of India appointed the Indian Education Commission in 1964, Kothari became its Chairman.

In the report entitled “Education and National Development” prepared by the Commission, Kothari’s vision of education is clearly reflected. To quote from the report: “Destiny of India is now being shaped in her classrooms. This, we believed is no mere rhetoric. In a world based on science & technology, it is education that determines the level of prosperity, welfare and security of the people. On the quality and number of persons coming out of our schools and colleges will depend our success in the great enterprise of national reconstruction, the principal objective of which is to raise the standard of living of our people.”

Kothari’s deep concern for education led to his association with the National Council of Educational Research and Training (NCERT), since its inception. He not only conceptualized the role and functions of NCERT but also gave a blueprint for its future development in the Report of the Education Commission (1964-66).

Kothari’s role in reorganizing the examination and selection process for central services of the Government of India is quite significant. He had immense faith in the youth of the country and did everything he could to encourage the young scientists. Daulat Singh Kothari passed away on February 4, 1993 at 88 years of age.

In honour of Kothari the Delhi University established the D. S. Kothari Centre for Science, Ethics and Education. One of the objectives of this centre is to collect technical and non-technical writings of Kothari in book form.

The great reality of our age is science. The understanding of nature which science provides, and the deep harmony it unfolds, are deeply satisfying to the human mind. The power of science to transform society is immense, perhaps more than of any other activity. Equally real and pervasive is human suffering—starvation, pain, devastation, violence, loneliness and deep anguish of the soul. Science will suffer grievously and in the end reduce to a mockery, if all its power is not yoked to alleviate human suffering.