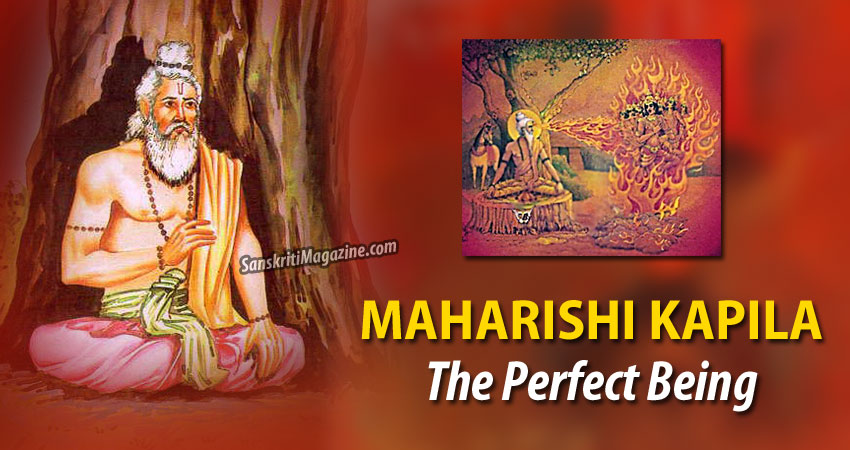 Kapila Muni, a renowned sage of antiquity, is the author of the philosophical system known as Sankhya, which forms an important part of India’s ancient philosophical heritage. Sankhya is both a system of metaphysics, dealing with the elemental principles of the physical universe, and a system of spiritual knowledge, with its own methodology, culminating in full consciousness of the Supreme Absolute.

He is believed to have been born in Prabhas Kshetra near Dwaraka in Gujarat, India to Kardam Muni and Devahuti.  His birth is dated around 600 BCE but other sources give much earlier period.

Kapila is described in the Puranas as an avatar of Lord Vishnu who came to earth to restore the spiritual balance through his teachings.  He is known for teaching a process of liberation known as bhakti yoga.

Kapila is the brother and teacher of Anusuya, also known as “Sati Anasuya” the chaste wife and the mother of Dattatreya.  He is considered to be a descendant of Manu, the primal human being, and a grandson of Lord Brahma.

According to the Vedic social system, a man with a grown son may accept the order of sannyasa, thus renouncing all connections with his family and worldly life, and entrust his wife to the care of his son.  With this in mind, Kardam Muni took a vow of silence and went to live in the forest as an ascetic, entrusting Devahuti in his son’s care.  Kapila instructed his mother Devahuti in the philosophy of yoga and worship of Lord Vishnu, enabling her to achieve self-realization and attain moksha (liberation) from the cycle of death and rebirth.

Kapila is mentioned by Krishna in the Bhagavad Gita as the greatest of all perfected beings:

Of all trees I am the banyan tree, and of the sages among the demigods I am Narada. Of the Gandharvas I am Citraratha, and among perfected beings I am the sage Kapila. (10.26)

In fact, Kapila’s teachings are quoted extensively within the Srimad Bhagavatam.

In the Mahabharata (3.107), Kapila is a major figure associated with the descent of Goddess Ganga as a river from heaven.

King Sagar of Ayodhya, an ancestor of Rama, had performed the Aswamedha sacrifice ninety-nine times.  On the hundredth time, Indra, the king of Devas became jealous and kidnapped the horse, hiding it in the hermitage of Kapila.

The 60,000 sons of Sagara found the white horse tied beside the meditating Kapila. The enraged princes condemned Kapila as a thief and attacked him. When the sage opened his eyes in anger, his immense power turned the princes into ashes.  Anshuman, one of the grandsons of King Sagara, begged the Sage to redeem the souls of all those he had turned to ashes.  Kapila replied that they could only be redeemed if Goddess Ganges descended from heaven and touched their ashes.

Bringing Ganga River to Earth was a near impossible task which could not be completed by successive generations.  As a result, the negative impact of the dead princes multiplied in their destructive energy and the kingdom began to lose its peace and prosperity.  Unable to bear the suffering of his people, King Bhagirath, a descendant of King Sagara, turned over the kingdom to his trusted ministers to perform harsh penance.  He finally succeeded in bringing Ganga River down and redeemed the souls of his ancestors.

According to the oldest available Samkhya work, Isvarakrsna’s Samkhya-karika (“Verses on Samkhya,” c. second century AD) Kapila taught his principles to Asuri, who taught them to Pañcasikha, the Gandharva.

Sankhya deals with the elemental categories or principles of the physical universe, Sankhya is what Western scholars generally refer to as “metaphysics.” The term sankhya literally means “to count.” This name is used because Sankhya philosophy enumerates principles of cosmic evolution by rational analysis. The etymological meaning of the word sankhya is “that which explains very lucidly by analysis of material elements.”

Philosophically, this term is used because the Sankhya system expounds analytical knowledge that enables one to distinguish between matter and spirit. This understanding culminates in bhakti, devotion for and service to the Supreme. It may be said, therefore, that Sankhya and bhakti form two aspects of the same process, bhakti being the ultimate goal or ultimate aspect of Sankhya.

Some Buddhist texts claim that the Buddha was Kapila in his previous life while other sources present him as a well-known philosopher whose students built the city of Kapilvastu.  According to one tradition, this city is believed to be the birthplace of the Buddha.

Swami Vivekananda considered Kapila to be “the greatest psychologist the world has ever known” and said, “there is no philosophy in the world that is not indebted to Kapila.”