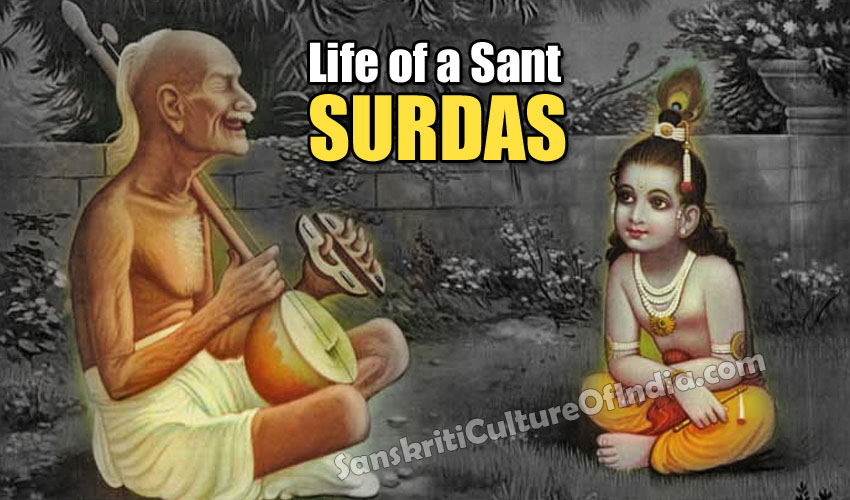 Surdas, the 15th century sightless saint, poet and musician, is known for his devotional songs dedicated to Lord Krishna. Surdas is said to have written and composed a hundred thousand songs in his magnum opus the ‘Sur Sagar’ (Ocean of Melody), out of which only about 8,000 are extant. He is considered a saint and so also known as Sant Surdas, a name which literally means the “slave of melody”.

The time of Surdas’s birth and death are uncertain and suggest that he lived over a hundred years, which make the facts even murkier. Some say, he was born blind in 1479 in Siri village near Delhi. Many others believe, Surdas was born in Braj, a holy place in northern Indian district of Mathura, associated with the exploits of Lord Krishna. His family was too poor to take good care of him, which led the blind boy to leave home at the tender age of 6 to join a wondering group of religious musicians. According to one legend, one night he dreamt of Krishna, who asked him to go to Vrindavan, and dedicate his life to the praise of the Lord.

A chance meeting with the saint Vallabharacharya at Gau Ghat by the river Yamuna in his teens transformed his life. Shri Vallabhacharya taught Surdas lessons in Hindu philosophy and meditation and put him in the path of spirituality. Since Surdas could recite the entire Srimad Bhagavatam and was musically inclined, his guru advised him to sing the ‘Bhagavad Lila’ – devotional lyrical ballads in praise of Lord Krishna and Radha. Surdas lived in Vrindavan with his guru, who initiated him to his own religious order, and later appointed him as the resident singer at Srinath temple in Govardhan.

Surdas’ lilting music and fine poetry attracted many laurels. As his fame spread far and wide, the Mughal emperor Akbar (1542-1605) became his patron. Surdas spent the last years of his life in Braj, the place of his birth and lived on the donations, which he received in return of hisBhajan singing and lecturing on religious topics, until he died in c. 1586.

Surdas was profoundly influenced by the Bhakti movement – a religious movement which focused on deep devotion, or ‘bhakti’, for a specific Hindu deity, such as Krishna, Vishnu orShiva that was prevalent in Indian between c 800-1700 AD, and propagated Vaishnavism. Surdas’s compositions also found place in the Guru Granth Sahib, the holy book of the Sikhs.

The Poetical Works of Surdas

Although Surdas is known for his greatest work – theSur Sagar, he also wrote Sur-Saravali, which is based on the theory of genesis and the festival of Holi, andSahitya-Lahiri, devotional lyrics dedicated to the Supreme Absolute. As if Surdas attained a mystical union with Lord Krishna, which enabled him to compose the verse about Krishna’s romance with Radha almost as he was an eyewitness. Surdas’ verse is also credited as one that lifted the literary value of the Hindi language, transforming it from a crude to a pleasing tongue.

A Lyric by Surdas: ‘The Deeds Of Krishna’

There is no end to the deeds of Krishna:
true to his promise, he tended the cows in Gokula;
Lord of the gods and compassionate to his devotees,
he came as Nrisingha
and tore apart Hiranyakashipa.
When Bali spread his dominion
over the three worlds,
he begged three paces of land from him
to uphold the majesty of the gods,
and stepped over his entire domain:
here too he rescued the captive elephant.
Countless such deeds figure in the Vedas and the Puranas,
hearing which Suradasa
humbly bows before that Lord.