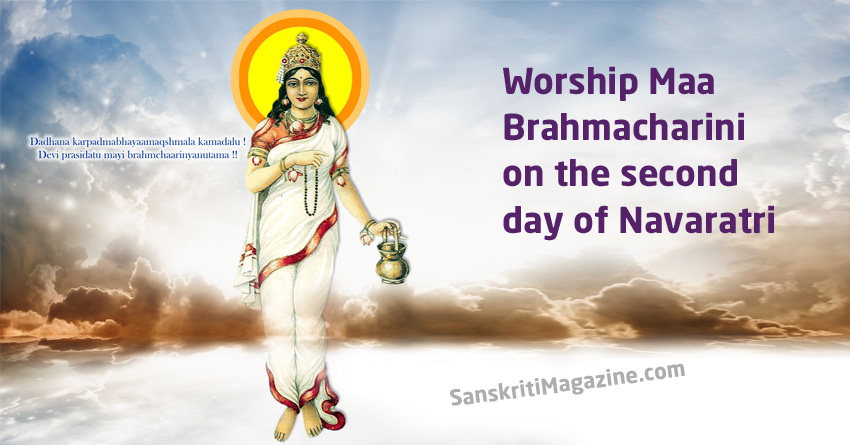 Maa Brahmacharini is the second manifestation of Maa Durga who is worshippied on the second day of Navratri. Here word “Brahm” refers to “Tapa”. So Brahmcharini means Tapa Charini – The one who perform Tapa or penance. It is Said that the “Vedas”, “Tatva” & “Tapa” are synonyms of word “Brahm”. The form of Brahmacharini is tremendously effulgent and extremely majestic.

She holds a rosary in her right hand and Kamandalu in her left. SHE personifies love and loyalty. Mata Bhramacharni is store-house of knowledge and wisdom. Rudraksha is HER most adorned ornament. When she was incarnated as the daughter of Himalaya, then influenced by the instructions of Devrishi Narada, she practiced very hard penances in order to obtain Lord Shiva as her divine consort. Due to her unearthly penances she was termed as Brahmacharini. She spent one thousand years, only on fruits and beet-roots. One hundred years she spent only by eating leafy vegetables.

For a sufficient perfiod of time observing complete fast she suffered tormenting of nature like torrential rains and scorching sun and biting cold, under the open sky. After such a difficult routine she lived only on dry Bilva pattaras (leaves) fallen on the ground for three thousand years. She kept her engrossed for twenty-four hours in worshiping Lord Shiva. After that she gave up eating even these dry leaves. For several thousand years she went on without any food and water. Because she gave up eating dry Bilva leaves so she was known to be Aparna as one of her epithets.

After the hardship of penance for several thousand years her body became extremely lean and thin. She was reduced to skeleton only. Her penance, sharpened as it was, caused great disturbance in all the three worlds. The whole universe was shaken. The Gods, the Rishis, the Siddhas, the Munis all eulogized her penance as an unprecedented virtuous action. Ultimately Lord Brahma through an oracle addressed her and said to her in a very pleasant manner-O Goddess, so far nobody has ever practiced such an austere penance. Only you could have done it. This wonderful deed is being praised in all the four quarters. Your desire would be fulfilled. You will decidedly get Lord Shiva as your divine consort. Now stop your penance and go home. Your father would be shortly coming to take you back.

Legend states that in a previous birth she was Parvati Hemavati the daughter of Himvan. Once when she was busy in games with her friends,Naradaji came to see her and on reading her hand/palm-lines Narad Muni stated that, “You will get married with a naked-terrible ‘Bhole baba’ who was with you in the form of Sati, the daughter of Daksh in previous birth. But now you have to perform penance for him.” There upon Parvati told her mother Menaka that she would marry none except Shambhu, otherwise she would remain unmarried. Saying this she went to observe penance. That is why her name is famous as tapacharini – Brahmacharini. From that time her name Uma also became familiar. She is the one who practices devout austerity. Filled with bliss and happiness, she is the way to emancipation – Moksha.‘Brahma’ here refers to the meditative aspect of Brahmacharini and is always depicted as pious women or Sannyasin.

She is also worshipped as goddess Tara and is associated with the pious form of Goddess Shakti. She is believed to be that aspect of Mother Goddess, which was present in Sati and Goddess Parvati, when they both did intense austerities to get Lord Shiva as husband. During the penance Mata Parvati did in order to gain Lord Shivji as her consort for thousands of yrs. without eating even leaves she penance so she was called ‘Aparna’. Seeing her body her mother uttered U-ma and so she is also called ‘Uma’. Her worship increases sacrifice,good deeds and restraint in humans. Rudraksha is her most adorned ornament.In some regions, Goddess Chamunda swarup of Durga is worshiped on the second day of Navratri. In this form she is believed to have killed the demons Chanda and Munda.There is a famous Chamunda Mata temple at Jodhpur.

Brahmacharini Durga is capable of providing unending benefits. By worshiping her the person inculcates penancing, renouncing, dispassion, ethical conduct and restraint in himself. Even in the most critical periods of struggle the mind remains unshaken and he does not deviate from the path of duty. By the grace of mother Brahmacharini he gets success and victory always and everywhere. On the second day of Navratri Durga Pooja it is the Brahmacharini aspect of mother Goddess Durga that is worshipped. This way the mind of the striver moving upward is established in Swadhisthana Chakra. The Yogi, who makes his mind stay in this Chakra gets the devotion and blessings of the Goddess.

Om doom durgaya namah. Bhramcharni devi is a store-house of knowledge and wisdom. Rudraksha is her most dear ornament. One hand holds a “Kumbha” or water pot and the other rosary beads of rudraksh. Special benediction–She personifies love and loyalty. We see energies of blue light manifesting bringing empowered actualization of goals. Mantra chanting empowers throat chakra, rectifies negative thoughts and blesses access for more liberating super karma and attracts forgiveness of negative karma. This day we also receive energies of strength and tolerance and create positive Karma to bring fame and fortune to ourselves and family. At this time blue light radiates from plants and trees in fine filaments activating throat and speech energies.

Whatever is spoken will multiply for the next 6 months so on this day one must be particularly attentive to what one says out loud especially. We see the presence of energies of their Lordships Sita Ram–golden triangular energies of blessing as big as the human head descending from the north-east. All those who speak the truth during this time receive this energy within their mind, homes and future life. Offering: two apples and a candle/lamp to Bhramcharini devi morning and evening (after sunset); accept and share the apples in the evening with others. Mentally offer all fragrant flowers, fruits, gems, clothing.Offering of kheer – with lotus seeds (phul makhana) will bring glory to you.