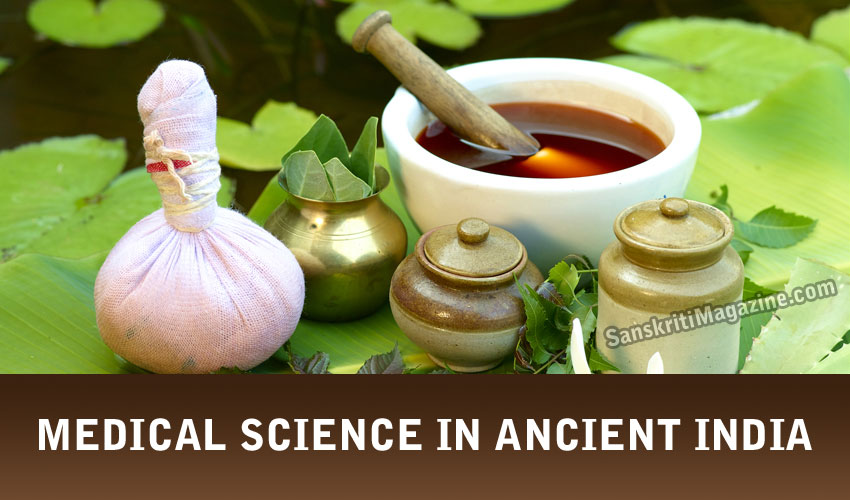 The exact knowledge of the body serves the purpose of maintaining its health, because it is only on the strength of the body that we can determine the factors contributing to its well- beings. Body is combination of five forms which serves as the substratum of consciousness and which maintains the balance. When the body elements become discordant, the body suffers diseases and even death. Therefore, medicine is that which, when rightly administered becomes at the same time a harmonizer of the increased or decreased body elements. The Indian word for medical science is Ayurveda, literally the science of the prolongation of life. In ancient India, the only discipline that promises to be fully secular and contains clear potentials of the modern understanding of natural science is medicine.

Since man stepped out in the natural world, it is being presumed that health, hygiene and medicine might have been one of the serious human concerns. The Harappan Civilization evidences reflect the attitude of its people towards the health and sanitation. Systematic town planning, public wells, bathrooms, an efficient drainage system, contributed to the robust health of the inhabitants. Anjana (Collyrium) which prevents and cures eye diseases were used. The evidences of anjana salaka, trephined human skulls, curved knives found in excavations indicate that, surgical measures were also practiced in Indus Civilization (1).

In the Rigveda (X.91), we have a hymn of 23 verses in the praise of the healing herb or osadhi, interestingly, attributed to a seer, named ‘Bhisak’ (the physician) (2). A number of Vedic gods such as Rudra, Varuna, Soma, Maruts are specially eulogized for their superb skill in medical practice. Rudra is mentioned as ablest of all the physicians ( bhisaktamamtva bhisayam srnomi) (3). The same hymn praises the hands of Rudra with which he prepares medicines for all. In other hymn he is praised as lording over all the medicines that exists on the earth (4). Soma is illustrated as treating the ailing ones on earth (5). Varuna is eulogized as possessing a hundred bhisajah which means either a hundred medicines or a hundred physicians (6). ‘Water’ is also praised as containing remedies for medicines. Water becomes the healing agent or medicine. It causes the cure of diseases. Maruts are invoked for bringing medicines (7). Among the Rigvedic deities The ‘Asvins’ the twin gods are addressed as the physicians of the gods ‘daivya bhisaja’8. They are accredited with a number of wondrous medical feats which includes the rejuvenation of the old, effecting a safe and painless delivery, curing the burns, healing the wounds etc.

Accounts of the surgical and medical feats of the Asvins, through legendry, cannot historically be irrelevant but as Chatopadhyay said “ they are indicative of a historical fact, viz, the general trend of ancient Vedic thought, The poet dream of a model physician not merely with the most wonderful medical skill but also with the very strong compassion for all-a compassion that makes them the friendliest to all friends.” (9)

The Vedic tradition of healing and medicine reaches to its climax in the Atharvaveda and in the Kausikisutra. Atharvaveda mentioned a few medicines such as , jangida, gulgulu, kustha, satavara. These are all to be used as amulets for protection from certain diseases. Kausikisutra describes the applications of various medicines. (10)

Later the three major source books of Ayurveda, figuratively called the ‘vrihattrayi’or ‘three great ones’ are Charaka Samhita, Susurta Samhita and Astangasamgraha. Besides these, we have a Bower manuscript and Bhela Samhita.

The Charaka Samhita of 2nd -3rd Century B C E has 120 chapters and arranged in 8 sections. These are Sutra-sthana, Nidana-sthana,Vimana-sthana, Sarira-sthana, Indriya-sthana,Chikitsa-sthana, Kalpa-sthana, Siddhi-sthana. It is an enormous medical compilation dealing with pharmacology, food, certain diseases, their causes and treatment, doctor and quacks, issues such as taste, nutrition, pathology, anatomy, embryology, diagnosis and prognosis, therapy, pharmacy etc (11). It also tells us the work of different medical schools being in circulation ‘vividhani hi sastrani bhisajam paricaranti loke’. It is undoubtedly the most important work to understand the theoretical position of Ayurveda.

The Susruta-Samhita consists of 120 chapters and arranged in 5 books. These are Sutrasthana, Nidana-sthana, Sarira-sthana, Chikitsa-sthana, Kalpa-sthana. There is an appendix in chapter 66 which is called the Uttratrantra or postscript to the treatise is added. It is primarily a treatise on surgery which may have been composed in the late Centuries BCE, but it was edited over several centuries till about the 5th Century C E. Susruta was basically a surgeon, so, he naturally emphasized the importance of surgical treatment and mastering for this purpose, the anatomy of human body through dissection. He discusses the training of a surgeon and gives the detail description of his tools (12).

Other important text of the Vrihattrayi is Vagabhata’s Astangasamagraha, perhaps of 600 CE, which provide a systematic and comprehensive medical knowledge. It largely shares the doctrinal and therapeutic contents of Charaka-samahita. The applications of all the branches of science are that, they deal with surgery, treatment of diseases, children’s diseases, toxicology of aphrodisiacs and dominant diseases. Herbal remedies also occupied the major importance in these texts. Susruta makes reference to several salts, discusses method of preparation and an elaborate account of extraction of alkali’s from plant sources which make these works as an indispensable source of early knowledge of chemistry in India. The most notable aspect of this medical science is to understand man and nature in their close elemental identity to keep the former in good health and cure him of the diseases when affected. The ancient medical science also left its impact outside Indian subcontinent. The major text of Ayurveda were translated into Arabic, Persian and Tibetian. The Ayurvedic ideas influenced the botanical science in Europe. The overall significance of this science may be gauged from the fact that it still continues in India and elsewhere as one of the effective alternatives to the allopathic tradition of the modern medicine.

Thus, it is clear that the medical science evolved independently in ancient India. But this science-consciousness goes strongly against the ideological requirements of the hierarchical society. The custodians of the counter ideology, interested in drawing a mystical veil on man and nature, sense danger practically in every aspect of the science-consciousness, its secularism for rational processing of empirical data, its materialism and its democratic commitment. There is continuous condemnation of doctors and its practitioners from Yajurveda to the later commentaries on manuscript. But at least, a section of the scientist try to evade censorship by conceding to it, through at the cost of self consistency. Charaka and Susruta does this, and their text tells us how the medical tradition flourished in ancient Indian society.

History of Indian Numerals
Mention of Uranus, Neptune and Pluto in Mahabharata
Comment