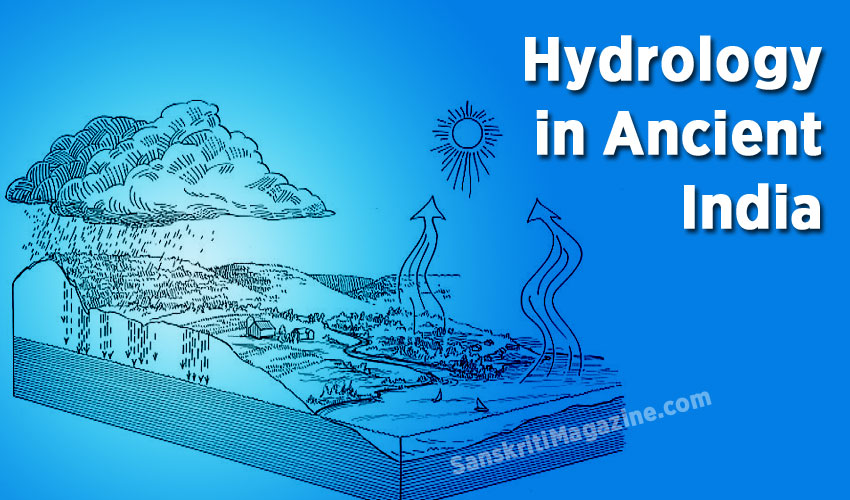 Natural entities and forces, such as Sun, Earth, Rivers, Ocean, Wind, Water, etc. have been worshipped in India as Gods since time immemorial. Perhaps it is not a sheer coincidence that the King of these Gods is Indra, the God of Rain. Clearly, ancient Indians were aware of the importance of rain and other hydrologic variables for the society. The ancient Indian literature contains numerous references to hydrology and a reading of it suggests that those people knew the basic concepts of hydrological processes and measurements. Important concepts of modern hydrology are scattered in various verses of Vedas, Puranas, Meghmala, Mahabharat, Mayurchitraka, Vrhat Sanhita and other ancient Indian works.

The Vedic texts which are more than 3,000 years old contain valuable references on hydrologic cycle. The most important concepts, on which the modern science of hydrology is founded, are scattered in Vedas in various verses which are in the form of hymns and prayers addressed to various deities. Likewise, other Sanskrit literature has valuable discourses regarding hydrology.

Verse I, 32, 10 says that the water is never stationary, but it continuously gets evaporated and due to smallness of particles we cannot see the upgoing water particles. In the Varahamihira’s Vraht Sanhita (550 A.D.), three Chapters are devoted to hydrometeorology comprising Pregnancy of clouds (Chapter 21), Pregnancy of air (Chapter 22) and quantity of rainfall (Chapter 23). Slokas 1 and 2 of Dakargelam (Chapter 54 of Vraht Samhita) state the importance of science of ground water exploration which helps man to ascertain the existence of water. These are as follows:

The water veins beneath the earth are like vein’s in the human body, some higher and some lower. The water falling from sky assumes various colours and tastes from differences in the nature of the earth. In Linga Purana a full fledged chapter (I, 36) has been devoted to the science of hydrology. It scientifically explains evaporation, condensation, rainfall with suitable examples and says that the water cannot be destroyed, only its state is changed:

i.e. “after being heated by sun, water contained in most of the materials on earth gets converted to smoke (vapour) and ascends to sky with the air and subsequently gets converted to cloud. Thus the combination of smoke, fire and air is the cause of cloud formation. These clouds cause rainfall under the guidance of Lord Indra, having thousand eyes. Vayu (51. 14-15-16) states like this:

i.e. the water evaporated by sun ascends to atmosphere through the capillarity of air, and there gets cooled and condensed. After formation of clouds it rains by the force of air. Thus, water is not lost in all these processes but gets converted from one form to other continuously. Verses of Rigveda (I, 27.6; I, 32.8):

This verse explains that all water that goes to the sky with wind by the heat of Sun rays gets converted to clouds and then again after the penetration by sunrays it rains and gets stored into rivers, ponds, ocean, etc. Two verses (V, 54, 2 & V,55, 5) explain the cloud-bearing winds as the cause of rainfall, viz.:

Efficient water use, lining of canals, construction of dams, tanks, essential requirements for the construction of good tanks, bank protection methods, spillways and other minor aspects were given due consideration in ancient times in India. Well organized water pricing system was prevalent during the time of Kautilya. Various references are available in the Vedas emphasizing the importance of efficient water use so as to reduce the intensity of water scarcity and drought, etc.

Verses (184. 15–17) of Mahabharata state that the plants drink water through their roots. The mechanism of water uptake by plants is explained by the example of water rise through a pipe. It is said that the water uptake process is facilitated by the conjunction of air. This clearly reveals the knowledge of capillary action of soil in the movement of water up and down the plant. Two Mantras of Atharvaveda say that if the water source is on mountains, then the river formed will be perennial and will flow with high speed (AV.I., 15.3) and (AV.11, 3.1). Similarly Verse (II, 3.1) reveals the same fact saying that the rivers originating from snowclad mountains will keep on flowing in summers also.

People also developed technique of knowing the slope of an area by means of a flowing river. Variation in the height of water table with place, hot and cold springs, ground water utilization by means of wells, well construction methods and equipment are fully described in 54th chapter of Vrhat Sanhita named as ‘Dakargala’. Sun rays, wind, humidity, vegetation, etc., as the major causes of evapotranspiration were well realized.

The Vishnu Purana (II, 5.3) classified the soils of subterranean region in seven categories, (i) Black (2) White or Yellowish (3) Blue or Red (4) Yellow (5) Gravelly (6) Hilly or boulder and (7) Golden hued. Regarding the occurrence of ground water, it says: “If there is a termite mound nearby to the east of a Jambu tree, plenty of sweet water, yielding for a long time occurs at a depth of two Purushas, at a distance of three hastas (cubit) to the south of the tree (Vr.S.54.9). Similarly, an Arjuna tree with a termite mound to the north shows water at a depth of 3.5 Purushas at a distance of 3 hastas to the west”.

In Vedic age, Indians had developed the concept that water gets divided into minute particles due to the effect of sunrays and wind. In various places in Puranas, it is stated that water cannot be created or destroyed, only its state is changed in various phases of the hydrologic cycle. Evaporation, condensation, cloud formation, precipitation and its measurement were well understood in India in Vedic times. Effects of Yajna, forests, reservoirs, etc. on rainfall; classification of clouds, their colour, rainfall capacity, etc.; forecasting of rainfall on the basis of natural phenomena, such as colour of sky, clouds, wind direction, lightening, and the activities of animals; all these were well developed in India even before the 10th century B.C. Contrivance to measure rainfall was developed during the time of Kautilya (4th century B.C.) which had the same principle as that of modern hydrology except that the weight measure of Drona was adopted instead of modern depth measurement of rainfall.

The knowledge of monsoon winds and height of clouds along with the division of atmosphere was well developed in the Vedic age. “O cloud-bearing winds, your troops are rich in water, they are strengtheners of life, and are your strong bonds, they shed water and augment food, and are harnessed with waves that wander far and spread everywhere. Combined with lightning, the triple-group (of wind, cloud and lightning) roars aloud, and the water falls upon the earth.” By the time of Kautilya (4th century B.C.), Indians had developed the method and instrumental devices for measuring rainfall. This raingauge was known as Varshaman. Kautilya describes its construction in these words “In front of the store house, a bowel (Kunda) with its mouth as wide as an aratni (nearly 18 inches) shall be set up as rain gauge,” (Arthasastra, Book II, Chapter V). Kautilya was acquainted with the distribution of rainfall in various areas. He furnishes a very accurate scientific description of the same with statistics. The quantity of rain that falls in the country of Jangala (desert countries) is 16 dronas (4 Adak = 1 drona and one adak equals nearly 7 lb, 11 oz), half as much in moist countries (the countries which are fit for agriculture), 13.5 dronas in the countries of Asmakas (Maharashtra); 23 dronas in Avanti, and an immense quantity in the western countries, the border of the Himalayas and the countries where water channels are used in agriculture. From this it is evident that the spirit of the methodology of the measurement of rainfall given by Kautilya is the same as we have today, the only difference is that he expresses it in weight measures while we use a linear measure nowadays (Arth, Chapter XXIV, Book II, P. 130).

Further discussing the geographical details of rainfall, he observes “when one third of the requisite quantity of rain falls both during the commencement and closing months of the rainy season, and two third in the middle, then the rainfall is considered very even.” Discussing the classification of clouds and interrelationship of rainfall and agriculture, the celebrated author adds “there are the clouds which continuously rain for seven days; eighty are they that pour minute drops; and sixty are they that appear with the sunshine”. When rain, free from wind and unmingled with sunshine falls so as to render three turns of ploughing possible, then the reaping of good harvest is certain.

The Vrhat Sanhita and Mayuracitraka by Varahamihira are two very important treatises which are replete with climatological and meteorological information, although they abound in astrological guesses, they contain sufficient scientific facts also. The Vrhat Samhita has three chapters (21st, 22nd, and 23rd_ on climatology and meteorology. The Jains have made considerable contribution in the field of meteorology. The ‘Prajnapana’ and ‘Avasyaka Curnis’ provide outstanding studies of the various types of winds. This tradition must have been far older than these treatises. The ‘Prajnapana’ makes reference of snowfall and hailstorm. The ‘Trilokasara’ of Nemichandra says that there are seven types of periodic clouds. They rain for seven days each in the rainy season. Then there are twelve species of white clouds. They also bring rain for seven days each. Thus the season of rainfall extends over 133 days in all.

Buddhists too, at least before 400 B.C., have attempted at a very scientific classification of clouds and four species mentioned by them can be compared with the most important four species enumerated in modern meteorology. So much of subtle observation at such an early date is an achievement of the finest order.

It is very interesting to learn that Varahamihira in as early as 550 A.D. presented a simple method for obtaining potable water from a contaminated source of water. Various plant materials along with solar heating, aeration, quenching of water with fire heated stones, gold, silver, iron or sand were suggested for this purpose. The change in the quality of water with the months of year and suitability of water from different sources for various uses were described.

Mention of Uranus, Neptune and Pluto in Mahabharata
Garbha Upanishad: Conception and growth of a child in mother’s womb
Comment