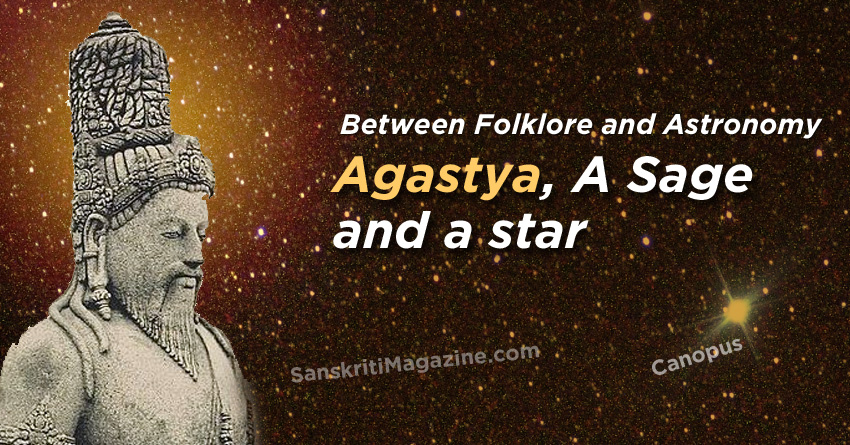 It is argued that the star Agastya (Canopus) is named after sage Agastya, who crossed the Vindhya mountain and saw the star for the first time in about 4000–5000 BC.  Further, it is shown that Agastya was the first national integrator, who combined the two ancient civilizations of India, viz. the Aryan (Sanskrit) civilization of the Indo-Gangetic plain and the Dravidian (Tamil) civilization of the Cauvery basin, into the mighty Hindu civilization of India.

The author had been thinking about the Aryan–Dravidian dichotomy since his sojourn at Kodaikanal Observatory as a research scholar during 1952–54. The authors’s quest led him to the thesis presented in this article. He was motivated by a paper by Ovendeen in the Observatory magazine of the Royal Astronomical Society, in which Ovendeen had argued that the zodiacal constellations were discovered by the Ionians living on a Greek island. This article was presented at a seminar held at B. M. Birla Planetarium, Hyderabad about 20 years ago, and included as Chapter 12 in the author’s 1998 INSA Project Report: ‘Pre-Siddhantic Indian Astronomy – A Reappraisal’ (unpublished). It is hoped that the present article will be of interest to students of ancient Indian history.

The Puranic story of Agastya

India has a rich heritage of Vedic and Puranic folklore. Some of the folktales are not easily comprehended, while others can be understood on a rational basis. Here we concentrate on one of the latter type, viz. the story of Agastya, who is the author of 25 hymns (nos 166 to 190) of the first ‘mandala’ of the Rigveda. The Puranic story tells us that the Vindhya Mountain tried to compete with the Himalayas in height by becoming taller and taller. People became afraid that it may obstruct the path of the sun; so they approached sage Agastya who was the Guru (teacher) of the Vindhyas. As Agastya arrived, the Vindhya Mountain prostrated before him in reverence. The sage said that he was going south and that the mountain should lie prostrated till he returned. But the sage never returned thus laying the Vindhyas flat for ever (1).

It is easy to interpret this tale as an allegory to the actual crossing of the Vindhyas by Agastya, a northerner, for the first time in history. In ancient times, it was easier to cross the seas by navigation. But it was quite difficult to traverse the mountainous land covered with thick forests and inhabited by wild animals. Hence it was a great feat on the part of Agastya to cross the Vindhya Mountain. In fact, it is further told that sage Agastya drank the ocean and later filled it up again, which is another way of saying that he had also crossed the sea. It may be mentioned that the sage Agastya is also quite popular in Indonesia, the land beyond the Indian Ocean. 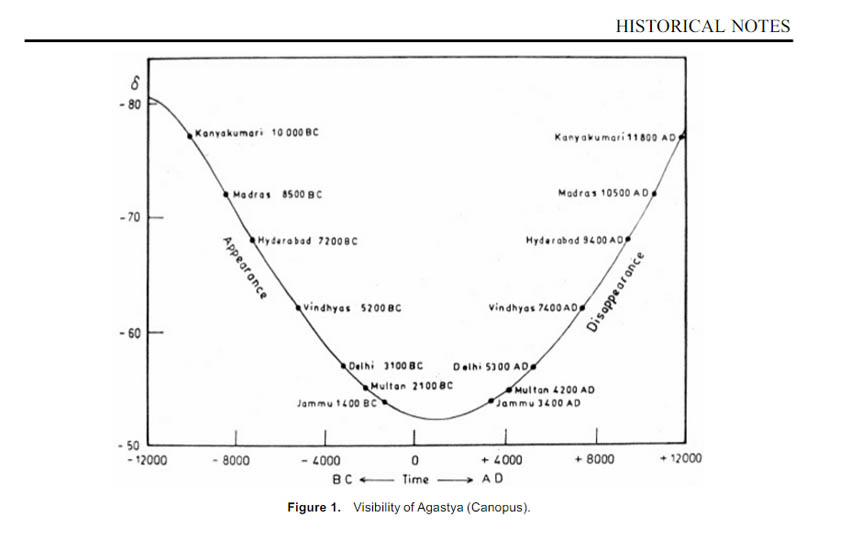 Now if we assume the above interpretation to be correct, it is possible to find the epoch of Agastya’s crossing the Vindhyas. Here we have a clue that Canopus, the second brightest star in the night sky, is called Agastya in India. This star is close to the ecliptic south pole, having an ecliptic latitude of –76°. As the celestial poles go round the ecliptic poles due to the phenomenon of precession of the earth’s axis of rotation, this star becomes visible from different latitudes on the globe at different times. If we assume that for a star to be visible at a place its altitude at the meridian passage should be at least 5°, then calculations give the visibility curve for Agastya (Canopus), as shown in Figure 1 for the various epochs from 12,000 BC to AD 12,000. We see that Agastya was not visible from any part of India before 10,000 BC. First it became visible at Kanyakumari around that epoch. Thereafter, as it was brought more and more northwards by precession, it became visible at various places in India, as shown in Figure 1. It became visible in the east coast (in the present Chennai region) in 8500 BC, and in the present day Hyderabad in 7200 BC, in the Vindhya region in 5200 BC, at Delhi in 3100 BC, etc. At present it is visible from most parts of India for longer or shorter duration. This cycle will repeat after every 25,725 years.

It is thus clear that around 5000 BC, the star Agastya was visible from the south of the Vindhyas, but not from the north of it. If sage Agastya was the first to cross the Vindhyas from the north, he would have been the first northerner to see the star. Hence the star has been named after him, just as the Magellanic clouds in the southern sky are named after the navigator Magellan, who first saw them as he sailed southwards. This fixes an epoch of 5000 BC for sage Agastya. This date is based on the assumption that for a star to be visible its meridian altitude has to be at least 5°. If we make 8° meridian altitude as the criterion for visibility, the date of Agastya would be shifted to about 4000 BC. The dates 5000 and 4000 BC should therefore bracket the probable epoch of Agastya crossing the Vindhyan Mountains.

Another part of the Agastya myth is that he gave the gift of the Cauvery river and Tamil language to the people. This is again a clear allusion to his discovery of the great Tamil civilization indigenous to the Cauvery basin. He was thus the first person to link the two great ancient civilizations of India, viz. the Aryan (Sanskrit) civilization thriving in the IndoGangetic plains north of the Vindhyas and the Dravidian (Tamil) civilization thriving in the Cauvery basin south of the Vindhyas. Traditional Indologists may not agree with this interpretation because they believe that the Aryans came to India from outside and drove the native Dravidians of the Indus Valley to the south. They base their argument on the destruction of the Indus Valley Civilization of Mohenjodaro and Harappa sometime in the second millennium BC. However, there is evidence showing that the real cause of destruction of the Indus cities was a geological change rather than an invasion. In fact, ancient Sanskrit and Tamil literature does not show any trace of the large scale movements of people as required by the above theory of conflict between the Aryans and Dravidians.

The Vedas are the oldest literature of the Aryans. They mostly talk about the land and rivers between Afghanistan and the Ganges. There is no mention of any other region in the text, which could have indicated that they came to India from outside. In contrast, we find that the Zoroastrians talk of a land called Aryanavahyo. The Vedas talk with reverence about the mighty Saraswati River, which has now disappeared below the sands of the Thar Desert and the Rann of Kutch. Recent satellite photographs have clearly demonstrated its ancient course from the Himalayas to the Arabian Sea. The disappearance of the Saraswati River was caused by geological and climatic changes which must also have been responsible for destruction of the Indus cities. There was no invasion from outside.

Similarly, the description of the Tamilagham (Tamil land) found in the Sangam literature of the Tamil language (2) points to only that region of the Indian peninsula which lies to the south of a line stretching roughly from Calicut to the Tirupati hills. The Sangam poets talk about the three Tamil kingdoms of Pandyas, Cholas and Cheras which occupied the southern, northwestern and northeastern parts of this tract respectively. All the activities mentioned in the Sangam literature pertain to people living in this area.

We would therefore be right to conclude that Agastya was the first national integrator of India who brought the two civilizations of the north and south into contact and promoted their fusion into the great Indian civilization of the whole country. In fact, this feat of Agastya was akin to that of king Menes of Egypt, who united its northern and southern parts. But, as is characteristic of India, the synthesis of the northern Aryan and the southern Dravidian civilizations was brought about by a sage and not by a king. The integration has become so perfect that we cannot separate and distinguish the contributions of the two components to the present civilization. The belief that the Sanskrit and Tamil languages came out of the two ends of Shiva’s damaru (Indian Peninsula) is a testimony to this grand synthesis. No wonder sage Agastya is held in high esteem not only all over India, but also in Indonesia.

We can obtain corroboration for Agastya’s epoch derived earlier from Tamil and Sanskrit literature. Tamil literature tells us about the three Sangams which were patronized by 89, 59 and 49 Pandyan kings respectively. The first Sangam was supposed to have been started by Agastya and the last Sangam ended sometime at the beginning of the Christian era. Now we have 197 kings between these two dates. If we assume a span of 20 years for each king on an average, we get a total period of about 4000 years, which would place Agastya’s epoch around 4000 BC, in agreement with the astronomical dating.

Similarly, tradition tells us that Agastya lived at the time of Rama who preceded the Mahabharata war by a couple of thousand years. The epoch of Mahabharata war can be fixed by the date of Bhisma’s death. It is stated that Bhisma died on Maga S 8 on the winter solstice day, i.e. at the start of Uttarayana. At present, this tithi occurs between 20 January and 20 February, which differs from the date of winter solstice, 22nd December, by 29 to 60 days. This difference is caused by the precession of the earth’s axis around the ecliptic poles in the retrograde circuit in 25,725 years, as stated earlier. It causes a slow backward shift of equinoxes and solstices with respect to the nakshatras and the lunar months at the rate of one day in 71 years. As it would take 2060 to 4260 years to produce a shift of 29 to 60 days, the date of Bhisma’s death and consequently that of the Mahabharata war would be 1200 ± 1000 BC. This date can be pushed back to the Krtttikâ epoch of 2300 BC, if we put the beginning of Dhanisthâ exactly opposite to Maghâ (Alpha Leonis). On the other hand, the traditional date of Mahabharata war is placed around 3000 BC. Going back 2000 years, we get 4000 to 5000 BC for the epoch of Agastya, which tallies with the astronomical determination.

We shall end this discussion of the star Agastya (Canopus) by examining the traditional belief that its udaya (helical rising) heralds the end of the rainy season. Table 1 gives some astronomical data about Agastya for the period 6100 BC to AD 1900. Table 2 gives the dates of helical rising of Agastya, which coincides with the beginning of the morning twilight, and its helical setting which coincides with the end of the evening twilight, at the two latitudes 26 and 14°N. First, we see that the midnight culmination of Agastya always occurs in the winter – November/December over this period. Secondly, its helical rising at the latitude of 26°N always occurs after the middle of August. Hence it does herald the end of the rainy season in northern India for several thousand years. But this is not so for the southern part of India with 14°N lat, because the helical rising occurs there before the middle of August when the rainy season is still in progress.