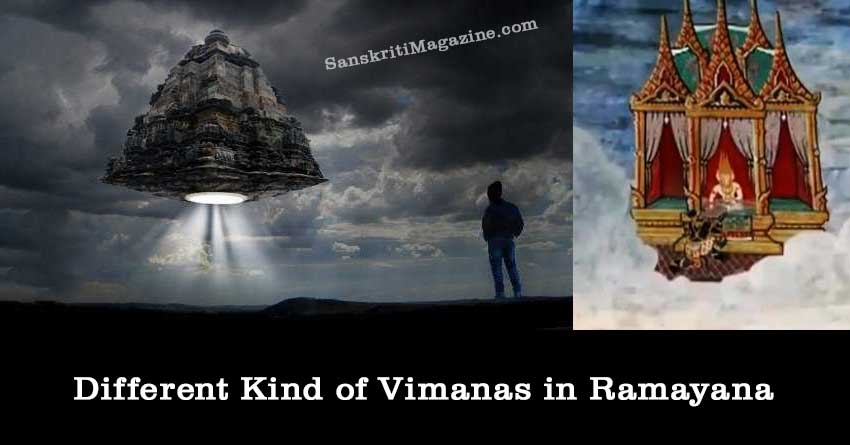 Sita mentioned 3 different types of Vimanas in Ramayana (Ayodhya Kanda, 27 Sarga), where she wishes to follow her husband to forest exile.

Some modern writers claim that Valmiki. who wrote about Vimanas in Ramayana has only imagined flying machines in his era.

If that was just imagination, then why only Valmiki imagined them and why not other writers in these thousands of years ever wrote about them ?

Did they lack imagination ?

Vimanas are mentioned even in Mahabharata and many other ancient Indian scriptures like Puranas.

Translation : Protection under the feet of the husband is better than being on top of a lofty building or in aerial cars or in moving through the sky or in attaining all types of positions. (Ayodhya Kanda, 27 Sarga)

Translation : Then, that Sumantra entered Rama’s palace, which was like top of a mountain, like an unmoving cloud, which contained houses equal to excellent divine cars, like crocodile entering the ocean containing a number of precious stones. Nobody obstructed him.

When Bharata meets Rama after his exile, he sees the bed of Dharbha grass and wonders how a Prince like Rama and his wife Sita slept on grass blades, while they were supposed to sleep in palaces similar to flying chariots of Gods.

Translation : Having ever dwelt in palaces, the upper apartments resembling the chariots of the gods and in turrets, furnished with excellent carpets decked with heaps of flowers, perfumed with sandal and aloes, like unto a bright and towering cloud, re-echoing to the cries of parrots, suprassing the finest of palaces, which wre cool and fragrant with perfules…

Hanuman, upon entering Ravana’s palance in Lanka for the first time, sees Pushpak Vimana (Sundara Kanda, 7 Sarga) and also feels Ravana’s palace is as big as a flying plane.

Translation : Being shone by the best among women like a cloud by lightening, being worshipped, like being carried by the best swans, like an aerial car full of splendor, of good people in sky.

Translation : There the great Hanuma saw a great aerial car, the best among best of aerial cars, shining with the name of Pushpaka with the rays of precious stones, and capable of traveling long distances.

Entire description of Pushpak Vimana was given through Hanuman in Sundara Kanda, 8th Sarga.

Translation : Hanuma saw that aerial plane which rakshasas who were great eaters, with a face beautified by earnings, who roamed around in the sky(space) and thousands of genii with round eyes, crooked eyes and wide eyes capable of great speed carrying it.

At many other instances Valmiki has described separately the flying by Yogic Siddhi, at Ayodhya 27-8, Vimana taking away the dead to the Heaven at Ayodhya 64-5017, and the Vimana of Gods at Aranya 24-2418 Thus Valmiki has differentiated the real and imaginary aeroplanes Yuddh. 123-22.

He also mentions different layers of atmosphere in which different sizes Vimanas could fly.

Translation : I have seen the netherworlds of Rain-god viz., earth and its substrata like atala. vitala, sutala, paataala terrains… and I have even seen those empyrean worlds that were triply trodden by Vishnu, and the intermediary regions of upper and lower worlds where gods and demons combated ghastlily, and because I am that aged I have also seen the unseeable Milky Ocean when it was churned for ambrosia.

Pushpaka Vimana is described similar to a huge Jumbo Jet in Sundara Kanda and Yuddha Kanda.

Vibhishana says that after lunch Rama can reach Ayodhya before sunset if he travels in Pushpaka Vimana.

He says with Pushpaka Vimana, about 2200 KM can be travelled in less than 5 hours.

It Carried Rama, Sita, Lakshmana along with entire Vanara army. So it must be of great dimension.

There were other varieties like fighter jet (used by Indrajit in war to travel at supersonic speeds and emits smoke), Helicopter (used by Ravana to abduct Sita from middle of forest, which landed and took-off without any landing-strip).

While Ravana’s army flew in bunches on Vimanas, Vanaras flew individually in their flying machines.

This description of Vanaras flying suggests that they might have gliders floating on the air currents which were noiseless.

All the Vanaras were not able to fly, only a few could fly and they formed a platoon or a flying squad.

Rama ordered this flying squad to fly forward and search for Daityas (Ravana’s men) hidden in pits or forests or castles.

When they okayed the route, the rest of Vanara army was to march ahead.

This arrangement is just like the modern war tactics. The capacity of their flights was measured in Yojanas.

Jambavanta says, he can fly 80 yojanas as he became old.

Angada says he can fly 100 Yojanas i.e. minimum 400 miles, at a stretch but was not sure of returning.

Hanuman had a much greater capacity, almost limitless.

Mind over Matter in Vedic Science

Why Vedic Rishis asked people to worship Elephant faced Ganesh?
Why Lord Vishnu is Called as Shunyah or Zero in the Vishnu Sahasranama?
Comment