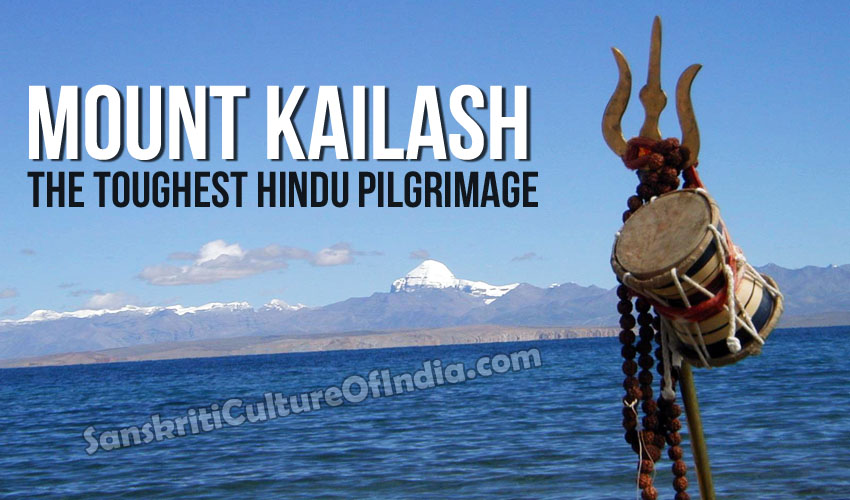 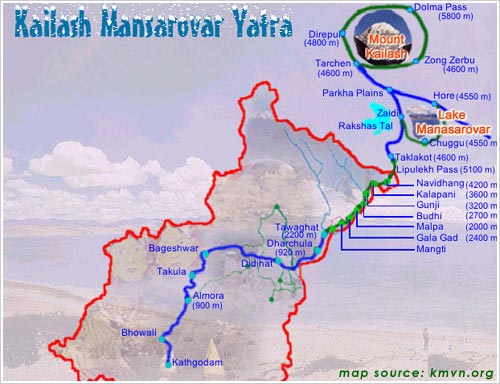 A great mass of rock soaring to over 22,000 feet, Mt. Kailash has the unique distinction of being the world’s most venerated holy place at the same time that it is the least visited.The supremely sacred site of four religions and billions of people, Kailash is seen by no more than a few thousand pilgrims each year. This curious fact is explained by the mountain’s remote location in far western Tibet. No planes, trains or buses journey anywhere near the region and even with rugged over-land vehicles the journey still requires weeks of difficult, often dangerous travel. The weather, always cold, can be unexpectedly treacherous and pilgrims must carry all the supplies they will need for the entire journey.

The landscape around the mountain is rugged and dry but crossed by crystalline blue streams and other bodies of water. Near the sacred mountain is the source of the Indus, Sutlej and Bramaputra rivers and on its south side are two freshwater lakes, the easternmost of which is the highly sacred Lake Manasarowar (Mapam). With an altitude of 14,950 feet, Mansarovar is the highest body of fresh water in the world. The other lake, Rakshastal, also has legendary significance.

In Hinduism, Shiva, the god of destruction and regeneration, resides at the summit of a legendary mountain named Kailasa. Mount Kailasa is regarded in many sects of Hinduism as Paradise, the ultimate destination of souls and the spiritual center of the world. According to a description in the Puranas, Mount Kailash’s four faces are made of crystal, ruby, gold, and lapis lazuli; it is the pillar of the world; rises 84,000 leagues high; is the center of the world mandala; and is located at the heart of six mountain ranges symbolizing a lotus. From it flow four rivers, which stretch to the four quarters of the world and divide the world into four regions.

Kailash is sacred to other religions as well. The Jains call the mountain Astapada and believe it to be the place where Rishaba, the first of the twenty-four Tirthankaras attained liberation. Followers of Bon, Tibet’s pre-Buddhist, shamanistic religion, call the mountain Tise and believe it to be the seat of the Sky Goddess Sipaimen. Additionally, Bon myths regard Tise as the sight of a legendary 12th century battle of sorcery between the Buddhist sage Milarepa and the Bon shaman Naro Bon-chung. Milarepa’s defeat of the shaman displaced Bon as the primary religion of Tibet, firmly establishing Buddhism in its place. While the Buddha is believed to have magically visited Kailash in the 5th century BC, the religion of Buddhism only entered Tibet, via Nepal and India, in the 7th century AD. Tibetan Buddhists call the mountain Kang Rimpoche, the ‘Precious One of Glacial Snow’, and regard it as the dwelling place of Demchog (also known as Chakrasamvara) and his consort, Dorje Phagmo. Three hills rising near Kang Rimpoche are believed to be the homes of the the Bodhisatvas Manjushri, Vajrapani, and Avalokiteshvara.

Pilgrims to Kailash, after the difficult journey getting there, are then confronted with the equally arduous task of circumambulating the sacred peak. This walking around the mountain (clockwise for the Buddhists, counter-clockwise for Bon adherents) is known as a Kora, or Parikrama, and normally takes three days. In hopes of gaining extra merit or psychic powers however, some pilgrims will vary the tempo of their movement. A hardy few, practicing a secret breathing technique known as Lung-gom, will power themselves around the mountain in only one day. Others will take two to three weeks for the Kora by making full body prostrations the entire way. It is believed that a pilgrim who completes 108 journeys around the mountain is assured enlightenment. Most pilgrims to Kailash will also take a short plunge in the nearby, highly sacred (and very cold) Lake Manosaravar. The word ‘manas’ means mind or consciousness; the name Manosaravar means Lake of Consciousness and Enlightenment. Adjacent to Manosaravar is Rakas Tal or Rakshas, the Lake of Demons. Pilgrimage to this great sacred mountain and these two magical lakes is a life changing experience and an opportunity to view some of the most magical scenery on the entire planet.

No pilgrims climb Mt. Kailash; all four religions believe it would be a serious act of sacrilege to set foot on its slopes. Legend has it that the only person to have reached the summit is the Buddhist champion Milarepa (who flew to the top in the 12th century) and that all others who have ventured to defy the taboo have died in the process.The mountain is located in a particularly remote and inhospitable area of the Tibetan Himalayas. Only those in the best health are able to undertake the journey even to the starting point of the circumambulation, let alone walk 52 km in a single day. A few modern amenities, such as benches, resting places and refreshment kiosks, exist to aid the pilgrims in their devotions.