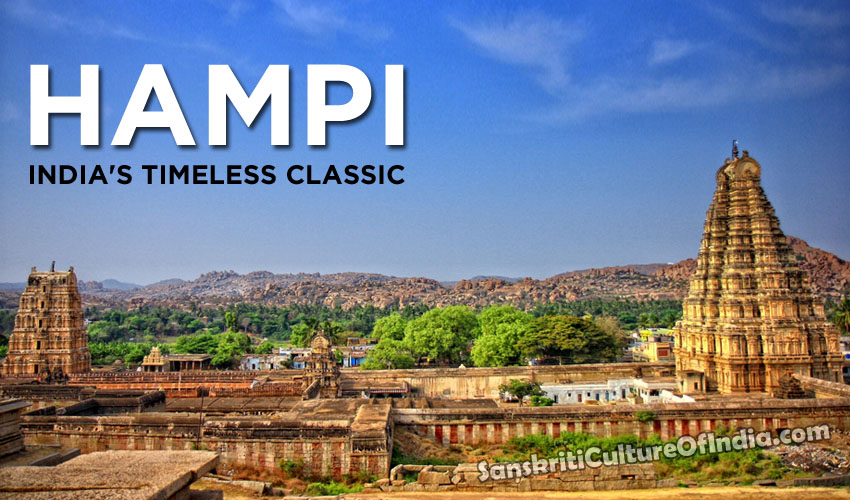 Please click on photographs to see some amazing architect of the forgotten kingdom:

It may be in ruins today, but even this picture of Hampi projects the riches, grandeur and fabulous wealth which the Vijayanagara empire boasted of with much pride. The splendid remains of the magnificent palaces, gateways and creativity of architects silently narrate the story of the prosperous kingdom of the 14th century, and the destruction it was inflicted with by the Moghuls.

Hampi is a village in the northern part of the state of Karnataka in India. Nestled between granite ridges and with the Tungabhadra river flowing in full force on one side, Hampi, the erstwhile capital of the Vijayanagara empire, has now been listed as a UNESCO World Heritage Site. It’s ruins are still charismatic and attract tens of thousands of visitors to this heritage site through out the year, especially during the annual Hampi festival held in December.

A delight for backpackers and pilgrims alike, the temples, palaces, aquatic structures, markets and many such ancient remains are the way Hampi projects its history. The kings of Vijayanagara were popular for their encouragement to the fine arts and renovation of temples. No wonder that you find parts of temples like that of Virupaksha dating back to the 11th century, a time even before the kingdom was established. In fact, the place that we today know as Hampi features in the Ramayana as Kishkinda – a history that Hampi images in the carvings at the Ramaswami temple.

The Vithala Temple Complex of Hampi images the true story behind the empire’s encouragement for art and music. This splendid structure, though ruined by Mughal invaders, has 56 musical pillars, a stone chariot with revolving stone wheels and several monolithic pillars. The House of Victory, built after King Krishnadevaraya won the battle at Orissa, is popular for the elegant carvings on plinth mouldings.

The Lotus Mahal with the geometrical accuracy to ensure a perfect climate inside the queen’s quarters all year round, elephant stables, Pushkarini, the Mahanavami Dibba and Nobleman’s Palace are just a few of the hundreds of structures that Hampi images history with.

Most of the structures lie along the route from Kamalapura to Hampi. One such place is the Dravidian-styled Malyavanta Raghunathaswamy temple that has marine monsters carved on its outer walls. The 6.7-meter tall monolith of Ugra Narasimha in Hampi images Krishnadevaraya’s love for architectural splendours. In fact, the Bazaar at Hampi images truly the town’s eclectic mixture of the ancient and the modern.

Spread across 9 sq. miles, Hampi can easily be reached by road, rail and air through Hospet. While regular buses ply to Hampi from all nearby towns and cities. Those who wish to travel by air need to fly to Tomagallu, Bellary or Belgaum and travel by road from there. Hospet, which is 13 km away, has a railway station and several road transport facilities that help you reach Hampi easily.

And if you thought Hampi is all about ruins, here’s some adventure for the thrill-seekers. The Daroji Bear Sanctuary situated on the outskirts of Hampi offers some great scenic beauty and up-close views of Indian sloth bears. So gear up, pack your bags and set of to the land that has tales to tell.