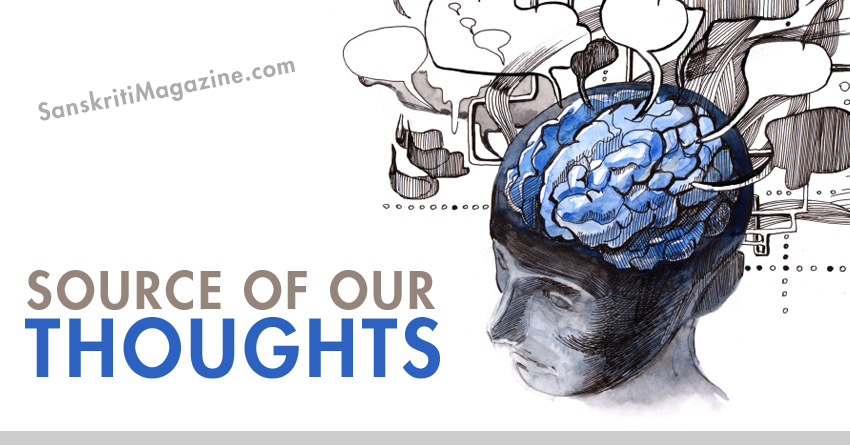 Question: What is the source of our thoughts?

Sadhguru: In terms of content, the source of your thoughts is the accumulation of your sense perceptions. In terms of substance, a thought is just a reverberation – you can give it any form. When the reverberations become continuous, the thought process picks up momentum. Throughmeditation, you calm down the reverberations into stillness. The reverberation that you experience as thought right now would on a lower scale of evolution be instinct. Instinct is not exactly the same as thought – there is much more clarity in instinct than in thought.

A thought can be formed one way or the other – it can be contradictory. Instinct is clear-cut. Animals that are lower on the evolutionary scale seem to be so much surer about their life than human beings, because their reverberations are on the level of instinct. Instinct is always about survival – mostly physical survival. If you look at a worm for example, it seems to be surer – it just knows where to go, because it follows its instinct.

We can say instinct is a lower form of thought, or thought is a higher form of instinct – whichever way you want to look at it. Instinct has minimal reach – it is always about your immediate surroundings. But your thoughts need not be about your immediate surroundings – they can be about anything. That is why you think of so much nonsense that does not really concern you. You think about all kinds of things – heaven, hell, a million years later or a million years ago – thoughts can go anywhere.

In the evolutionary process, as the body evolves, the reverberations that happen within also evolve from instinct to thought. Thought is a certain freedom – it gives you larger access to life. But at the same time, thoughts create total turmoil in human beings. All suffering is because you do not know which way to think and what to do. If you went by your instinct alone, you would know what to do. Life would be much simpler, but also very limited. There would be no possibilities other than survival.

In a way, the process of Shoonya meditation is just that. It is not that your reverberations have stopped, as yet – it is just that you have stopped attaching forms or meanings to them. Being aware enough not to attach forms or meanings to every reverberation that happens within you is an enormous freedom, and it releases you from the past content of your mind. Or in traditional words – it is unbinding your karmic structure, because you are not giving it any form or meaning anymore.

Cancer: Disease of Modern Society
When Is It Okay To Compare Yourself To Others?
Comment