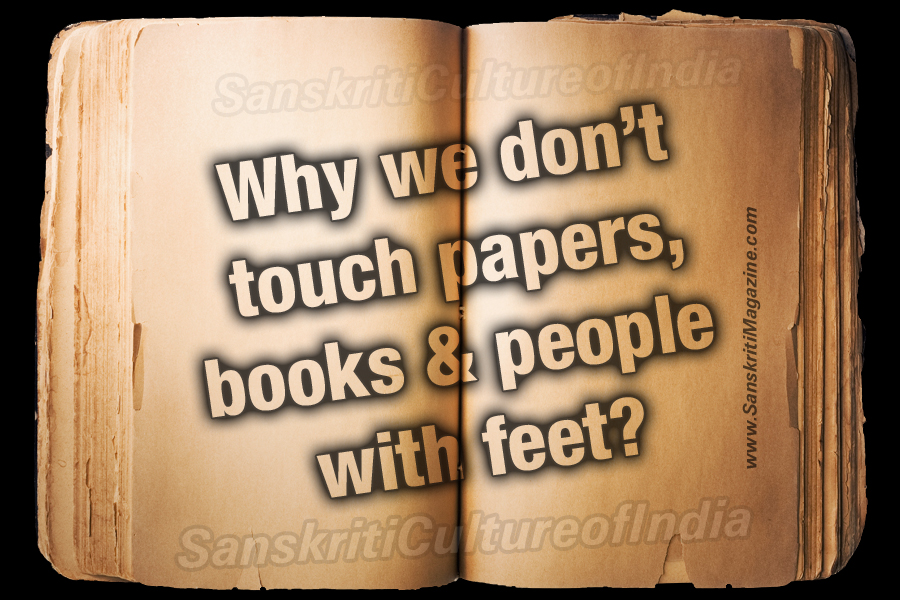 In Indian homes, we are taught from a very young age; never to touch papers, books and people with our feet. If the feet accidentally touch papers, books, musical instruments or any other educational equipment, children are told reverentially touch what was stamped with their hands and then touch their eyes as a mark of apology.

To Indians, knowledge is sacred and divine. So it must be given respect at all times. Now a days, we separate subjects as sacred and secular. But in ancient India every subject – academic or spiritual – was considered divine and taught by the guru in the gurukula. 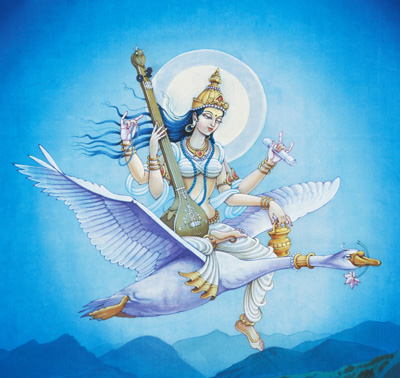 Books represents knowledge. The deity of knowledge is (Goddess of Learning) Saraswati. Touching the books with feet or kicking somebody’s school bag which contains books is considered sinful. It shows disrespect for Saraswati. The bad karma of kicking or nudging a book with the feet results in bad fruit; we do not gain knowledge. Our education suffers. We get less marks in school.

Similarly, one should not let feet touch any musical or educational instrument. Hindus respect every object from which knowledge is gained. Children in India respect even new notebooks, pens, pencils, etc., by taking them to their nearest mandir (temple) so that the pujari (priest) may sanctify them at Bhagwans’s feet.

If one’s feet accidentally touch a book or even a person, then one should mentally pray for forgiveness, as well as ritually bow down and touch that person’s feet as a gesture of regret and also ask him to pardon one. Such humility develops one’s character immensely. Additionally, knowledge becomes useful for only he who is humble, according to the Sanskrit sutra; vidya vinayena shobhate.

The custom of not stepping on educational tools is a frequent reminder of the high position accorded to knowledge in Indian culture. From an early age, the wisdom fosters in us a deep reverence for books and education. This is also the reason why we worship books, vehicles and instruments once a year on Saraswathi Pooja or Ayudha Pooja day, dedicated to the Goddess of Learning. In fact, each day before starting our studies, we pray:

O Goddess Saraswati, the giver of
boons and fulfiller of wishes,
I prostrate to You before
starting my studies.
May You always fulfill me.

Children are also strongly discouraged from touching people with their feet. Even if this happens accidentally, we touch the person and bring the fingers to our eyes as a mark of apology. Even when elders touch a younger person inadvertently with their feet, they immediately apologize.

To touch another with the feet is considered an act of misdemeanor.

Why is this so?

Man is regarded as the most beautiful, living, breathing temple of the Lord!. Therefore, touching another with the feet is akin to disrespecting the divinity within him or her. This calls for an immediate apology, which is offered with reverence and humility.

Thus, many of our custom are designed to be simple but powerful reminders or pointers of profound philosophical truths. This is one of the factors that has kept Indian culture alived across centuries.

Why I Killed Gandhi
Significance of Havan (Homam)
Comment