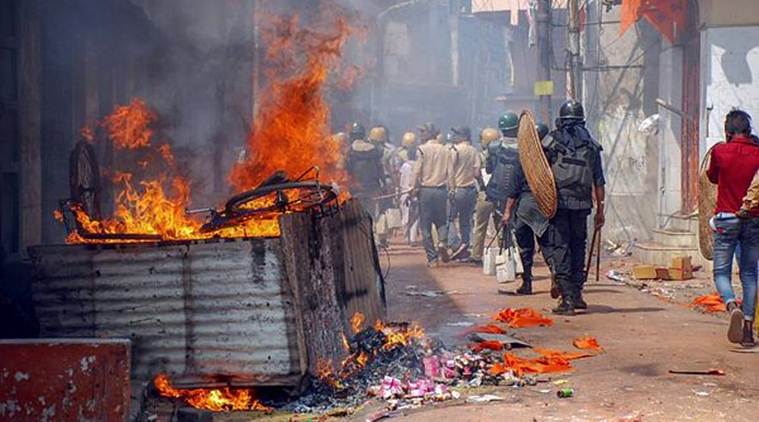 Sources said a Ram Navami procession was heading towards GT Road in Asansol when the group was allegedly attacked by unknown miscreants from Jopparpatti area.

Fresh violence was reported from West Bengal’s Burdwan district after a Ram Navami procession was allegedly attacked by unknown miscreants, fueling tension in the area that has already witnessed a clash between members of two communities, leading to the death of one person and injury to several police officers.

The incident on Tuesday evening took place in West Burdwan’s Asansol area near Satellite Township. Sources said a Ram Navami procession was heading towards GT Road in Asansol when the group was allegedly attacked by unknown miscreants from Jopparpatti area. This triggered tension in the area and people from both sides started pelting stones at each other.

“The procession was heading towards GT road when the incident took place. The situation is under control. Heavy police cover have been deployed in the area,” a police officer said. However, TMC leader and Asansol Mayor Jitendra Tiwari said no violence took place after the Ranigunj incident on Monday, urging the people to maintain peace in the area. “No fresh violence has been reported in Asansol,” Tiwari told the Indian Express over phone.

So far, three casualties have been reported due to violence over Ram Navami processions from Purulia, Ranigunj in South Bengal and Kankinara in North 24 paraganas. On Monday, one person died and five police officers sustained injuries when members of two communities clashed at Raniganj in West Burdwan over a Ram Navami rally taken out under the banner of Ram Navami Udyapan Committee. Both BJP and VHP supporters participated in the rally. Trouble started when the procession was passing through Rajpara – a Muslim-dominated area – and members of the Muslim community prevented the Hindus from singing.

While 18 people have been arrested, Section 144 (prohibit an assembly of more than four people in an area) of the CrPC has been imposed and heavy police force deployed at Raniganj