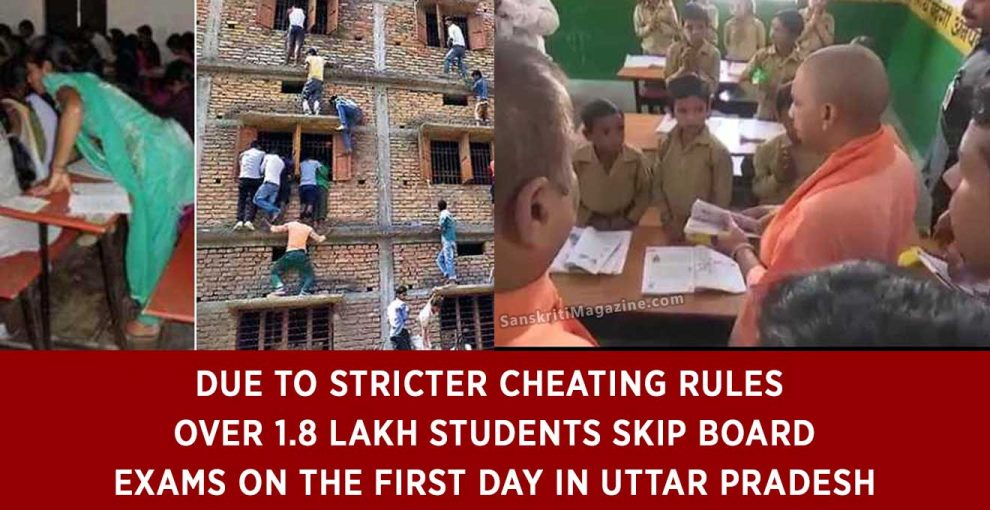 More than 1.8 lakh students did not appear for their first day of board exams in Uttar Pradesh. The large percentage of absentee students is being attributed to the strict measures state government has taken to ensure a cheating free exam this year.

Its Yogi Adityanath wave trending in Uttar Pradesh now. Copying during exams has stopped. Uttar Pradesh board exams: Over 1.8 lakh students absent on first day of the exam. Of course it’s Yogi effect that has worked magic.

It’s indeed great that yogi government has ensured action against exam malpractices. He is also towards analyzing the reasons for putrefied status of education system in UP. In Naini, a Special Task Force arrested two teachers and the headmaster of a school for helping students cheat. The system has failed the students compelling them to Indulge in malpractices.

Over 1.8 lakh students did not appear for the Uttar Pradesh board examinations on the first day, PTI reported on Wednesday. The examinations for Class 10 and 12 began on 7th of February.

“On the first day of examinations on Tuesday, 1, 80,826 students did not appear,” said Uttar Pradesh Deputy Director for Education Vikas Srivastava. “It included over 53,100 high schools and over 1.27 lakh intermediate students.”

An unidentified Education Department official told PTI that the absentees were the result of measures, including installation of CCTV cameras in exam halls and using local intelligence agencies to check the activities of the education mafia, initiated by the Adityanath government. Over 67 lakh students enrolled for the state board exams this year. Of these, over 37 lakh enrolled for the Class 10 examinations and 29.8 lakh for the Class 12 exams.

In Hardoi, 11,141 students did not attend the examinations on 6th of February. In Azamgarh, 8,842 students were absent from the exams, 6,330 in Jaunpur and 6,299 in Gonda. Centres in Firozabad, Manipuri, Hathras, Moradabad, Gorakhpur and Sant Kabir Nagar also saw a high numbers of absentees.

Meanwhile, a Special Task Force of the Uttar Pradesh Police busted a copying racket and arrested three individuals, including the headmaster of a school in Naini city on Tuesday, the Hindustan Times reported. Additional Superintendent of Police (Special Task Force) Praveen Singh Chauhan said Anil Kumar, a teacher at Bal Bharti School in Naini, was found dictating answers to students in a classroom despite the presence of CCTV cameras.

When the Special Task Force investigated the matter, it found that school principal Shiv Prasad and another teacher, Shiv Shankar Mishra, took bribes of Rs 2,000 to Rs 3,000 each from the students to help them cheat. All three were arrested, Chauhan said.

The objective behind deploying STF and local intelligence agencies this year was to conduct copy free exam and preventing the education mafia in causing mischief said the Deputy Chief Minister Dinesh Sharma.

He said that the government had taken the help of the STF and local intelligence agents in doing away with education centres which were infamous for mass cheating. Thus, the number of examination centres this year has also come down from over 12,000 to 8,500.The Deputy Chief Minister also holds the portfolio of secondary education department and had made it clear that anyone found practicing any unfair means during the exams would be dealt with strictly.

“We have studied all the possible ways and means of unfair means during the examinations. Those appearing in an exam impersonating someone else or involved in changing answer sheets before they reach evaluation centres will not be able to do so. Effective measures have been taken,” Sharma told PTI. Some of the measures adopted to prevent cheating include frisking students before they enter the examination halls, dividing centres in sectors, appointing administrative officers as sector magistrates and issuing prohibitory orders within 100 metres of the centre.

The Board has directed exam centre coordinators to update details of absentees and those caught in malpractices. The Board has opened online portal for the same and has asked to update the details on daily basis after the completion of each paper.